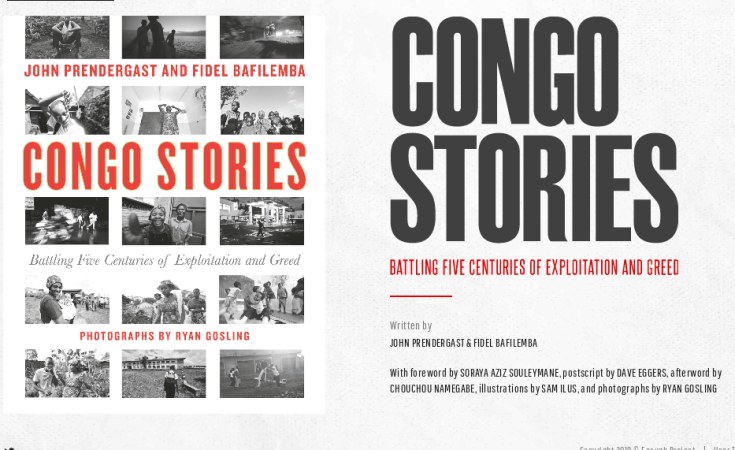 Thirteen activists and NGOs profiled in the book “ CONGO STORIES: Battling Five Centuries of Exploitation and Greed ” for their heroic efforts in creating a better future for the Democratic Republic of Congo were awarded “Congo Stories Upstander Fund” grants. The book is co-authored by Enough Project Founding Director John Prendergast and Congolese activist Fidel Bafilemba, featuring photographs by Ryan Gosling.

Gosling, Bafilemba, and Prendergast donated 100 percent of their proceeds from the book to create the Fund. The Fund is aimed at supporting human rights, anti-corruption, and responsible natural resource management efforts in Congo.

Ryan Gosling said: “The Congolese activists, whose stories are featured in our book, continue to work tirelessly to shape a better future for their country. The proceeds from ‘Congo Stories’ will support some of those change-makers as they educate, organize, and provide desperately needed services, as well as fighting corruption and promoting human rights.”

John Prendergast said:“We created this book to expose an astonishing history of exploitation and greed that directly connects Congo to Americans and Europeans going back centuries right up to the present. The book seeks to help amplify the voices of Congolese heroes who have bravely challenged that legacy. They provide inspiring answers about what can be done to transform their country. With these grants to Congolese upstanders and their organizations, we hope to directly support local efforts to create the kind of change Congolese people hope for and deserve."

Dr. Denis Mukwege, Nobel Peace Prize winner and Founder and Medical Director, Panzi Hospital and Foundations: "I am pleased to have worked over many years with the Enough Project in the fight for a truly peaceful, democratic Congo. ‘Congo Stories’ brings much-needed attention to many of the issues that we are jointly tackling together, including ending sexual violence and stopping the flow of blood minerals, which are killing Congo’s children, into our electric cars and other high technology items. The funds from this grant will allow us to respond more rapidly to emerging crises in South Kivu province, including the deployment of emergency medical rapid response teams from Panzi to treat victims of mass rapes. We are grateful for this assistance."

Fidel Bafilemba, Co-Founder, The Lumumba Children's Library and Learning Center: ‘Congo Stories’ is more than just a history book. It's a tribute to the foundation of the Kongo Kingdom and a testament to how Western exploitation has set Kongo/Congo backwards. Congo has been crucially important in making the western world what it is today, but major changes are needed in the relationship between Congo and the West in order to help bring peace to the country. Proceeds from the ‘Congo Stories’ book will help raise awareness about the true history of the Kongo/Congo, as funds will help construct the Lumumba Children's Library in Goma.”

Neema Namadamu, Founder, SAFECO: “As I said in ‘Congo Stories,’ when I went back to the village of my birth after being away for 25 years, the same village where I contracted polio as a toddler, I was surprised to see how nothing had changed for girls. They still had no help for their monthly periods and so, as adolescents, were still missing a week of school each month until their fathers married them off for the dowry at 14 or 15 years of age. So we started an enterprise to make feminine hygiene kits and built an all-girls school to educate and empower them. And now, with the funds we receive from the profits of this book, we will mobilize the village communities to begin registering the dates of every birth and marriage in our area. We are doing this because the legal age of marriage in DRC is 18, but since there are no records of these events in the rural areas, a girl can be married off at 13 or 14. If questions arise, the father can lie about her age. No more! Now there will be records that can assist us in our fight to end early and forced marriage of young girls.”

Amani Matabaro, Founder and Executive Director, ABFEC: “The funds are important for our work because they will contribute to making a difference in our everyday actions on the ground. They are being used in youth engagement through peace initiatives programming at the grassroots level, and that is the foundation of our glimmer of hope.”

Dominique Bikaba, Executive Director, Strong Roots Congo: “The funds from ‘Congo Stories’ will not only support our programs financially, but also bring the right message from the grassroots that it is possible to have a different Congo. A Congo where peace prevails, a Congo where local communities and indigenous peoples are thriving together with wildlife for the best environment, a Congo that requires fair treatment and consideration for the best of the global community.”

Rebecca Kabugho, 2017 U.S. State Department Award for International Women of Courage winner and LUCHA activist: “‘Congo Stories’ is a great opportunity for me and our movement to share the history of the work of non-violent struggle that we are undertaking in Congo and which brings change in the life of our population. It’s a book where people can learn great stories from ordinary Congolese citizens. The funds are very important for the movement because they will help us to extend the movement and bring more young people to adhere to the philosophy and the movement.”

Petna Ndaliko Katondolo, Founder and Artistic Director, Yolé! Africa: “Training youth with digital storytelling and critical thinking skills is a two-pronged approach to addressing entrenched sociopolitical problems in our region. On one level, it equips young people with marketable skills that help them achieve economic autonomy; on another level it allows members of our community to share their own stories and introduce new perspectives about Congo to global audiences.”

Justine Masika Bihamba, Founder and Executive Director, SFVS: “Girls in mining areas who prostitute themselves and those who are sexually exploited do so not because they want to, but rather because they have no occupation and no way to earn a living. Hence awareness of youth outreach on human rights at mining sites is needed in these areas. To solve this, the Women's Synergy for Victims of Sexual Violence (Synergie des Femmes pour les Victimes des Violences Sexuelles) had thought of occupying all our daughters with entrepreneurship in small businesses, to enable them to earn something that could meet their specific needs.”

Dr. Namegabe Murhabazi, Founder and Program Director, BVES: “Unfortunately, I am witnessing 55 years of this sad history of exploitation and permanent greed. I am also an activist for positive change for the present and future for the benefit of the Congolese generations, mainly through the access for all children and young people, girls and boys, to quality education and protection. I am very pleased to have been selected among the few beneficiaries of the ‘Congo Stories’ financial donation, which I assigned immediately to the project BVES to support reintegration schooling for children and young people affected by armed conflict in the province of South Kivu, Democratic Republic of the Congo.”

Janvier Murairi, Co-Founder and President, ASSODIP: “Slavery is one of the oldest and most heinous crimes the world has known. Many of our contemporaries think that slavery belongs to history, to the past, far from the present. Slavery practices are still very common but unfortunately little known or poorly understood, even by lawyers and many legal professionals. It is more than urgent that slavery is known to communities, intellectuals, legal practitioners, and victims. It must be defined, recognized and repressed by all the states of the world. The financial support that I have received will be a golden opportunity to promote awareness of slavery. I am convinced that the awareness of slavery by the public is key to contributing to the reduction and elimination of this denial of human rights. This financial support will strengthen my work in the fight against this inhuman practice in my country and in the world.”

For five centuries right up to the present, Americans and Europeans have benefited enormously from an astonishing history of exploitation of the people and natural resources of a country in the heart of Africa: the Democratic Republic of the Congo.  The people of Congo are fighting back, risking their lives to resist and alter the deadly status quo. And human rights movements led by young people in the U.S. and Europe are supporting those Congolese change-makers. As a result, the way the world deals with Congo is finally changing.

Fidel Bafilemba, Ryan Gosling and John Prendergast traveled to Congo in order to better understand that history and to document stories of Congolese upstanders who are building a better future for their country, and young Congolese overcoming enormous odds just to go to school and care for their families.

Through Gosling’s photographs of Congolese daily life, Bafilemba’s profiles of heroic Congolese activists, and Prendergast’s narratives of the extraordinary history and evolving social movements that directly link Congo with the United States and Europe, CONGO STORIES provides windows into the history, the people, the challenges, the possibilities, and the movements that are impacting the course of Congo’s destiny.

Tagged:
Copyright © 2019 ENOUGH Project. All rights reserved. Distributed by AllAfrica Global Media (allAfrica.com). To contact the copyright holder directly for corrections — or for permission to republish or make other authorized use of this material, click here.

Djibouti Looks to Ethiopia to Gauge Its Economic Future
Company