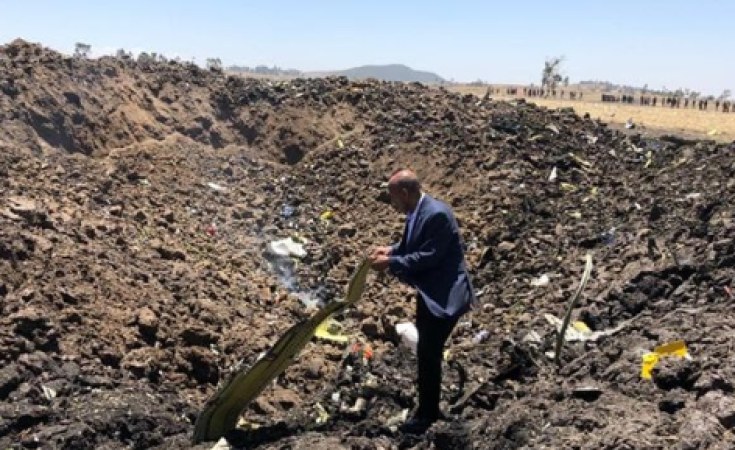 Ethiopian Airlines/Facebook
CEO Tewolde GebreMariam at the scene of the crash (file photo).
The Nation (Nairobi)
By Ouko Okusah

Investigations into troubled aircraft manufacturer Boeing continue to make headlines in America where federal prosecutors are said to be quietly gathering information to ascertain if criminal conduct contributed to the two deadly crashes in Ethiopia and Indonesia.

This emerged a day after some Kenyan families that lost their loved ones in the March 10 Ethiopian Airlines plane crash moved to court to sue the troubled jetliner for punitive damages.

"Boeing should be punished for its recklessness by designing and manufacturing a defective planes that caused innocent lives," said Mr Shakespear Feyissa of US-based Friedman Rubin and Shakespear law firm.

He spoke during a meeting with their Kenyan counterparts led by lawyers Irungu Kang'ata (Murang'a Senator) and Gachie Mwanza on the second day of the pre-trial conference in Seattle, USA.

Five months after the plane crashed in Addis Ababa, Ethiopia, killing all on board including 32 Kenyans, only eight families have sued Boeing.

"Out of ignorance, some of the affected families have opted to go after Ethiopian Airlines in the belief that that's the only compensation they are entitled to," said Mr Kang'ata.

"They are unaware that they can actually come to America and engage a US-based attorney and sue the aircraft manufacturer."

Kangata and Gachie Mwanza advocates have teamed up with Friedman Rubin and Shakespear on a civil conspiracy suit filed at the Northern District Federal court in Illinois.

Their claim is that Boeing and US regulator Federal Aviation Administration colluded to authorise release of an unsafe aircraft into the market.

It is some of these allegations that the US investigators are said to be keen on ascertaining in the probe targeting top ranking officials of Boeing, the maker of the 737 MAX aircrafts.

The lawyers have also accused Boeing of negligence and bad conduct.

"Although it knew the planes were defective, Boeing continued to fly them even after the Lion Air plane crashed in Indonesia," said Mr Michael White.

Although the attorneys have remained tight-lipped on the compensation amount, the Nation has learnt from reliable sources that they will be going for nothing short of $800 million (Sh82.6 billion).

"We have had cases where punitive damages have ranged from $50,60,100 million (Sh5.2 billion) for one person for bad conduct," Mr White noted.

Families of Ethiopian Crash Victims Urged to Accept Compensation
Tagged:
Copyright © 2019 The Nation. All rights reserved. Distributed by AllAfrica Global Media (allAfrica.com). To contact the copyright holder directly for corrections — or for permission to republish or make other authorized use of this material, click here.