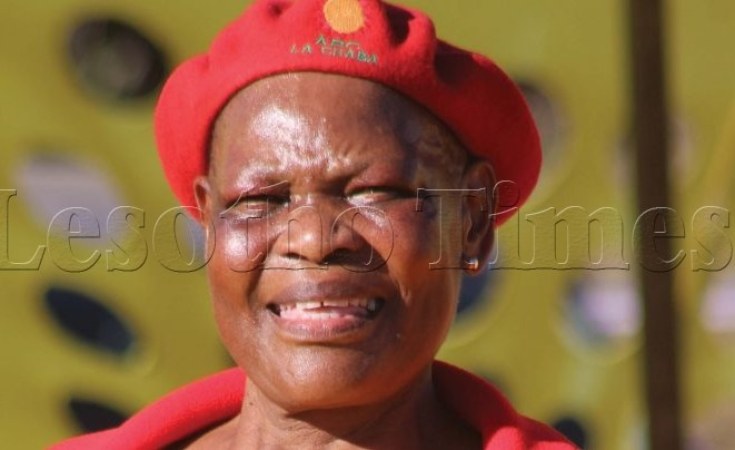 Barely a week on from her horrific knife attack in her Lithabaneng home, All Basotho Convention (ABC) deputy spokesperson, 'Matebatso Doti, is praying for a quick recovery and itching to return to the cutthroat arena of the faction-ridden politics of the ABC.

The former Social Development minister also wants her assailants to be swiftly brought to justice for the brutal "assassination attempt" which almost ended her life in the early hours of last Friday.

Ms Doti said this from her hospital bed at the Makoanyane Military Hospital in Maseru and her remarks were beamed live through giant speakers to ABC supporters at the rally held by the Professor Nqosa Mahao led faction in Matsieng early this week.

Speaker after speaker at the rally, including Prof Mahao, condemned the brutal attack and called for decisive government and police action to protect women from the cases of violence which are on the rise in the country.

"I am still alive and recovering well," Ms Doti said to loud cheers from the hundreds of ABC supporters who graced the Matsieng rally.

"I am very thankful that I'm recovering and I hope to be with you soon. Justice has to be served in connection with this attack," added Ms Doti.

The Lithabaneng legislator is lucky to be alive after being stabbed five times by eight unknown assailants in what she said was an assassination attempt at her Lithabaneng, Maseru home in the early hours of Friday.

The assailants told Ms Doti that they had been sent to kill her for siding with Prof Mahao in the ABC power struggle. They also robbed her of M4000 that was deposited in her bank account and two guns that belonged to her late husband who had retired from the army by the time of his death in 2017.

Two separate statements released last Friday by the government and the police suggested that the attack on Ms Doti was purely a criminal act of assault, theft and robbery by criminals who made off with her valuables.

"The government is relieved that attackers spared Honourable Doti's life even though she was injured and the suspects ran away with some valuables and money.

"Unfortunately, this incident is one of the many attacks that have become common where perpetrators murder and steal people's property and deprive them of their freedom. These barbaric acts are done by groups of people who have declared war against the rule of law.

"The government will capacitate all the security agencies to protect citizens against these law breakers who seem hell-bent to humiliate, destabilise and destroy Basotho's lives by attacking their leaders," the government said in its statement.

On its part, the Lesotho Mounted Police Service said, "Honourable Doti was stabbed several times with a seemingly sharp object".

"These men (assailants) stole two firearms, Automated Teller Machine (ATM) cards, a wallet that had about M400 and car keys. They sped off with one of her (Ms Doti's) vehicles but they later abandoned it on the roadside," the police statement said. The police also appealed to the public to report any information that may lead to the arrest of the suspects.

While the government and police statements suggest that Ms Doti was the victim of a robbery, the legislator and her ABC allies are convinced that the attack, which left her in a pool of blood, was a politically motivated bid to eliminate her for siding with Prof Mahao in his struggle for control of the ruling party with former members of the party's national executive committee (NEC). The former NEC's mandate expired just before the ABC's February 2019 elective conference where Prof Mahao, Ms Doti and others were elected into the NEC. Prof Mahao was elected deputy leader and Ms Doti deputy spokesperson. Three other Mahao allies, Samuel Rapapa (chairperson), Lebohang Hlaele (secretary general) and Montoeli Masoetsa (spokesperson) also clinched the powerful posts in the new NEC.

But the ABC has not known peace and stability after Prof Mahao's election was rejected by the old NEC and by party leader and Prime Minister, Thomas Thabane.

The alleged assassination attempt on Ms Doti comes against the background of warnings of the ABC conflict spiraling into bloodshed. The warnings were delivered in February this year by senior politicians such as Habofanoe Lehana (Trade and Industry minister), Keketso Sello (Mining minister) and the party's Rothe constituency legislator, Mohapi Mohapinyane. Prof Mahao, Mr Rapapa and Mr Hlaele subsequently beefed up their security after alleging that they had received reports of plots by their party rivals to assassinate them.

At the Matsieng rally, Prof Mahao led the way in praising Ms Doti and condemning the brutal attack on her. He said the legislator became the "latest in the long list of ABC women whose lives have been threatened in the past six months since the (party's February 2019) elections". He however, did not say who had threatened the female ABC members as the power struggle continues between the old and new NEC factions.

"'Mé Doti. What a gentle soul. She has a heart of gold. She calls me twice every day always consulting with me to check if we (the Mahao faction) are still on track. Her attack adds to a long list of ABC women whose lives have been threatened in the past six months since the election. Some have received threats over the phone," Prof Mahao said.

He said that it was disheartening that Ms Doti was attacked just a few days before women's month in August.

Women's month was originally aimed at commemorating South African women's spirited fight against repressive apartheid laws in the 1950s. On 9 August 1956, more than 20 000 women from different sections of society united in a mass demonstration to the Union Buildings in Pretoria. They protested against the unjust pass laws enforced on women in South Africa. Now women's month commemorates women in general, including Basotho women's fight for emancipation form socio-cultural and economic ills.

Prof Mahao said local women should take the cue from their South African counterparts and stage protests against gender-based violence.

"If you are able to, ladies please go out there and call all women across the country to join you in telling the government that enough is enough. We can no longer stand and watch these heinous crimes that our mothers, daughters and sisters endure. Some have been murdered mercilessly. This has been going on for far too long and there are no signs of it coming to an end.

"I know that you are great worshipers but God helps those who help themselves. It is now time to confront the government and remind them that their one of the major mandates is to ensure the wellbeing of the citizens so that a Mosotho woman like 'Mé Doti can sleep soundlessly in her home.

On his part, ABC secretary general, Lebohang Hlaele said whoever attacked Ms Doti and all other women were cowards for targeting the most vulnerable members of the society.

"When I had of 'M'e' Doti's ordeal I prayed that God ends the lives of her attackers. I prayed that they burn in hell. I know that God has heard my prayers and he will eventually answer me," Mr Hlaele said.

I Will Fight Mahase to the Bitter End - Hlaele

Political Infighting Turns Deadly in Lesotho
Tagged:
Copyright © 2019 Lesotho Times. All rights reserved. Distributed by AllAfrica Global Media (allAfrica.com). To contact the copyright holder directly for corrections — or for permission to republish or make other authorized use of this material, click here.