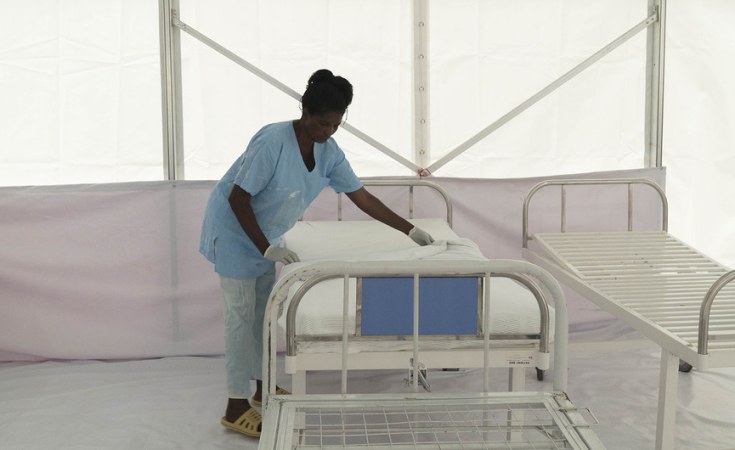 Michele Sibiloni/UNICEF
A nurse prepares a bed for a suspected case of Ebola in the isolation unit at Bwera hospital, Kasese district, located near the border with the Democratic Republic of the Congo on 3 September 2018.
The New Humanitarian (Geneva)
By Samuel Okiror

Kampala — Uganda has launched its largest trial of a new experimental Ebola vaccine, as rising cases of the deadly virus in neighbouring Democratic Republic of Congo continue to raise fears of a wider regional outbreak.

A successful trial would boost the case for the vaccine - manufactured by Belgium-based Janssen Pharmaceutica - to be used in Congo, where 1,888 people have been killed and 2,816 infected in the second deadliest Ebola epidemic on record.

An unlicensed experimental vaccine produced by American pharmaceutical company Merck has so far inoculated more than 180,000 people in Congo, but there are concerns stocks may dwindle as the epidemic enters its second year and cases rise in the main eastern city of Goma.

Experts believe the Janssen vaccine will provide better immunity and could protect people against several different strains of Ebola, but there has been resistance to its use in Congo due to fears its two-stage inoculation regime could sow confusion.

The two-year trial in Uganda will target around 800 frontline health workers in the western district of Mbarara as well as non-medical personnel, including cleaners, mortuary attendants, and burial teams.

The vaccine has already been tested on more than 6,000 people in Europe, the United States, and Africa, and has proved safe, though demonstration of its efficacy in humans is still lacking as it has not been used in the context of an outbreak.

"This is welcome news. The world needs an Ebola vaccine, especially one that can give a strong and longer-lasting immunity," Pontiano Kaleebu, a Ugandan researcher leading the trial, told The New Humanitarian.

"Previous studies with this vaccine have been promising," Kaleebu said. "We want to get more information and Uganda's trial will be important."

Ebola analysts, including the World Health Organisation's Strategic Advisory Group of Experts (SAGE), have repeatedly called for the Janssen vaccine to be introduced in Congo to maximize the number of people protected from the virus.

"In the DRC, WHO supports the introduction of a second vaccine, in line with recommendations from the SAGE, but subject to the appropriate national approvals," said Christian Lindmeier, a WHO spokesperson.

Efforts to introduce the Janssen vaccine had been opposed by Congo's minister of health, Oly Ilunga, who argued it could cause confusion in communities due to different vaccination schedules. The Janssen vaccine requires two doses 56 days apart - unlike the Merck vaccine, which only requires a one-off dose.

But Ilunga resigned from his post last month and has since been replaced by Jean-Jacques Muyembe - director of Congo's National Institute of Biomedical Research - who is thought to be more receptive to the Janssen vaccine.

"There was a blockage before with the former minister of health but the door [to introduce a second vaccine] is no longer closed," said Claude Mahoudeau, emergency coordinator for Ebola for the Alliance for International Medical Action, or ALIMA, one of the main health NGOs involved in the response to the outbreak in Congo.

Insecurity and distrust of responders have hampered Ebola relief efforts in Congo despite the effectiveness of the Merck vaccine. Health workers say inoculating more people will only help end the outbreak if there is greater trust and engagement of local communities.

"Vaccination is one tool we have to control this outbreak, but it cannot be the only tool," said Kate White, emergency medical manager for Médecins Sans Frontières. "The other tools are just as important: community participation in the response... making sure they are on board and understand [what responders are doing]."

Uganda has been on high alert following the death of three members of the same family, including a five-year-old boy, who crossed from DRC into the western district of Kasese in June. The country has had to deal with several past Ebola outbreaks, including one in the northern town of Gulu that cost 224 lives between 2000 and 2001 - the third deadliest epidemic on record.

The Uganda Vaccine Trial - How African Researchers Are Tackling Ebola

Mozambique Stepping Up Surveillance Against Ebola
Tagged:
Copyright © 2019 The New Humanitarian. All rights reserved. Distributed by AllAfrica Global Media (allAfrica.com). To contact the copyright holder directly for corrections — or for permission to republish or make other authorized use of this material, click here.