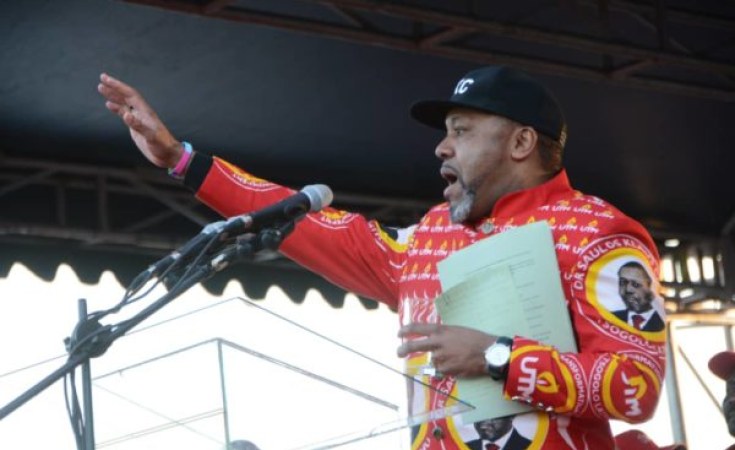 Attorney General (AG) Kalekeni Kaphale on Monday afternoon in historic presidential elections nullification petition case, continued to cross-examine the country's immediate past vice-president Saulos Chilima, the first petitioner, drawing him to tell the court that he exaggerated the level of irregularities as his claim only relates to 0.5% of the total polling station of 5002 polling centers.

Chilima has told the court that level of irregularities were not a 'plethora' Kaphale continues cross-examination of presidential candidate Saulos Chilima.

Chilima had claimed in his petition that the May 21 elections were married by "a plethora of irregularities " and listed seven types of such.

But turning up for Malawi Electoral Commission (MEC) in his capacity as government's chief legal adviser, Kaphale during cross-examination on day three of UTM leader being in the witness box, he made Chilima go through the affidavits filed in his petition where he mentionied the names of the monitors and the polling centres where the alleged bribery occurred.

One of the affidavits by UTM monitors say that Brown Mpinganjira, a senior member of Democratic Progressive Party (DPP), was seen providing money to monitors and also voters. The affidavit claims police had blocked UTM monitors from taking pictures of the bribery.

Kaphale asked Chilima about the media reports that UTM monitors have not been paid in which agreed it is true. He then asked whether paying monitors is a bribe in which Chilima said monitors deserve to be paid as contractual obligation for the work done.

The Attorney General also argued against an affidavit which mentions alleged bribery by DPP Regional Governor for South Charles Mchacha in which he said the affidavit doesn't mention bribery of monitor.

Intimidation of Monitors = 0.16% of all polling stations

Bribing of election monitors= 0.019% of all polling stations

Presiding staff influencing voters who to vote for= 0.13% of all polling stations

Unauthorized persons being found with ballot papers and ballot boxes= 0.12% of all polling stations

Arrest of persons for polling offences= 0.06% of all polling stations

Failure to deliver the ballot papers under conditions of absolute security = 0.04% of all polling stations .

In the final analysis, the former vice-president was forced to take back use of the word "plethora" on these six cited irregularities as it did not reflect the situation on the ground.

Here is part of the gruelling cross-examination:

Kaphale: Dr Chilima having agreed with me that the centers cited in your witness statement as being affected by irregularities have nothing to do with the said irregularities, what percent of the centers is remaining?

Kaphale: In your petition, one of the grounds for asking the election results to be nullified is that you say the elections were affected by a "plethora" of irregularities. What is the meaning or another word for the word " plethora"?

Chilima: A lot, my lady and my lords.

Kaphale : The Dictionary meaning of the word "Plethora" is "a large or excessive amount". Are you aware of that?

Kaphale: Would you then say5 percent of anything is a plethora, a large amount or an excessive of anything as your petition alleges?

Kaphale: Would you then agree with me that your use of the word "plethora" in discribing the extent of the irregularities was wrong?

Kaphale: So as far as you are concerned you are telling the nation that .5 % of anything is a large percent or excessive percentage of 100 percent of that thing?

Chilima: Yes, my lord my lady.

Kaphale: Thank you. We have to stop there.

Attorney General will Tuesday continue the cross examination of Chilima on the allegation of alteration of votes and on other cited irregularities.

Meanwhile, lawyers for Chilima, in fear of Kaphale's cross-examination for Tuesday where he is expected to grill the UTM leader on each and every exhibits which are close to 2000, have asked for a private meeting for the court on case management.

Kaphale has made it bleak that he will not agree to any limitation to his cross-examination. The Court has since asked Chilima's lawyers to indicate the agenda of the meeting and that such private meeting can only take place on Wednesday. This means Chilima will continue to be grilled Tuesday without any protection.

The hearing, which other quarters had suggested that will take 24 days, promises to be one of the longest in the history of Malawi with over 800 witness available and meant to be cross examined in the matter.