Kenya: Here is the Grand 'Mkokoteni' Wedding Which Has Gotten Kenyans Talking 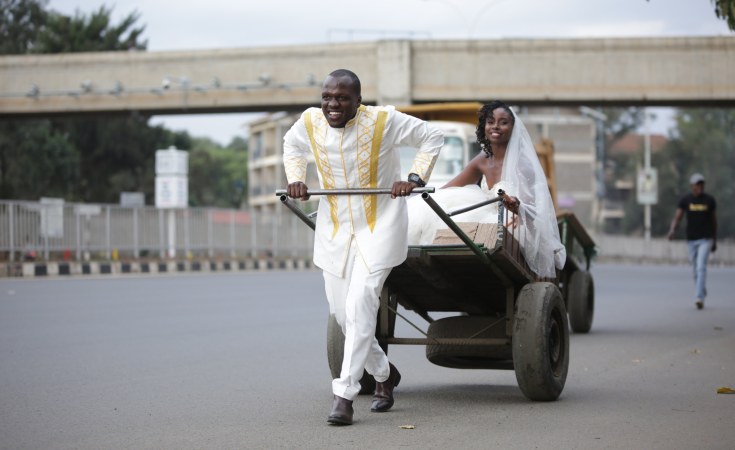 Boniface Mwangi/Twitter
The bride and groom on their wedding day.
Nairobi News (Nairobi)
By Sylvania Ambani

A city couple has managed to make their wedding day an occasion that guests will remember for a long time to come for its simplicity and uniqueness.

The bride is all smiles, same as the groom who is ferrying her along the streets of Nairobi to their wedding venue at Pawa 254.

While bride and groom chose an 'unconventional' mode of transport, the wedding nonetheless was presided over by former Chief Justice Willy Mutunga.

My friends @helloayoo and @soko10 got married over the weekend. A beautiful wedding @Pawa254. CJ @wmutunga presided over the wedding. Pastor @frankondere gave a lovely sermonette. Wishing them a lifetime full of love, laughs, art and the best of times! pic.twitter.com/EX3gvLsN3I

Kenyans on Twitter congratulated the newly-wed couple on their nuptials but also had something to say about the mkokoteni stunt that they pulled.

"This is the real meaning of for better for worse... and it shows ones commitment to carry his responsibilities," wrote @Ddwaynestone1.

"Oyaaa... Respect to the couple Happiness is key," commented @Bikospeaks.

"For a moment I mistook the chariot for a mkokoteni," tweeted @lyndachalker.

In May this year another couple became the talk of town after details of their Sh23,500 wedding.

Mr and Mrs Odak further break down their budget saying that theirs was going to be a civil wedding at the registrar's office.

They planned to use taxi hailing app for transport to and from Sheria House at a cost of Sh800, eat cake worth Sh3,000 and buy rings worth Sh10,000.

A fee of Sh9,700 has already been paid to have their civil wedding conducted in the office of the Registrar of Marriages.

Mr Odak's break down elicited varied reactions from Kenyans online, with most users admiring the simplicity of his upcoming nuptials.