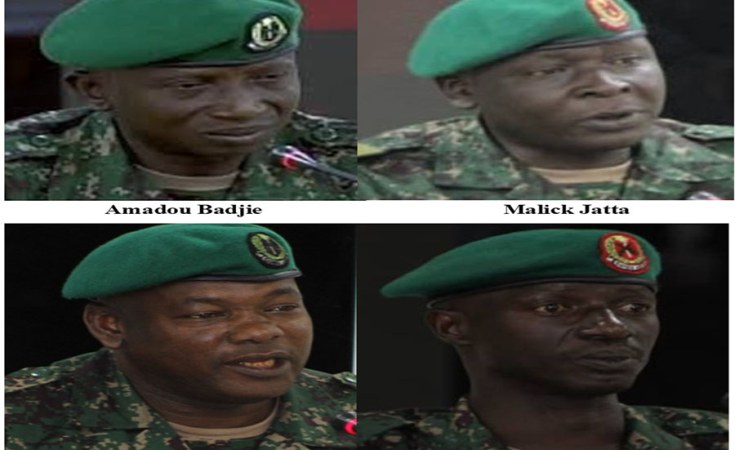 Faroyaa
Military personnel who were referred to as ‘Junglers’.
The Point (Banjul)
By Cherno Omar Bobb

Attorney General and Minister of Justice has told victims of human rights violation during former president Yahya Jammeh's regime that he has always put the plight of victims first in all the decisions he took during Gambia's current transitional justice.

Addressing the victims last Friday at the Victims Center during a meeting with members of The Gambia Center for Victims of Human Rights Violations, Abubacarr Tambedou said he was disappointed with those who say he is not interested in victims and their families.

He said he is one of the pioneers who advocated for the establishment of The Gambia Center for Victims of Human Rights Violations.

The meeting was called to discuss issues concerning Justice Ministry's recommendation for the release of some "Junglers" who testified at the country's truth-seeking commission, TRRC and explained their participation in some human rights violations including killings.

He said he accepts responsibility for taking the decision to recommend for the release of the Junglers, saying the decision was in the interest of victims and the nation.

Minister Tambedou said those who confessed to their participation in killings have helped their victims' families to finally know who killed their loved ones and who ordered them to commit the crimes. He said if perpetrators did not come forward and owned up to their act, victims would continue to speculate on what happened.

He said if they continue to detain witnesses that will discourage others from coming forward to testify before the TRRC and that would deny other families the opportunity to know the truth surrounding the death of their loved ones. "The TRRC is established for all victims. I do not want to leave anyone behind."

He told the victims that if they have arrested people like Alagie Kanyi, Sanna Sabally, Alagie Martin, other alleged junglers would not have come forward to testify, noting that witnesses' testimonies have helped the country a great deal to know what actually happened in the country.

He said the "junglers" have cleared suspicions on many issues as people were not present when they were committing the atrocities. "These junglers have been under detention for two and a half year with some of them coming out to speak the truth before the TRRC while others refuse to speak the truth. If we treat those who tell the truth and those who did not the same way, then those who want to say the truth will now refuse to do so."

Justice Minister Tambadou also clarified that the recommendation to release the "junglers" is not an amnesty, even though there are benefits for those who spoke the truth before the TRRC, adding that no matter what atrocities people commit they still have rights.

He said Gambians must not allow a repeat of what they fought against, saying that he does not want to over step boundaries by continuing to detain the "junglers" because they have rights.

He appealed to the victims to understand his ministry's decision, saying the TRRC is still ongoing and they cannot prosecute witnesses now.

Adama Jallow, National Coordinator of The Gambia Center for Victims of Human Rights Violations told justice minister that he should have consulted victims and other stakeholders for their response before releasing the "Jungers" on bail.

He pointed out that minister Tambedou has made several strides with regards to Gambia's traditional justice process but they did not agree with the state with regards to the release of the "Junglers".

Justice Minister Holds Dialogue With Victims On Release of "Junglers"

Gambia Rape Survivor Tells Truth Commission of Ordeal
Tagged:
Copyright © 2019 The Point. All rights reserved. Distributed by AllAfrica Global Media (allAfrica.com). To contact the copyright holder directly for corrections — or for permission to republish or make other authorized use of this material, click here.