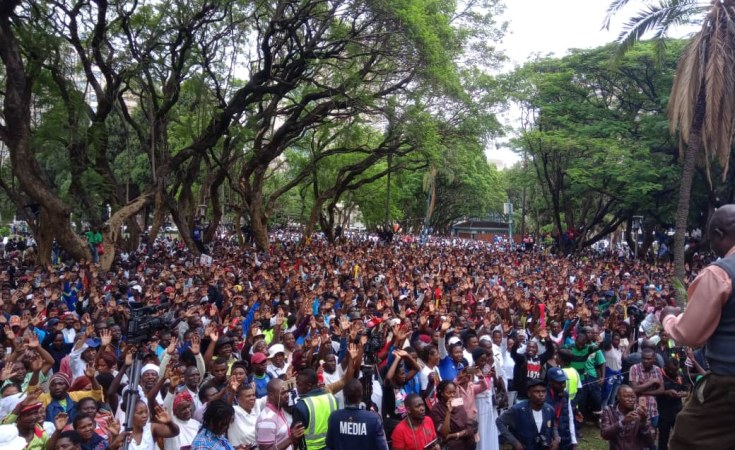 The Zimbabwe Republic Police (ZRP) has issued a prohibition order against demonstrations planned by MDC-Alliance today, saying anyone taking part in such action will face the full wrath of the law.

A prohibition notice compels one to stop an activity immediately.

"The Zimbabwe Republic Police assures the nation that officers are on high alert following the intended demonstrations that have been called for by the MDC-Alliance and its partners. The police will be conducting patrols, surveillance, stop and searches to ensure law and order is maintained in all areas of the country. In this regard, security for all citizens is guaranteed to conduct their social and economic activities.

"Please be advised that, after due consideration and meetings held with the convener and his legal advisors, the regulatory authority has issued a prohibition notice against the holding of the demonstrations on 16 August 2019 in Harare Central Business District, in terms of Section 26 (9) of the Public Order and Security Act, Chapter 11:17.

"Anyone who therefore participates in the demonstrations will do so in contravention of Section 26 (11) of the Public Order and Security Act and the law will take its course," Asst Comm-Nyathi said in the statement.

Section 26 (9) reads: "After considering representations made in the course of a meeting held in terms of subsection (3), if any, the regulating authority may, if he or she on reasonable grounds is convinced that no amendment or condition contemplated in subsection (5) or (6) would prevent the occurrence of any of the circumstances contemplated in subsection (3), issue a prohibition notice, giving the reasons and grounds therefore to the convener."

Earlier during the day, police had issued a statement saying they had concrete evidence showing that MDC-Alliance had plans to roll out violent demonstrations today, considering the assortment of weapons it has been smuggling into town.

The police spokesperson said acts of lawlessness should be reported swiftly to the ZRP on Complaints Desk numbers 0242-703631, Harare Operations 0242-748836, Bulawayo Operations 029-995479 or any nearest police station.

He invited members of the public who witness or record any acts of lawlessness to share such information with the police.

Speaking to The Herald last night Asst Comm Nyathi said: "Children should go to school, public transport should operate, business should be open, teachers should go to their schools, all workers should feel free to report for duty. People should go about their day-to-day activities knowing that the Zimbabwe Republic Police is there to ensure that anyone who engages in any form of intimidation, violence, looting or destruction of property is accounted for."

Double Trouble For Mnangagwa As Doctors, Teachers Threaten Strike
Tagged:
Copyright © 2019 The Herald. All rights reserved. Distributed by AllAfrica Global Media (allAfrica.com). To contact the copyright holder directly for corrections — or for permission to republish or make other authorized use of this material, click here.