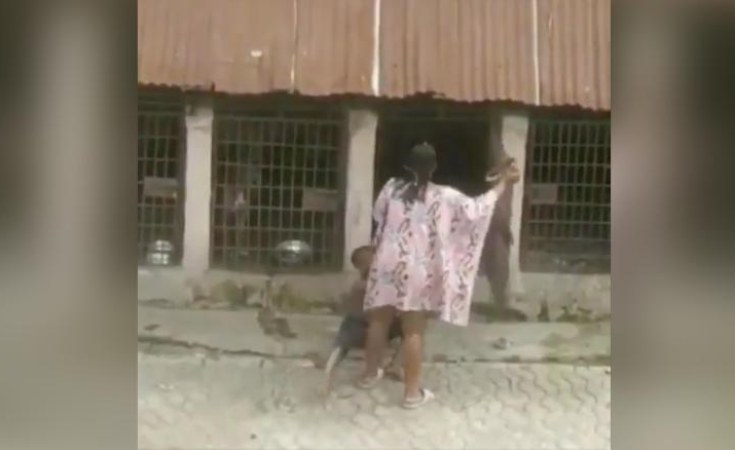 Photo: Screenshot/YouTube
This screenshot from a video circulated on social media shows a Nigerian woman who has been arrested after she was filmed beating and locking a boy in dog cage.
Vanguard (Lagos)
By Evelyn Usman

Detectives from the Gender Unit of Lagos State Police Command have arrested a 24-year-old woman who allegedly tortured a 10-year-old orphan in her care and locked him inside a dog kennel in Surulere area of Lago State.

Luckily, the defenceless boy was not bitten by the dogs.

Her arrest followed a video which went viral, where the boy, Chibuike Eziamaka, was seen struggling to avoid being forcefully pushed inside the dog kennel, where some dogs were kept.

He was, however, subdued by his boss, Oyinye Mbakwe, who threw him inside and locked him up.

Vanguard gathered that Eziamaka lost both parents seven years ago, while he was barely three years old, under undisclosed circumstances.

He and his two siblings were said to have been brought from their home town in Anambra State, to Mbakwe.

When the attention of the Commissioner of Police, Zubairu Muazu, was drawn to the video, he directed the Gender Unit to investigate the matter and bring the perpetrator to book.

Consequently, Mbakwe was traced to Chumpe Liquor Store in Surulere and arrested. During preliminary investigation, it was discovered that the lad was related to the suspect.

Confirming her arrest, spokesman for the Lagos State Police Command, DSP Elkana Bala, said: "Domestic and Sexual Response Team, DSVRT, Alausa-Ikeja, also added its voice to the call for investigation with a petition addressed to the Commissioner of Police to that effect.

"The Gender Unit traced the suspect to Chumpe Liquor Store, Surulere, and her residence at Aguda, where the 10-year-old boy was rescued and taken to a secured shelter. The suspect admitted that she is the one in the viral video, flogging the child with a belt."

However, during interrogation, the suspect told detectives that she did not lock the boy inside the cage.

According to her, "I did not lock him inside the cage with the dogs. I locked him in an empty dog kennel, where bags are kept. I locked him for few hours before bringing him out."

Asked why she did so, Bala said: "She alleged that the boy took alcohol from their refrigerator and was misbehaving, and that the suspect smashed the side mirror of her car with a stone, which made her to detain him in the dog kennel.

"The suspect's mother is the elder sister of the boy's father. The suspect will be charged to court. The Command reiterated its commitment towards protecting the rights of children and other vulnerable members of the society from all forms of violence and abuses." 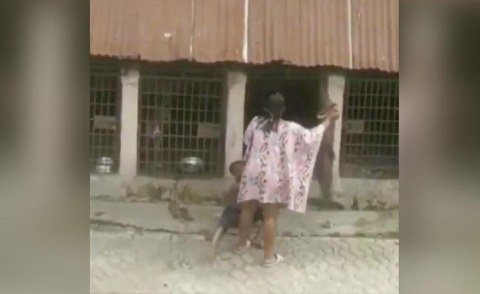 Woman Who Locked Child in Dog Cage Arrested
Tagged:
Copyright © 2019 Vanguard. All rights reserved. Distributed by AllAfrica Global Media (allAfrica.com). To contact the copyright holder directly for corrections — or for permission to republish or make other authorized use of this material, click here.