Sudan: While Peace Deal is Signed, Feminists Fight for Representation 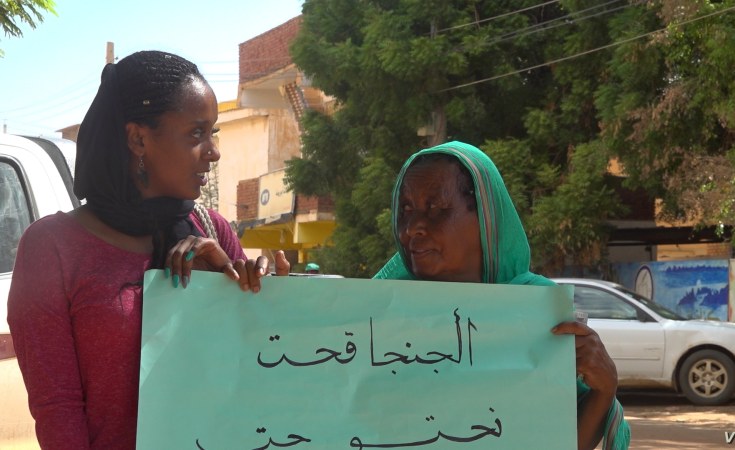 In Sudan, women are well-represented in the workforce. They are not lacking in any public spaces. And over the past few months, they have made up half, if not more, of the protest crowds making demands of their new transitional government.

Women were an integral part of protests that led to the ouster of longtime president Omar al-Bashir, as well as in demonstrations after his fall. However, many female leaders now say they feel they have been locked out of political agreements and do not expect to be named to any positions in the Regional Council.

Many feminists have been pushing to negotiate a 50% quota for women in government. Others have argued that 40% would be a more reasonable demand, as the current rate is 30%. But even the 40% has not been met.

“Our ambition was to have 50% representation in the government, or at least 40%, but this didn’t happen,” Haifa’a Farouq, a feminist and representative of the Sudanese Professional Association (SPA), told VOA.

Farouq is in a unique position; though she works with and for the SPA, she has also taken part in many protests organized by women outside SPA headquarters.

“Women who have taken to the streets since December have done so so the issues important to them would be priorities during the transitional period,” she said. But she, like many others, remain disappointed.

The SPA has been a driving force in negotiations for the transitional government, but many are unhappy with compromises that have made with the Transitional Military Council (TMC).

Men and leaders in the SPA welcome criticism. When protests are held outside their headquarters, one of the leaders will often talk to them and take note of their demands.

“Women should also fight individually for their right to representation. We will support them,” Rasheed Saeed, a spokesman for SPA, told VOA.

“The revolution hasn’t completely fulfilled its demands,” Saeed added, about compromises made during the transition.

Though women are represented in the SPA, many will note that the leaders of the group are still men.

Men in jail during revolution

In the months before longtime President Omar al Bashir stepped down, SPA leaders, mostly male, were jailed for months. During that time, women led the revolution and organized protests on the streets.

But they say when the men were released in April, they resumed their leadership roles with little acknowledgment of what women had accomplished in their absence.

“When they were released, for reasons I cannot understand, we were surprised the men were put back in leadership positions. I think it is because of the dominance of the patriarchal system that gave the men this feeling of privilege,” Niemat Koko, a former politician and feminist researcher, told VOA.

Koto noted that the heavy presence of women in protests was largely fueled by the patriarchal system. In 1989, a public order was established that mostly affected women’s abilities to express themselves, including mandatory dress codes and head coverings.

“What Sudanese women have suffered for 30 years — politically, socially and economically — they have only suffered it since independence,” Koko said. “And it’s caused by the dominance of religious culture, the practice of the totalitarian ideology and the absence of freedoms.”

Women have not been completely locked out of the government. At least one woman is expected to be named to the Sovereign Council, and many others to the legislative body.

But feminists who have taken to the streets partly because of the public order say they don’t feel the women currently poised to take office will address their concerns.

“There is an absence of real representation for women,” Nahid Bustami, a protester, told VOA.

“For me as a feminist, I am not seeing feminists who can represent me in the government. There are women, but they don’t represent women’s issues.”

Sudan’s TMC and opposition will formally sign their political agreement Saturday and will name members of the Sovereign Council on Sunday.

But many women who have led what they call their country’s revolution are unwilling to remain silent, as long as they still feel underrepresented.

Sudan Appoints Top Economist As PM
Tagged:
Copyright © 2019 Voice of America. All rights reserved. Distributed by AllAfrica Global Media (allAfrica.com). To contact the copyright holder directly for corrections — or for permission to republish or make other authorized use of this material, click here.