South Africa: Another Year, Another Marikana Commemoration - but Betrayal, Neglect and Injustice Are Still There 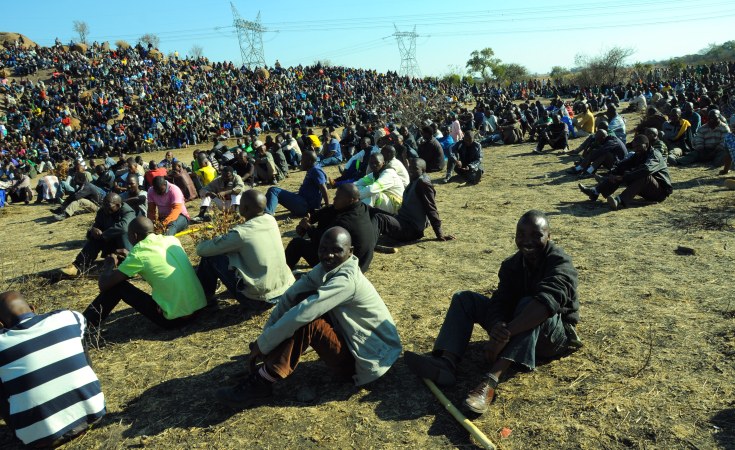 Booysen Thamaga/SAPA
Striking Lonmin miners gather on a hill near the Marikana mine before the shooting in 2012 (file photo).
Daily Maverick (Johannesburg)
analysis By Greg Nicolson, Chanel Retief and Yanga Sibembe

'They say in this country we're free, but only some are free, others are not. A policeman has the power to kill and it's not a big deal. Justice is not a real thing. I have not seen it'.

Since 2012, there have been a handful of actions taken to achieve accountability and improve the livelihoods of mineworkers and the Marikana community. They have largely come in spite of, and not because of, efforts from government, the platinum company and SAPS.

Zameka Nongu on Wednesday stirred pap on the stove in between washing dishes in her two-bedroom apartment in Karee Hostel, Marikana. An Amcu calendar was pinned to the wall.

It was Nongu's day off from her job cleaning the K3 shaft at Lonmin, the platinum giant recently taken over by Sibanye-Stillwater, the same shaft where her husband Jackson Lehupa worked before he was shot by police 11 times -- in his back, shoulder, thighs, buttock, groin and feet -- on 16 August 2012.

Life has changed for Nongu in the seven years since the Marikana massacre. Her children lost their father and she had to move from Mount Fletcher, Eastern Cape, to the platinum belt to take up a...

Previous Story
For the Platinum Industry, Marikana Was a 'Mechanisation Moment'
Next Story
SA Still Waiting for Action On Farlam Commission Findings

For the Platinum Industry, Marikana Was a 'Mechanisation Moment'