Liberia: Why District #15 Rerun Was Ordered 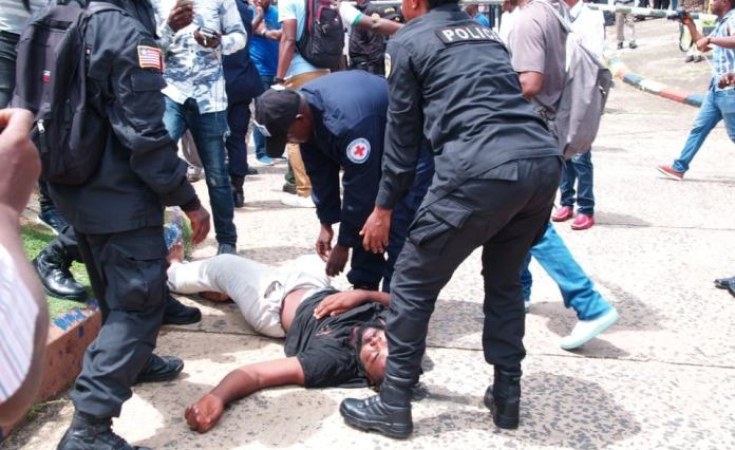 The hall was full of zealous supporters of the both sides, meaning the Telia Urey camp and the joint legal team from the National Elections Commission (NEC) and the ruling Coalition for Democratic Change (CDC), when the chief election dispute hearing officer, Cllr. Muana S. Ville gave the reason why there should be a rerun at the quarantined polling centers in Montserrado Electoral District #15.

In his delivery of the verdict, Cllr. Ville said the chief reason for calling a rerun of election in all the quarantined polling places is because the director of the NEC data center director, Floyd Sayor compromised the integrity of the District #15 polls by failing to obey instructions from his immediate boss, to quarantine ballots from the polling places where irregularities were said to have occurred and withhold the inclusion of votes from those areas from the final tally, until all such complaints had been addressed.

Cllr. Ville continued, "The hearing officers, having asked witness Floyd Sayor to state the date he began the counting upon the close of the voting centers, he did not. Additionally, the hearing officers were informed by witness Sayor that he disobeyed the order of his immediate boss, Emma Togba, when he was told to quarantine the polling centers said to have had some problems as claimed by Telia Urey and her campaign team," Cllr. Ville said.

He added, "Knowing that Emma Togba is the most senior officer at the NEC and that witness Floyd Sayor had no reason to have heard from the Board of Commissioners (BOC) first before taking an immediate action in order to contain any future problem for the electoral process, he was wrong and, for this reason, we hereby order a rerun for the six precinct centers from which the 20 polling places were created", he declared.

It may be recalled that Telia Urey, daughter of business man turned politician Benoni Urey, had requested a rerun of the Representative by-election in District #15, although it remains unclear whether, in view of yesterday's ruling, she is prepared to accept election rerun only in the polling places where alleged irregularities and fraud were said to have occurred.

However, lawyers representing both sides of the divide took exception to the ruling, an unprecedented move which indicates that the NEC Board of Commissioners will now become seized of the matter. Accordingly, lawyers will have a period of twenty-four(24) hours within which to file their exceptions to the Board of Commissioners which will either affirm or overturn the decision of the NEC Hearing Officer. In such instance the matter will then be referred to the Supreme Court for final determination.

But Ms. Urey, expressing displeasure at the outcome of the hearing, declared: "From the results in this hearing one can tell that the hearing officers do not belong to integrity institutions. They are biased, inconsistent and completely unfair," she said.

She told journalists after the hearing, that she has no confidence in the hearing officer's ruling but her team will do all they can do to continue to engage the NEC constructively until the right thing is done.

"This whole thing is not about Telia. It is about the tens of thousands of people in District #15 who sacrificed all their time and resources in order to usher in change. They are my concern, not my personal interest," she declared. Ms. Urey added that it is difficult to build trust and confidence in the electoral system of the country because the NEC continues to prove to the public that it is its own problem and consequently the cause of trouble in the country.

"Can you imagine that, at the first count my closest rival, Abu Kamara, got more votes than me but when the second count was done I got more votes than him in a more questionable way? His number dropped instead of the percentage while both my number and percentage increased," she said. She continued that owing to the fact that twenty centers were quarantined, it could have been possible that the votes were already compromised, not in her favor but in her rival's interest.

About the violence outside the fence of the NEC headquarters on Tuesday, August 13, Ms. Urey said that it is the CDC supporters who are always provoking confrontation and even instigating fights that often lead to severe injuries. "As we are here, a number of women and men are at the hospital. They were injured from the stone throwing led by CDCians. This is wrong and we will not continue to sit and watch them harm us for nothing. We will begin defending ourselves. When you stone us the next time, we will retaliate," she said.

"They sit or stand and watch the CDCians kill us," Ms. Urey said, referring to the Liberia National Police who was at the scene but did not arrest anyone connected with the stone-throwing. "They do not intervene as they should. They don't care about us but those who called themselves CDCians. We all cannot be for CDC but that does not deny us the general constitutional right of equal protection under the law," she said. She further noted that she has written the international community informing them of the lawlessness and bias in the government's enforcement of law and order.

For his part, Montserrado County Electoral District #8 Representative, Moses Acarous Gray, said the ruling handed down by the NEC chief election dispute hearing officer has so many contradictions and, as such, the "CDC will not sit and watch the wrong thing happen in the name of compromise" for peace sake or whatever.

"We are not frightened but what is clear under the law is that we can take appeal when we feel that we are not satisfied with a ruling handed down by a judicial body other than the Supreme Court," Gray said.

"We acted mature by not bringing in complaints to stalling Mr. Abraham Darius Dillon, who is now Senator. But here we are, they don't want to accept that they are wrong. The same FRR produced for you the Senator, why complain about it today when you did not do so yesterday,?" he queried.

He alleged that the Telia Urey camp is not fair to itself because, what the Liberty Party (LP), the former ruling Unity Party (UP) and their collaborating political parties did in 2017 is what the Urey camp wants to do.

"In 2017, they knew that they had no ground and that they had lost the Presidential election but intentionally delayed the runoff by filing complaints at the same NEC and subsequently the Supreme Court. But we are not deterred. Whatever they do, we will continue to prove that we respect democracy and are not in the business of robbing anyone of his or her victory. All they should accept is the truth that they have lost this election," he said.

Rep. Gray boasted that CDC remains the most popular political institution in the country and that, no one should think that the Coalition's loss of the Senate seat in the recent by-election, to Abraham Darius Dillon, suggests that Dillon is more popular.

"Dillon has got a vacation job. We allowed him to have it so he can experience the heat of being a Lawmaker in this country. But after the eight months, we will send him back home in 2020," he boasted further. He argued that LP, UP, ALP and ANC are, by law, in error for always calling themselves collaborating political parties.

"It is just about reading the electoral law of the country. We have nothing in the law called collaborating political parties. There can be an alliance or a coalition but not a collaboration," he explained. Although it is speculated that Rep. Gray did not vote in the July 29 by-election owing to the loss of his voter ID card, he served as the campaign chairperson of the CDC for the both by-elections.

Previous Story
It Is Now High Time for Introspection, Mr. President!
Next Story

It Is Now High Time for Introspection, Mr. President!

Women Take to Liberia's Streets to Demand End to Violence
Tagged:
Copyright © 2019 Liberian Observer. All rights reserved. Distributed by AllAfrica Global Media (allAfrica.com). To contact the copyright holder directly for corrections — or for permission to republish or make other authorized use of this material, click here.