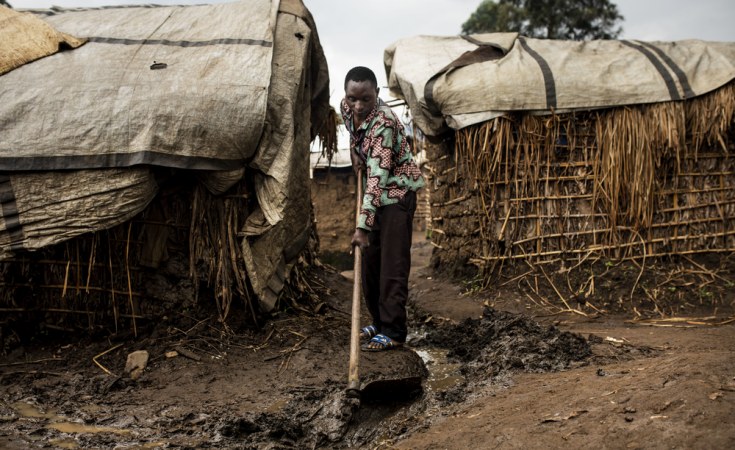 Pablo Garrigos/MSF
People living in the IDP camp of Bukombo, Masisi territory, try to fix their house in the first days of the raining season. The camp doesn't have enough latrines and fecal waters overflow across the camp.
Ghanaian Times (Accra)
analysis

As I write this piece, the Democratic Republic of Congo (DRC) is reeling from an Ebola crisis with the World Health Organization (WHO) having declared it a global health emergency. It is reported to have killed about 1,800 people so far. The crisis has been worsened by internal conflicts and mobility of people fleeing from the conflicts. I will continue with information gleaned from the BBC and Bloomberg on the Ebola crisis and deployment of vaccines.

The BBC says that a second vaccine be introduced to fight Ebola in Democratic Republic of Congo, currently in the grip of its worst outbreak. There is one vaccine developed by Merck and already used effectively during the crisis in West Africa, which claimed the lives of 11,000 people. There is a second vaccine by Johnson &Johnson, which is proven effective, but there are concerns that it is untested. Leading health experts say the second vaccine is safe and could be an important tool in holding back the spread of the virus.

The Director of the London School of Hygiene & Tropical Medicine and a leading expert on Ebola, Professor Peter Piot said the vaccine by Johnson & Johnson has been tested on 6,000 people and has shown outstanding safety. Studies have shown that although the drug is still in the experimental phase and has not been tested on patients with Ebola, it has proved highly effective in tests on primates (animals genetically close to humans).The only way to test it on humans is for it to be used in an outbreak scenario, as it would not be safe to trial the medicine on volunteers infected with the virus in a clinical trial.

This was how the first vaccine (by the Merck & Co) was successfully deployed in Guinea in 2015. The vaccine at the time was rolled out for compassionate use under the WHO. This allowed for the use of an unlicensed drug (licenses can take years or decades to get) when no other options were available, but only with authorization from the government of the affected country. The WHO data showed the Merck vaccine had a 97.5% efficacy rate for those who were immunized, compared to those who were not. At the time, it was reported that even though the vaccine had proven safe and effective against Ebola, more testing was required before it would be licensed. It appears the DRC situation is similar to the situation in West Africa four years ago. The second vaccine by Johnson & Johnson has evidence that it is safe and effective but yet to be tested in an outbreak and unlicensed.

The situation has become dire because of apparent shortage of the Merck vaccine. An expert from the Wellcome Trust believed the current Ebola outbreak was beyond the current stocks of the Merck vaccine and the need for the deployment of the second vaccine from Johnson & Johnson. Meanwhile Merck has indicated that it had enough vaccine to immunize nearly 500,000 individuals at the current dose, and is in the process of producing more.About 1.5 million doses of the vaccine wereavailable. Meanwhile there were around 10 million people in the two affected provinces. As a result, the current vaccine is only being given to health workers and people who might have been exposed to the virus.

More supplies of vaccines are required to roll out immunization across a wider area.Those pushing for the use of the new Johnson & Johnson vaccine, had proposed using it to create a protective wall, vaccinating people outside the outbreak zone.It is hoped this would prevent the virus from spreading.

There are concerns about the use of two vaccines. There was the risk of creating confusion and increasing mistrust among the affected communities. The fight against the current Ebola epidemic had been marked by community mistrust towards the response. The second vaccine (Johnson & Johnson) required two injections to be given 56 days apart. This could be difficult to administer in a region where the population is highly mobile, and insecurity is rife.

Information gleaned from Bloomberg said that Johnson & Johnson's experimental Ebola vaccine idling in a Dutch warehouse, in spite of raging Ebola crisis in Africa waiting for a decision of health authorities on its deployment to stem the crisis. It continued that the Ebola epidemic that began a year ago had already killed more than 1,700 people and had since been declared global public health emergency by the World Health Organization (WHO). Furthermore health experts had indicated that it had about 245,000 doses of an experimental vaccine from Merck & Co (already in use) and there was the need for additional options.

Bloomberg said health leaders in the DRC were reluctant to roll out Johnson & Johnson's (&J's) vaccine alongside Merck is because their differing regimens could lead to confusion in the conflict-ridden region of the outbreak. Both products are experimental and are yet to be licensed. Meanwhile, as the virus continues to spread, health experts and the humanitarian group Medecins Sans Frontieres (MSF) have said it was imperativeto extend vaccination coverage for the affected region. There was the need to use all available tools and approaches, including the coordinated use of both the Merck and Johnson & Johnson vaccines.

The Merck vaccine is made from a live, replicating virus and mounts protection against Ebola in about 10 days. The J&J immunization appears to raise the body's defenses for the long-term and it is administered in two shots about two months apart (56 days apart).

One strategy was to use the J&J vaccine on the periphery of the epidemic zone, where people remained at high risk due to population movement and re-seeding of cases. A second strategy was to give the vaccine in high-risk areas to those not identified as eligible according to recommendations made by a WHO expert pane. These strategies would require evaluation and adaptation according to the dynamics of the epidemic. Bloomberg ended by noting that while the WHO said there were 600,000 doses of the Merck vaccine available, logistical issues are creating bottlenecks in getting the vaccines to those in need. A source from J&J vaccine said the vaccine is tested regularly for stability, is in good condition, and will probably remain usable for another 5 or 10 years. If the current epidemic got under control quickly, their stocks will remain viable and ready for deployment in the next Ebola outbreak.

Congo Doctor's Frustration Sparks Groundbreaking Ebola Innovation
Tagged:
Copyright © 2019 Ghanaian Times. All rights reserved. Distributed by AllAfrica Global Media (allAfrica.com). To contact the copyright holder directly for corrections — or for permission to republish or make other authorized use of this material, click here.