South Africa: No Love for Ramaphosa After Marikana Massacre Tweet 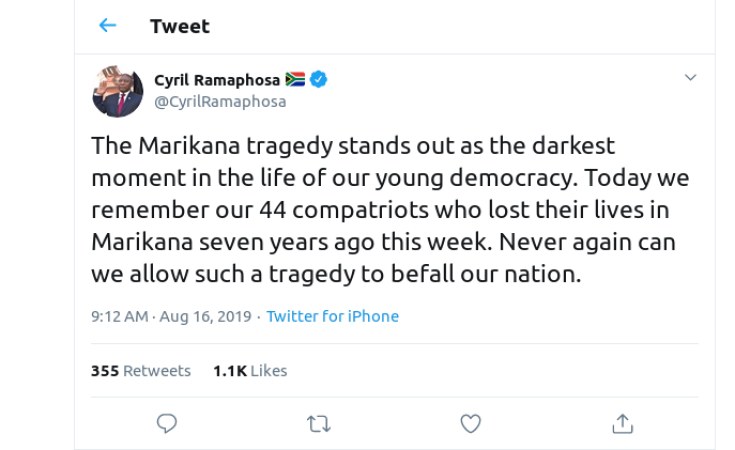 Cape Town — A tweet by Cyril Ramaphosa commemorating the seventh anniversary of the Marikana Massacre has elicited angry responses from users who slammed the President saying that he not only "ignored" the tragedy but was also responsible for it.

Ramaphosa's tweet read: The Marikana tragedy stands out as the darkest moment in the life of our young democracy. Today we remember our 44 compatriots who lost their lives in Marikana seven years ago this week. Never again can we allow such a tragedy to befall our nation.

@zeekabane:
How dare you make such a statement when you're the one who made the call?!!! You have blood on your hands and some of us will NEVER FORGET. Wow the nerve!!!!!!

@ramo_moeng:
Law of propaganda: Repeat a lie often enough, it becomes the truth. "Indeed, we have poor souls out there who have been made to believe that Cyril Ramaphosa ordered police to kill people in Marikana."

@Halla_Zikode:
How do you remember the 44 people that died on that day when you have done nothing for their families? Some of them still live in shacks, some were left paralyzed but not even once you have set your foot in that place to see how they are doing but you have nerves to write this.

@SicelMngomezulu:
I'm livid, why are you even saying anything about this MASSACRE which you instigated because of your greed and insatiable desire to please your White Masters, which you continue to do.You called for CONCOMITANT ACTION, that's what we remember.

@Mo_Amla:
You called for the concomitant actions against workers who were harmless and defendless yet come and twerk here? You are a dog for what you did. We will never forgive you. You have blood in your hands. Sies

@LebyaneKabelo:
So you ordered the massacre of these fallen heroes Mr President? You should've write that you will visit Marikana and their families, not that fake thing that was advised by people around you to make you look cool.

The 2012 Marikana Massacre saw 34 miners at Lonmin Platinum's Marikana operations shot dead during a protest. Families affected by the tragedy still await justice - not a single police officer has been prosecuted since the shooting and none of the recommendations made by the Farlam Commission of Inquiry have been implemented.

Hard Lessons From South African Mine Massacre Not Yet Learnt
Tagged:
Copyright © 2019 allAfrica.com. All rights reserved. Distributed by AllAfrica Global Media (allAfrica.com). To contact the copyright holder directly for corrections — or for permission to republish or make other authorized use of this material, click here.