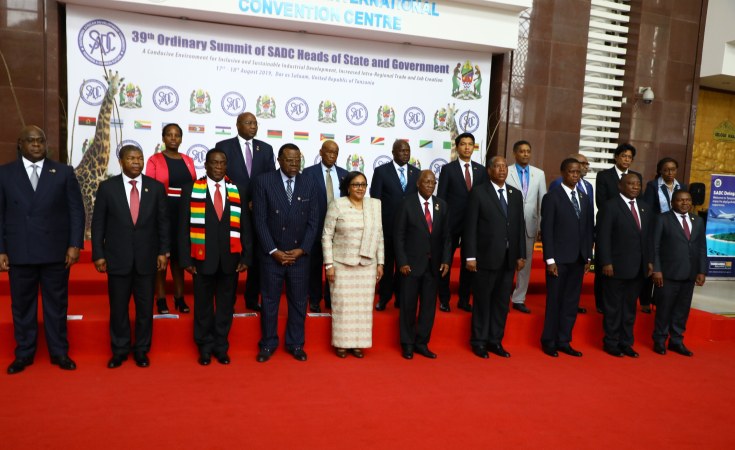 SADC/Twitter
SADC leaders at the the 39th SADC Summit in Tanzania.
The Herald (Harare)
By Darlington Musarurwa

Sadc countries have declared October 25 as solidarity day against illegal sanctions imposed on Zimbabwe and resolved to conduct various activities in their respective countries on that day to resoundingly call for the immediate removal of the sanctions.

The secretariat has also since been tasked to escalate the lobby with the current African Union chairperson, Egyptian President Abdel Fattah el-Sisi, who will be expected to raise the issue at the upcoming 74th United Nations General Assembly in September this year.

In a communiqué of the 39th Sadc Summit of the Heads of State and Government that was read out yesterday to mark the end of the indaba, Sadc Executive Secretary Dr Stergomena Lawrence Tax said the embargo was militating against economic growth in both Zimbabwe and the region.

"Summit noted the adverse impact on the economy of Zimbabwe and the region at large of prolonged economic sanctions imposed on Zimbabwe and expressed solidarity with Zimbabwe, and called for the immediate lifting of sanctions to facilitate socio-economic recovery in the country," said Dr Tax.

"Summit declared the 25 October as the date on which Sadc member states can collectively voice their disapproval of the sanctions through various activities and platforms until the sanctions are lifted."

President Mnangagwa told local media in an interview yesterday on the sidelines of the just-ended summit that the 16 member states, which were unanimous on the position that has been taken, would also engage the continental body to raise the issue with the United Nations.

"Well, as Zimbabwe, we were very pleased that this time around Sadc was unanimous on the issue of sanctions imposed on Zimbabwe. We resolved that we must pronounce ourselves as Sadc that sanctions on Zimbabwe should be lifted; that our secretariat should communicate that position of Sadc to the AU, so that the AU chairman, at the United Nations, can also pronounce the position of Sadc and the position of AU," said the President.

"We are happy that again it was emphatic that there was no cause or need for sanctions to continue; after all, the basis for the sanctions are not there anymore, and they were illegal at the time when they were imposed by a few Western countries, America and the EU. So, we are very happy with that."

The push to remove sanctions slapped on Harare by the United States of America and the European Union has been a consistently running theme throughout the duration of the summit.

The Sadc Council of Ministers put the issue on the agenda of regional leaders last week, arguing that the new political administration had made significant progress on both political and economic reforms.

The region, he said, continued to suffer from the contagion effect of the measures.

President Magufuli said: "As we are all aware, this brotherly and sisterly country has been on sanctions for a long time. These sanctions have not only affected the people of Zimbabwe and their Government but our entire region.

"It is like a human body: when you chop one of its parts, it affects the whole body. Therefore, I would like to seize this opportunity to urge the international community to lift up sanctions it imposed on Zimbabwe. This brotherly country, after all, has now opened a new chapter and it is ready to engage with the rest of the world. It is, therefore, I believe, in the interest of all parties concerned to see these sanctions removed. In this respect, I wish also to urge all Sadc member states to continue to speak with one voice on the issue of Zimbabwe."

Sadc countries were also commended for the humanitarian support they provided to countries such as Zimbabwe, Mozambique and Malawi that bore the brunt of recent weather-related disasters between January and April this year.

More than 1 000 people were killed and over 3,3 million people were affected and required immediate humanitarian assistance such as food, shelter, clothing, potable water, sanitation and medical support.

There has been a significant decline in grain production in countries such as South Africa, Malawi, Namibia, Zambia and Zimbabwe as a result of either poor rains or flooding in the 2018-2019 farming season.

Most notably, Sadc also adopted Kiswahili as the fourth Sadc official working language "in recognition of its contribution and Mwalimu Julius Kambarange Nyerere's role during the liberation struggle".

Meanwhile, President Mnangagwa returned home yesterday afternoon from the 39th SADC Summit in Tanzania where he assumed the chairmanship of Organ on Politics, Defence and Security Corporation.

President Magufuli Calls for Lift of Economic Sanctions Against Zimbabwe 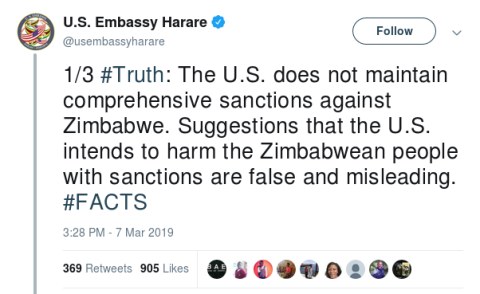 U.S., EU Sanctions Cost Zimbabwe Billions
Tagged:
Copyright © 2019 The Herald. All rights reserved. Distributed by AllAfrica Global Media (allAfrica.com). To contact the copyright holder directly for corrections — or for permission to republish or make other authorized use of this material, click here.