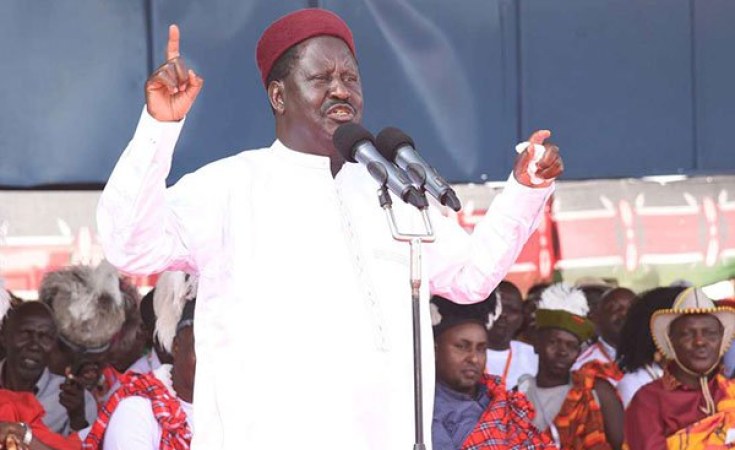 Opposition leader Raila Odinga on Saturday day gave the clearest indication yet that he will contest the presidency in the 2022 election, explaining that it was the reason he resolved to work with President Uhuru Kenyatta.

Speaking in Gem, Siaya County, at the burial of his aunt, Eva Donde, Mr Odinga also announced that the Orange Democratic Movement (ODM) was revamping itself in readiness for the 2022 General Election and asked party members to prepare for grassroots elections next year.

The late Mama Donde was the mother of former Gem MP Joe Donde.

Mr Odinga sought to explain his handshake with President Kenyatta, saying it was intended to take Kenyans to the "promised land".

He said he realised it was time to change strategy as he waits for the opportune time to ascend to power. "You have seen me change tack. This is a strategy. There are several ways that can lead us to where our ambition is," he added.

Mr Odinga told his supporters that he is still optimistic they would get what they have struggled for over the years.

"We will eventually get to Canaan -- the land of plenty where our youth will get jobs, schools, health facilities, water, electricity and roads will not be a problem. That is where we seek to take the country," he added.

Mr Odinga has kept Kenyans guessing about his future political ambitions, with his critics asking him to retire from active politics.

Whenever he has been urged to go for the top seat come 2022, Mr Odinga has downplayed the matter, instead stating that his priority and that of President Kenyatta was to unite Kenyans.

In what was deemed as his final shot at the presidency during the last General Election, Mr Odinga went out of his way to rally other presidential hopefuls -- Kalonzo Musyoka, Musalia Mudavadi and Moses Wetangula -- behind his bid under the National Super Alliance (Nasa), but fell short at the ballot.

He moved to the Supreme Court to challenge the results, terming them "computer generated".

He was vindicated by the ruling that the polls were not conducted in accordance with the law.

The Supreme Court in a 4-2 vote in favour of the petitioners ordered a repeat election within 60 days, but which Mr Odinga boycotted, saying the playing field was tilted in favour of President Kenyatta, the Jubilee candidate.

The repeat election went on and President Kenyatta was declared the winner. A dissatisfied Mr Odinga then "swore" himself in at a hurriedly convened event at Uhuru Park, Nairobi, in January last year, sparking a serious confrontation with the government.

It therefore came as a surprise to many when on March 9 last year, Mr Odinga's handlers sent out messages to the media inviting them to a briefing by the opposition chief and President Kenyatta at Harambee House, an event which gave birth to the "handshake".

If his latest pronouncement means he is going to contest the top seat one more time, Mr Odinga becomes Deputy President William Ruto's most formidable opponent, given the massive support he enjoys in various regions especially Nyanza, Western, Coast, lower Eastern and Nairobi.

Whether he will be able to rally other presidential hopefuls, including Mr Musyoka, Mr Mudavadi, Mr Wetangula and governors Alfred Mutua (Machakos), Ali Hassan Joho (Mombasa) and Wycliffe Oparanya (Kakamega), to his side remains to be seen.

It also remains to be seen who between Mr Odinga and Mr Ruto President Kenyatta is likely to back come 2022.

Announcing the party polls, Mr Odinga said: "I want to ask all the current party officials to know that all the positions will be declared vacant, and we invite those who wish to be elected as new officials to prepare as we conduct the exercise next year," he said.

He also reminded supporters of the party to remain steadfast and unwavering in their support for ODM.

"I want you to know that we have only one party that belongs to us and the party is ODM. I ask you to continue supporting it," he said.

On Saturday, Siaya Senator James Orengo assured the opposition leader that the party is fully behind him. "We are with you fully and in every step you take, you can be assured of our support," he said.

Speaking in Dholuo, Mr Odinga said he wasn't going to abandon the pursuit of the dream established by Kenya's founding fathers, which included the fight against illiteracy, poverty and poor health.

"That is the reason why I decided to work with my brother President Uhuru Kenyatta to ensure we fix the problems facing the country, such us politics of exclusion, negative ethnicity, electoral injustices and corruption," he said.

He asked Kenyans to support the Building Bridges Initiative (BBI), which he claimed was the only credible process that has fully engaged the country through a consultative method that saw Kenyans in the 47 counties give views on how the country should be governed.

Mr Odinga claimed that the Punguza Mizigo drive was sponsored by those who are against the BBI initiative to scuttle it.

"I have asked several Kenyans whose signatures are purported to have been collected by the Punguza Mizigo team but they are saying they never met them," he claimed.

He said the BBI team will soon hand over their report to President Kenyatta and himself.

"We will take back to the people all the recommendations made by the team and Kenyans will have the final say through a referendum," he said.

Mr Odinga, while rubbishing the contents of Punguza Mizigo petition, reminded Kenyans that the BBI committee went around the country and collected views from people in all the 47 counties.

Mr Odinga said the recommendations by the BBI team will arise from proposals made by the public during public hearings, unlike the Punguza Mizigo Bill, which he described as a one-man show that did not seek views from Kenyans.

The ODM chief said the recommendations made by the BBI committee will help solve myriad challenges facing the country. He said Punguza Mizigo Bill, 2019, did not go through public participation.

"We want to eradicate tribalism and refuse to classify each other based on our tribal names. We want to restore sanity in our electoral system and ensure justice is upheld. We seek to fight corruption and plunder of public resources."

But ANC leader Musalia Mudavadi, who addressed the same gathering after Mr Odinga had left, warned against frequent changes to the Constitution.

Mr Mudavadi said it was ridiculous for the country to keep subjecting the Constitution to amendments.

He was however quick to say that should there be a referendum, it should not be intended to benefit politicians.

"We had a Constitution from Lancaster. It was mutilated. We came up with the Constitution 2010 but already there are initiatives to change it.

"If we must have a referendum, let us ensure we consider the views of the people. The biggest problem we are facing is corruption, unemployment and poverty."

He added: "Let us not be seen to be changing the law to benefit politicians. Let us put strength on accountability, transparency and devolution."

Presidential Hopefuls Go All Out As Race Intensifies

Kenyan President Urges U.S. to See 'Big Opportunity' in Africa
Tagged:
Copyright © 2019 The Nation. All rights reserved. Distributed by AllAfrica Global Media (allAfrica.com). To contact the copyright holder directly for corrections — or for permission to republish or make other authorized use of this material, click here.