The Judiciary has said presidential election nullification petition case will not end in 24 days as widely believed, saying the matter may prolong up to December this year before a determination is made.

Registrar of High Court and Supreme Court of Appeal Agnes Patemba said there is no specific duration to hear the elections petition case.

Patemba who is Judiciary spokesperson said the constitutional court gives judges mandate to make their determination for a maximum of 45 days after conclusion of hearing the case.

"There are rules that govern elections, Considering that the case is now at the Constitutional Court, there are also rules that are followed," said Patemba.

Patemba said it will not be possible for the elections case to end in 24 days with large volume of court documents and battalion of witnesses.

She said the case has documents that can fill a three-tonner lorry and the Judiciary has a set a big room to keep the documents.

Judiciary spokesperson also said there are over 800 witnesses who are expected to testify in the case in which UTM Party president Saulos Chilima and a fellow presidential hopeful in the May 21 Tripartite Elections, Malawi Congress Party's (MCP), Lazarus Chakwera, petitioned the court to nullify the results, citing irregularities in the administration of the polls.

However, Patemba said not every witness whose sworn statement is with the court will be required to testify.

"The case could take up to December [or next year] and judges will make the determination in 45 days after the case is heard," said Patemba.

Judge Healey Potani, chair of the five-judge panel of Dingiswayo Madise, Redson Kapindu, Mike Tembo and Ivy Kamanga, sitting as the Constitutional Court in Lilongwe, on Friday provided directions that parties in the case should submit a checklist of facts that are undisputable so that cross-examination should be done only on disputable facts.

Potani said cross-examination of witnesses will now be done only upon a filing notice as this will serve two useful purposes, "one that witness will come prepared, second cross examination will be more focused."

He said the lawyers should file a notice to indicate name of witness and even paragraphs on which questions will be asked. All parties to file such notices by Wednesday 20/8/ 2019.

Meanwhile, on Monday, Justice Potani informed that the court will be finishing proceedings at 12 noon every Friday.

Renowned lawyer Raphael Kasambara also said the there are no specific allocated days for the case.

" The court simply blocked a number of days for the first session. After those days are exhausted, another set will be allocated," he said.

The MCP and UTM Party presidential candidates claim the presidential elections were rigged in favour of Mutharika who was declared winner with 38 percent of the votes trailed by Chakwera with 35 percent and Chilima with 20 percent.

Chilima Admits He Has No Evidence Mutharika Rigged 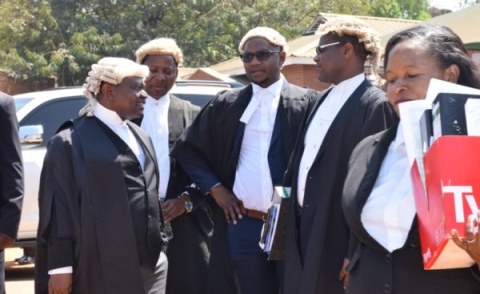 Rights Group Cancels 3-Day Protest After Malawi Court Order
Tagged:
Copyright © 2019 Nyasa Times. All rights reserved. Distributed by AllAfrica Global Media (allAfrica.com). To contact the copyright holder directly for corrections — or for permission to republish or make other authorized use of this material, click here.