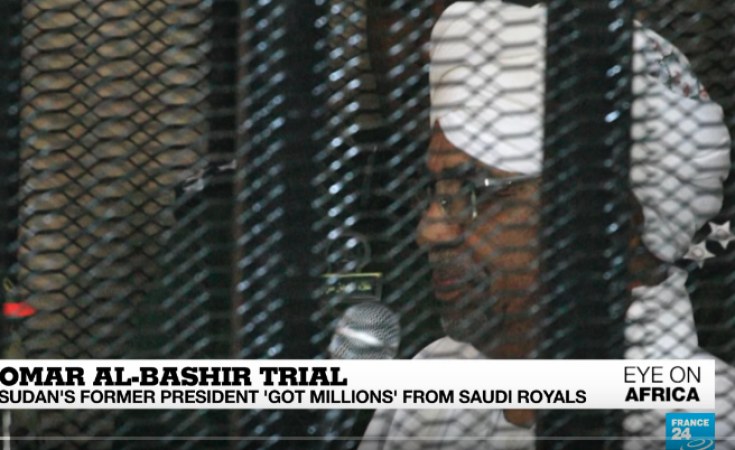 AFP reports that the former president, who was forced from power by months of protests in April, sat in a metal cage wearing a traditional white gown at the opening of his corruption trial.

His relatives chanted "Allahu Akbar" (God is greatest) as proceedings got under way. Bashir arrived in a huge military convoy.

Bashir is charged with illicit possession of foreign currency and accepting gifts in an unofficial manner, Reuters says.

Local news website Radio Dabanga says Bashir himself has not commented on the charges - but his team of defence lawyers has dismissed them as 'baseless'.

Reuters quotes the detective as saying that Bashir said MbS gave him the money for spending outside the Sudanese state budget and that it was spent on donations, without going into further details on who received it.

AFP reports that Bashir said he also received two previous payments of $35 million and $30 million from Saudi King Abdullah, who died in 2015.

Radio Dabanga reported in April that a substantial amount of cash was seized during a search of Bashir's residence in Khartoum.

Bashir has been indicted by the International Criminal Court in The Hague on charges of masterminding genocide in Sudan's Darfur region.

The Saudi government communications office did not immediately respond to a request from Reuters for comment on the testimony.

The next hearing is scheduled for Saturday.

Sudan's New Prime Minister, Sovereign Council Sworn In
Tagged:
Copyright © 2019 allAfrica.com. All rights reserved. Distributed by AllAfrica Global Media (allAfrica.com). To contact the copyright holder directly for corrections — or for permission to republish or make other authorized use of this material, click here.