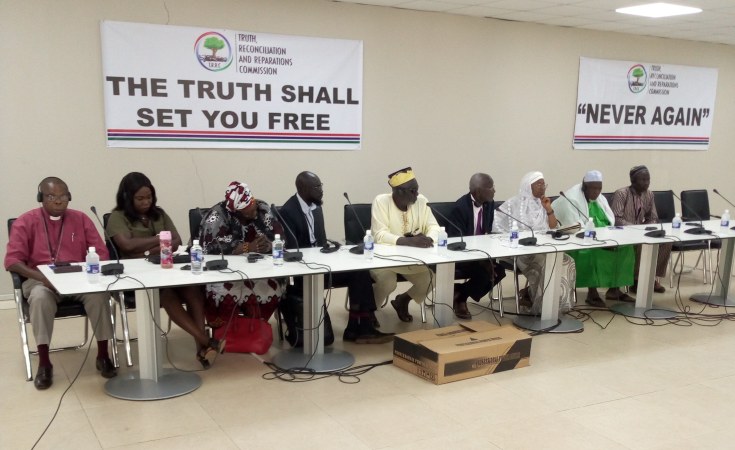 Binta Minteh told the Truth Commission that she was raped when she was 15 by a man who identified himself as a security agent in the year 2000 at the Independence Stadium.

Appearing before the TRRC on Tuesday as a victim, Manneh said she came to the Stadium to represent her school in an inter-schools' championship.

The 34 - year - old told the TRRC that in the year 2000 she was in grade 7 attending Brikamaba Upper Basic School. She told the Commission that she used to represent her School in competition including inter school's championship.

In narrating her ordeal, the witness said in April 2000, she represented her school at the inter schools championship at the Independence Stadium in Bakau. She said on that day, their school arrived at the Stadium around 6 pm.

"At around 8 pm, I went out to buy biscuits alone and when I was crossing the road, I was held by two men who identified themselves as security personnel. I went with them behind the Stadium with the two and there was no light and it was dark. The man who held my hand unzipped his trouser and one of them pushed me on the floor and then imposed himself on me forcefully," she said, adding that the other one ran.

She explained that the man after pushing her on the ground placed his elbow on her and tore her underwear.

"After this, my body pained me particularly my private part. When he released me, blood was flowing and I was crying. I used the same way they brought me with the intention of going home," she said.

She said she explained the matter to her teacher who took her to a police station who told her that the guards at the Stadium are paramilitary personnel. She added that her statement was taken and she was taken to Royal Victoria Hospital (as it then was).

"I did not know the police station because that was my first time coming to Kombo," she said.

She said at the hospital after carrying out check up, the doctor told her teacher that 'they have already destroyed her".

"What do you understand with what the doctor meant by "they have already destroyed her"? Counsel Horojah Bala Gaye asked.

"It means I have been 'dis virgin'," the witness said, adding that she was kept at the hospital for 7 days because blood was been discharged.

She said she couldn't participate in the inter-schools' championship.

"I returned to school but I quit schooling because of trauma. I quit because student talk about it whenever they see me," she said.

She explained that in her village, if such things happen to a girl the person lives in shame because people will always talk about it.

She said she was called in Banjul for questioning, adding that she came with her mother and her mother's younger sister for about four times.

"After I explained my story to them, they told me that my story was untrue," she said, adding that "the man used to shout at me with intention of confusing me."

She told the TRRC that the police never contacted her after making that complaint to them.

"When I am sitting alone, the shock comes back to me and I will feel bad. Now, my mind is steady because I have taken it to be a past event and I have left my village living around the urban center," the witness said.

Gambian Truth Commisssion Makes Far Reaching Recommendations
Tagged:
Copyright © 2019 FOROYAA Newspaper. All rights reserved. Distributed by AllAfrica Global Media (allAfrica.com). To contact the copyright holder directly for corrections — or for permission to republish or make other authorized use of this material, click here.