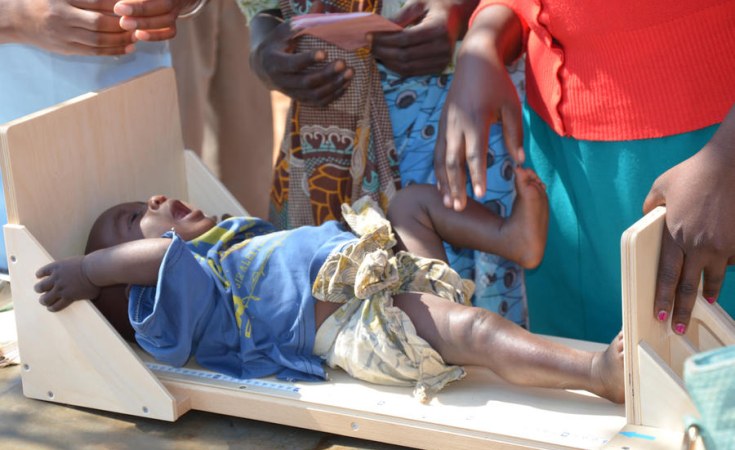 Alina Paul/SciDevNet
A baby being measured at a clinic (file photo).
allAfrica.com
interview By Sethi Ncube

Johannesburg — According to the World Health Organisation's Global Nutrition Targets 2025 report, the global prevalence of childhood stunting and the total number of stunted children less than 5 years of age are decreasing. Between 2000 and 2016, stunting prevalence declined from 32.7% to 22.9% and the number declined from 198.4 million to 154.8 million. The number of stunted children in Africa increased from 50.4 million to 59 million between 2000 and 2016.

allAfrica's Sethi Ncube spoke to Dr Adelheid Onyango, WHO Africa Regional Adviser for Nutrition, who was participating at the 69th Regional Committee meeting of the World Health Organization (WHO) for the African Region in Brazzaville.

What is the status of undernutrition, and what progress has been made since 2000, when the Millennium Development Goals targeted the problem?

The MDG target for undernutrition aimed to reduce underweight in children. That led to a focus on satisfying hunger without due attention to the quality of foods.

While there was success in reducing underweight, it became clear during the countdown to the 2015 that there was more at stake than low weight. A child can be underweight because of being stunted rather than being too thin for their height. When such a child is overfed, they remain stunted but become overweight.

We continue to face challenges with wasting because of food insecurity and humanitarian crises. At the same time, stunting is recognized as a problem that robs our economies of their potential for development and contributes to overweight and diet-related noncommunicable diseases. Therefore, it is important that integrated policies and actions are designed to address all forms of malnutrition and diet-related noncommunicable diseases.

Where are the new undernutrition problems emerging, and how should we deal with them?

Rather than new undernutrition problems, some old problems are reappearing. There was an outbreak of pellagra (resulting from deficiency of niacin, a B-vitamin) in Mozambique in June this year.  Previous outbreaks in Angola, Malawi, and Zimbabwe had been reported in the 80s and 90s. The risk of micronutrient deficiencies will always exist, particularly during epidemics.

We therefore need to make provisions within existing disease surveillance systems for early detection and timely response of such outbreaks. In addition, food rations used during humanitarian crises should be enriched with essential nutrients as a preventive measure.

Is obesity reaching the same levels of malnutrition on the continent?

Obesity is increasing in all age groups in Africa. Among children under-five the prevalence in Algeria and Southern Africa already exceeds 10%. In the rest of the Region, overall prevalence is still below 5% but the trend is increasing, and in 2018, it was estimated that 24% of overweight children lived in Africa.

Among adults, overweight is rapidly overtaking undernutrition: the prevalence increased from 28.4% in 2000 to 41.7% in 2016. It's important to note that obesity affects more women than men, and that it is thus transmitted to their babies from gestation.

But even with the increasing burden of overweight and obesity undernutrition persists in most countries, especially stunting and specific micronutrient deficiencies. This coexistence of the two forms of malnutrition – the so-called double burden – can be seen in the same individual, within the same family as well as at population level.

How much of the obesity issue is a nutrition problem and how much of it is cultural (for example, weight as a status marker or to make girls desirable as brides)?

At base obesity is a problem of unbalanced nutrition, resulting from lifestyle changes characterized by increasing consumption of unhealthy foods and reduced physical activity. Even where plumpness in women is idealized (for example some tribes NW Africa – Algeria, Mali, Senegal, Burkina Faso and Niger), this cultural image of beauty is achieved by overfeeding brides.

The steps in dealing with this issue are to raise population awareness of the negative consequences of excess weight (health, economics, quality of life); encourage active living; and put in place policies and mechanisms to promote the consumption of healthy foods.

There are lingering challenges to sustainable food systems and nutritious diets among poor people - what are you proposing that will make a difference?

Continuing urbanization means more and more households (including in rural areas) depend on the market for their basic food commodities. Commercialized and mechanized agriculture systems are favouring the production of cash crops, with consequent reduction in food crop varieties and small-scale animal production. Processed foods and ready-to-eat foods are replacing whole cereals, fresh fruits and vegetables, and other non-processed foods. Food sovereignty is a concern for many farmer households. Current production systems are not environmentally sustainable considering, for example, the extensive use of pesticides.

Sensitization about the environmental and health consequences of these modes of production is one area of action. But legislation to regulate the use of chemicals that threaten the safety of food and health of the environment is urgently needed in addition to policies to increase the availability and affordability of safe and healthy foods.

With climate change expanding the incidence of droughts, what is being done to help communities cope?

Indeed, the most recent food security report indicates that the number of hungry people in sub-Saharan Africa has been on the rise since 2010. With the support of the FAO and other agencies, there are many ongoing initiatives to improve biodiversity in agriculture through breeding and conservation of climate-resilient crops. Member States are encouraged to enact policies that improve farmers' access to information and innovations for better resilience in the face of climate change and other threats to their livelihoods.