Kenyatta Links War on Graft to Last Term in Office 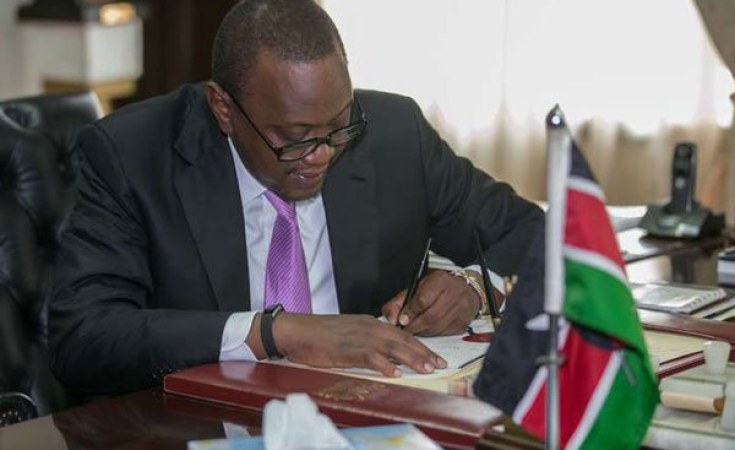 President Uhuru Kenyatta Saturday declared that the war on corruption is informed by the fact he will not be seeking votes from Kenyans after his current term.

The President said his loyalty is to the people of Kenya and not a few individuals.

He further vowed to ensure that those who had squandered money from public coffers would be dealt with in line with the law, saying the culprits will be forced to "vomit the money".

Speaking at Githambia Primary School in Gatanga Constituency, Murang'a County, during the funeral ceremony of the late Benga maestro, John Mwangi Nganga, alias John DeMathew, the President warned that he did not have friends in the war on corruption and that his only allies were the ordinary Kenyans.

The Head of State chose to speak in Kikuyu, perhaps to drive the point home on his resolve to fight corruption.

"Gutiri mundu ugucoka kuria indu cia mundu bure, mikora nie nguteng'erania nayo, nie ndiramera gutiri kura ndiraceria ... indo cia andu nimugucokia ... hau ndiri na murata, murata ni kirindi gia Kenya (The culture of unbridled corruption will end, I will continue pursuing the corrupt. I have been telling them that I am not seeking votes anymore, they have to return public money. I don't have a friend when it comes to fighting corruption. My friends are the people of Kenya," he said.

He urged political leaders to be careful when making public pronouncements as some remarks may burn the country.

"I seek to urge leaders to be very careful when making some remarks as they can cause trouble in our country and return to haunt them in future," he said.

The President also ordered the Directorate of Criminal Investigations and the Ethics and Anti-Corruption Commission to investigate the Music Copyright Society of Kenya officials over corruption claims. He said a report, which will be made public, would help determine whether there are officials who had been enriching themselves at the expense of musicians.

"The Music Copyright Society of Kenya can't purport to collect Sh230 million and then claim to have used 60 per cent in the exercise," said Mr Kenyatta.

The President also ordered for the relocation of the music copyright office from the Attorney General's office to the Information Communication and Technology docket.

He said the department is in better hands at the Ministry of ICT, which is able to track broadcasters and ensure that musicians earn what they deserve.

"The Attorney General's office can't help the artistes, they are lawyers, the ICT is better-placed to track the music in conjunction with the Communications Authority of Kenya," said the President.

He also directed the ICT ministry not to renew licences for broadcasters and telcos that fail to remit royalties.

Deputy President William Ruto, who also attended the ceremony, refuted claims that he is engaged in premature 2022 presidential campaigns, saying he is only helping President Kenyatta to deliver on his mandate to the electorate as they promised while they were seeking votes.

He said assisting the President to implement the Jubilee manifesto should not be misconstrued to mean that he was campaigning for the 2022 election.

Dr Ruto said he would continue supporting the President to transform the country by launching various development projects in line with his oath of office.

"People forget very easily, when the President was sworn in, I was there, and I also swore to support the President and to compliment him to deliver what was in our manifesto, I will continue doing that because if I don't, I'm the one to be asked questions," he said.

Reacting to former Kiambu Governor William Kabogo's remarks that he and ODM leader Raila Odinga should calm the country by shunning early campaigns, Dr Ruto said it was unfair for him to be compared "with people who have no elective mandate".

During the burial ceremony, Murang'a Woman Representative Sabina Chege refuted claims that she was a wife of the departed musician.

Ms Chege said she was not a lover of the late Benga maestro, neither did they have a child together. She said it was disheartening to be accused of flirting with the late musician when both had families. "Those who have been trending the fake news that we have been lovers and have a child with the late artiste have seen the first and the second wives of the deceased. They should know that the deceased has a family and I also have a family," said Ms Chege.

She said the allegations were politically-motivated to malign and undermine her.

The first wife of the deceased, Sarafina Wairimu, urged 'haters' to keep off her relationship with her co-wife Caroline Waithira.

Ms Wairimu added that some people were inciting them against each other but vowed they would not to fall for their schemes.

Meanwhile, three people died last night in an accident involving a saloon car and a pick-up after attending the musician's burial.

The car was heading to Thika town while the pick-up truck was heading in the opposite direction when the 7pm accident occured, according to the police.

Two occupants of the car and three passengers in the truck suffered serious injuries and were rushed to the Thika Level Four hospital for treatment while the bodies were ferried to the General Kago mortuary in Thika town.