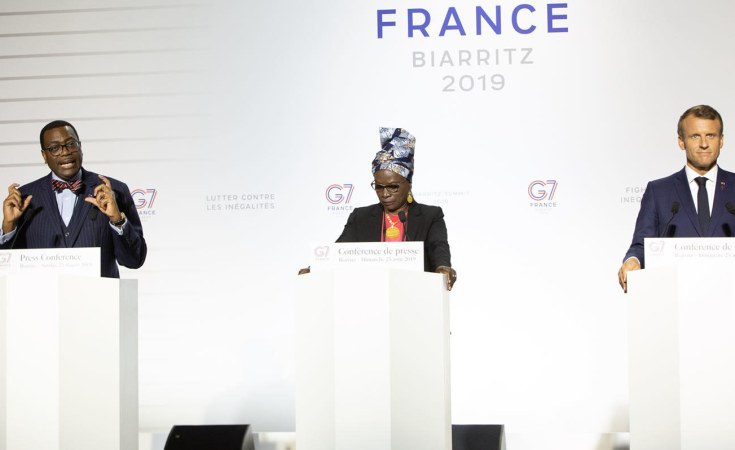 U.S. President Donald Trump is in Biarritz, France, for the G-7 summit, where he will be meeting world leaders who oppose his stances on many issues, including tariffs, Brexit, climate protection, China, Iran and Russia.

But in this meeting of the leaders of the world's major industrialized countries, there could be areas of cooperation where Trump is willing to offer support, or at least not resist: women's empowerment and Africa.

French President Emmanuel Macron, as the G-7 2019 president and summit host, has chosen combating inequality as the theme, with gender equality and partnership with Africa as key issues. He will be pushing several initiatives, including the Biarritz Partnership for Gender Equality and Partnership for the African Sahel. Macron also will be calling for renewed support for Affirmative Finance Action for Women in Africa.

Despite Trump's skepticism of foreign aid and his rejection of globalism, including his famous statement in front of the 2018 U.N. General Assembly that the U.S. "will not tell you how to live or work or worship," his administration has indicated it may support at least some of these initiatives, noting that the White House has launched similar efforts.

On Sunday Trump will participate in a G-7 working lunch on inequality and a session on the partnership with Africa later in the afternoon.

Macron is pushing countries to join the partnership and adopt the laws and public policies identified by the council.

He also will call for renewed support for African women's credit financing through the Affirmative Finance Action for Women in Africa initiative, a pan-African mechanism to reduce the cost of accessing credit and bridge the $42 billion financing gap being faced by women on the continent.

The White House has not announced whether it will sign on to any of the G-7 initiatives on gender equality. But a senior administration official told reporters that global women's empowerment is a "huge priority for this administration" and a message "we really want to drive home this weekend in France," citing the launch of the Women's Global Development and Prosperity (W-GDP) initiative and commitment as a founding member to We-Fi, a partnership hosted by the World Bank Group to finance women entrepreneurs.

W-GDP was launched by the White House in February 2019, and it is billed as "the first whole-of-government effort to advance global women's economic empowerment."

The president's daughter and adviser, Ivanka Trump, is leading the administration's efforts on global women's empowerment.

Africa is Europe's immediate neighbor, and instability on the southern side of the Mediterranean has an impact on the northern side, with the migrant crisis being the most visible example.

With that in mind, Germany and France are proposing a new partnership with Africa, including an initiative to enhance international commitment for the Sahel, a region facing multiple challenges ranging from the impact of climate change to the threat of terrorism.

Macron also has invited Senegal, Egypt, Burkina Faso, South Africa and Rwanda to join the G-7 countries in discussions about issues important to the continent.

The formal invitation of African partners to the G-7 "opens an opportunity to drive forward key items on the African agenda, where priorities should be placed, how they should be financed, what the necessary coalitions for success are," Yvonne Mburu told VOA. Mburu is founder and CEO of Nexakli, a global network of African health professionals and member of Macron's Presidential Council of Africa.

Mburu said the litmus test would be whether there will be measurable outcomes from the G-7 deliberations, and whether there is an accompanying mobilization of financial resources.

At the summit, G-7 leaders will be encouraged to join the Sahel Alliance, which seeks to economically develop the region and strengthen support for members' national security.

The U.S. government has already expressed doubts about financing a new U.N.-backed mission in the Sahel, but it might be open to the new format of cooperation that the French team wants to discuss, said Karoline Postel-Vinay, a research professor at the Paris-based institute Sciences Po. "However, as we now know, American foreign strategy seems predictably unpredictable," she added.

Despite not outwardly obstructing the G-7 agenda on Africa, it's unclear how much substantive support the administration would provide.

A White House statement ahead of the summit applauded the efforts of partners and the international community to promote peace and stability in Africa but did not mention whether the U.S. would provide additional economic or security assistance in the Sahel as called for by Macron.

The White House instead pointed to its Prosper Africa private-financing initiative and the BUILD Act as proof of the administration's commitment. The law was passed in 2018 and aims to facilitate private capital in developing low-income economies.

Analysts say the administration's policy on Africa is focused more on investment, in particular in the context of countering China.

While it hasn't abandoned any of the pillars of focus that previous administrations have had on the continent, the Trump administration is "doing less with less," said Judd Devermont, director of the Africa program at the Center for Strategic and International Studies.

"The administration is running the traps on some of the security stuff," said Devermont, "but without the same robustness of previous administrations and certainly not anywhere near where we were in democracy and governance."

He added that Trump does not have the personal connection that President Barack Obama had with the continent, nor the interest in development that President George W. Bush had.

On Thursday, Trump scrapped a proposal to freeze more than $4 billion in foreign aid after objections from lawmakers of both parties and his own Secretary of State Mike Pompeo.

While there may be some consensus on gender equality and Africa, there clearly are deep divisions between members.

For the first time in its history, this summit will not produce a joint communique amid deepening divisions between leaders over myriad issues.

G7 Summit - U.S.$618 Million Pledged to Fight Aids, TB, Malaria
Tagged:
Copyright © 2019 Voice of America. All rights reserved. Distributed by AllAfrica Global Media (allAfrica.com). To contact the copyright holder directly for corrections — or for permission to republish or make other authorized use of this material, click here.