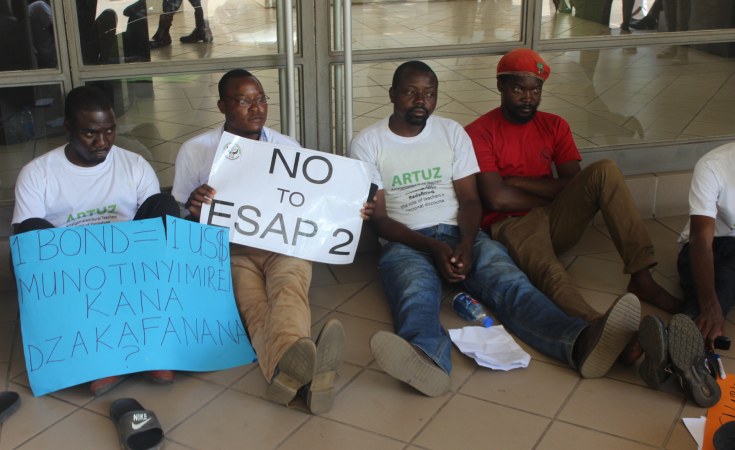 Members of the Amalgamated Rural Teachers' Union of Zimbabwe (ARTUZ) who were arrested on Friday were on Saturday granted bail by a Harare Magistrate after spending a night in police holding cells.

The unionists, who included human rights lawyer Douglas Coltart who says he was mistaken for a protester and beaten was among those who were granted $50 bail each with conditions attached.

ARTUZ organised the picketing in protests against poor salaries.

Government is in negotiations with the Apex Council the body that represents all civil servants and last week offered a 76% salary increase that would take the lowest paid government worker to just over $1000 a month far below what is being demanded.

Civil servants want the lowest paid worker to get the equivalence of US$475 monthly salary.

Police reportedly wanted the accused to pay $20 fine for criminal nuisance but Magistrate Nyasha Vhitorini ruled that the suspects will appear in court on October 1, 2019.

Police on Friday morning arrested nine ARTUZ members including its president Obert Masaraure as well as NewZimbabwe.com reporter Leopold Munhende who was later released without charge.

The teachers were dressed in black as they said were "mourning the deaths of their salaries" which they argue has been eroded by inflation.

The Apex Council in a statement Friday said it would consult its members on the offer by government. Reports however indicated government has adopted a take-it-or-leave it stance regarding the negotiations.

A meeting of the National Joint Negotiating Forum at which government representatives meet workers is likely to decide matters.

Teachers have threatened to withdraw labour before the opening of the third term which could jeophardise examination classes.

There have been media reports that government is mulling roping in the army as invigilators.

Mnangagwa Threatens to Deal With Striking Zimbabwe Doctors
Tagged:
Copyright © 2019 New Zimbabwe. All rights reserved. Distributed by AllAfrica Global Media (allAfrica.com). To contact the copyright holder directly for corrections — or for permission to republish or make other authorized use of this material, click here.