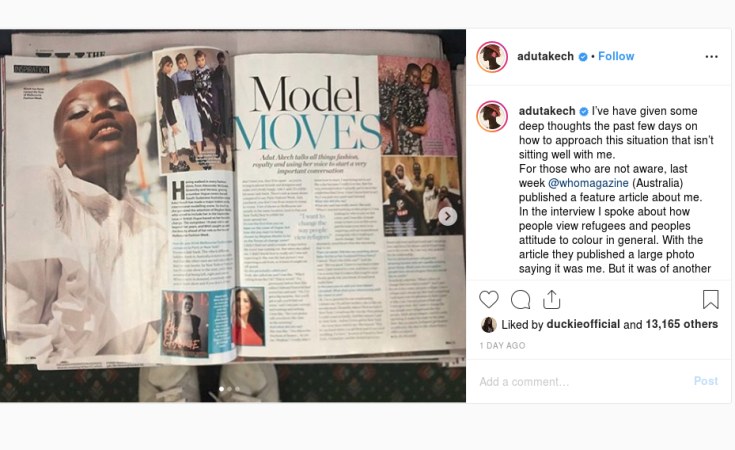 Cape Town — South Sudanese-Australian model Adut Akech is fuming after Australia's WHO Magazine used the photo of model Flavia Lazarus for an interview with Akech.

Akech said she felt "angry" and "disrespected" and says the incident shows the country has "got to do better" in its treatment of refugees.

Akech said in a statement on her Instagram account; "Not only do I personally feel insulted and disrespected but I feel like my entire race has been disrespected too and it is why I feel it is important that I address this issue. Whoever did this clearly thought that was me in that picture and that's not okay." "This would've not happened to a white model", she added.

WHO magazine says the error happened because they had been sent the wrong photo by a PR agency working for Melbourne Fashion Week. They have since apologised.

Melbourne Fashion Week has also published an apology saying; "We are extremely disappointed that a photo of one of our campaign models, Ugandan-Australian Flavia Lazarus, was mistakenly printed instead of a photo of Adut.

Akech featured in magazine where she spoke about using her voice to start a conversation about how people viewed refugees. Akech and her family fled South Sudan for Kenya, before eventually coming to Australia as refugees in 2008. Since then, she's walked runways for Saint Laurent, Valentino and Chanel and is now considered one of the world's most sought-after models.

Previous Story
Next Story
Lupita Flattered By Her Unlikely Lookalike

Lupita Flattered By Her Unlikely Lookalike 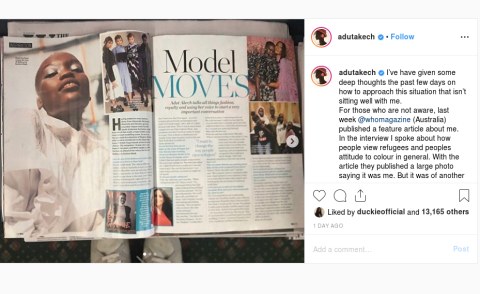 South Sudan Model Feels 'Disrespected' After Photo Blunder
Tagged:
Copyright © 2019 allAfrica.com. All rights reserved. Distributed by AllAfrica Global Media (allAfrica.com). To contact the copyright holder directly for corrections — or for permission to republish or make other authorized use of this material, click here.