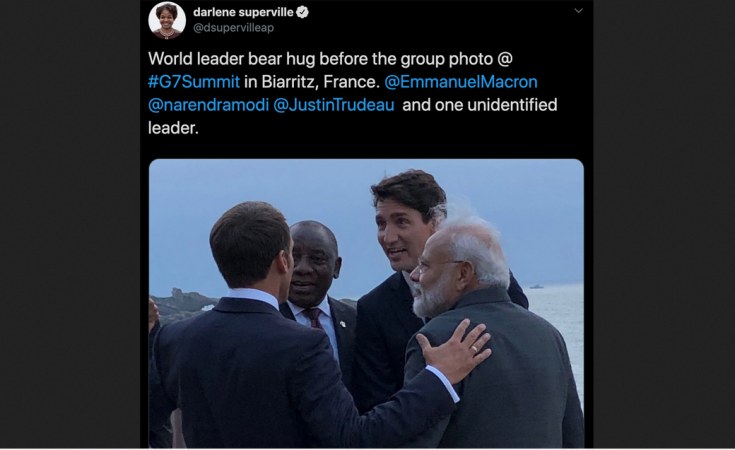 Darlene Superville, the White House reporter for the Associated Press in the US who enraged some South African tweeps for referring to President Cyril Ramaphosa as an "unidentified leader" in a tweet picturing heads of state, has responded to the backlash by composing a new tweet in which she tagged Ramaphosa.

In fact, she went as far as to tag the South African president in a picture in which nothing but his hand is visible, making sure she made up for her blunder on Monday.

Ramaphosa arrived at the summit on Sunday and aims to market South Africa as an investment destination and trade partner during the summit, Fin24 reported.

'Platform' "The working visit will also provide a platform for Ramaphosa and members of Cabinet to invite global partners to experience South Africa as an investment destination and trade partner and to participate in the country's efforts to secure faster, sustainable and inclusive economic growth and reduce unemployment," the Presidency said in a statement. But Ramaphosa seemingly failed to make an impression on Superville.On Monday, Superville again tweeted the picture, this time tagging Ramaphosa. In another tweet, which features Macron, Trudeau, Modi and German Chancellor Angela Merkel, she again tags Ramaphosa, even though he is completely obscured by Modi, with only his right hand visible. This, too, was a repeated tweet. In her previous tweet, she referred to Ramaphosa as "one leader hidden by Modi".It seems that Superville took note after she drew the ire of many South Africans who pointed out her ignorance in droves since her original tweet. Although she has not publicly responded or even taken down her original tweet, her updated tweets in which Ramaphosa is recognised seem to be some attempt by the AP reporter to rectify her previous blunder.

G7 Summit - U.S.$618 Million Pledged to Fight Aids, TB, Malaria
Tagged:
Copyright © 2019 News24Wire. All rights reserved. Distributed by AllAfrica Global Media (allAfrica.com). To contact the copyright holder directly for corrections — or for permission to republish or make other authorized use of this material, click here.