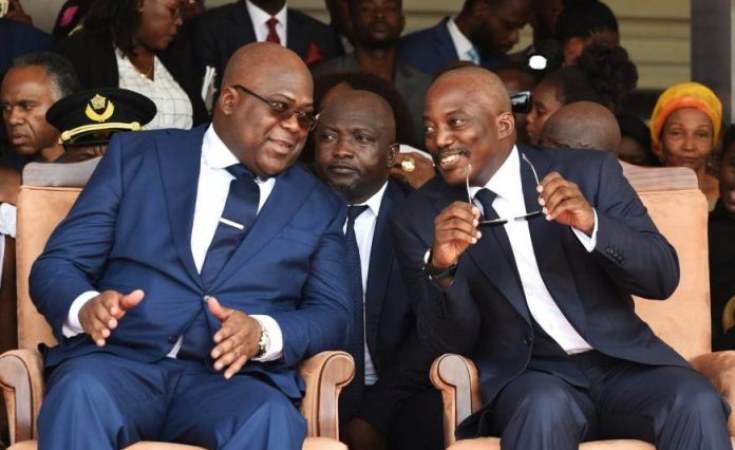 As the Democratic Republic of the Congo’s new president unveils his coalition government, opposition members are complaining about being left out.

On Monday, President Felix Tshisekedi announced his cabinet, seven months after winning a contested election that landed him in the country’s highest office. The 65-member cabinet includes 23 appointees from Tshisekedi’s Direction for Change Party and 42 from former President Joseph Kabila’s Common Front for Congo coalition. But members of the DRC’s numerous other political parties are warning that the cabinet gives too much power to allies of the former president and not enough to opposition voices.

Emery Kalwira, president of the opposition group Congolese Coalition, said that Tshisekedi’s predecessor, Kabila, maintains the majority of the seats in the government and doesn’t want to leave power.

“He is [Kabila] still the main leader of the DRC and Tshisekedi isn’t the real president,” he told VOA’s Daybreak Africa radio program. “That is why we want to call all the people to get up and to put them out and to begin a good transition with our popular salvation authority.”

In January, Tshisekedi took office, despite critics saying the election he won was rigged. Now opposition voices are accusing the new president of being a puppet.

“You know that Kabila is controlling the two parliamentary senate and the parliament and the biggest majority from the government composition is from him. That shows that ... Congolese people will still be suffering, and that’s why we say Mr. Kabila must go out. Because Tshisekedi is not the real president,” Kalwira added.

But Abraham Lukabwanga, president of the press to Tshisekedi, told VOA that the 76% of the cabinet are new to the government in an interview with Africa News Tonight. “Those are people that have never been into politics. They never had the position, so this can lead to a really big change,” he said.

Lukabwanga stressed that the cabinet is diverse and includes representatives of all 26 of DRC’s provinces, including women and young people who previously did not have a voice in government. He said they are determined to address pressing issues in the country, including corruption and an ongoing Ebola outbreak.

“What you’ve seen the last 48 hours since the government has been published is the joy of, the satisfaction of, I may say, the majority of people who are happy to say that now we do have a government. It’s time to work. We don’t have time to waste,” he said.

Is President Tshisekedi a Puppet of Former President Kabila?

Who is Democratic Republic of Congo's New Prime Minister?
Tagged:
Copyright © 2019 Voice of America. All rights reserved. Distributed by AllAfrica Global Media (allAfrica.com). To contact the copyright holder directly for corrections — or for permission to republish or make other authorized use of this material, click here.