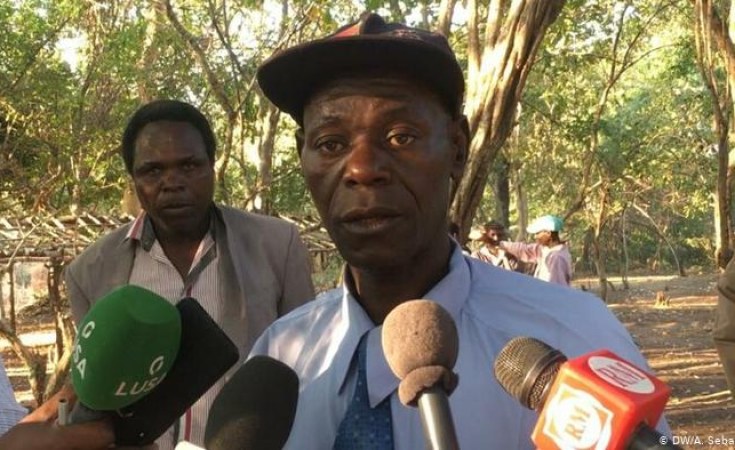 Mozambique's opposition RENAMO party recently signed a peace deal with the government. But the party's armed wing refused to lay down their weapons. It's leader Nhongo tells DW the peace deal is invalid.

It is a message that will shake Mozambique's politics. "We, the military junta of RENAMO, will prevent the elections scheduled for October until the government renegotiates the peace treaty with us. We do not acknowledge the recently signed peace treaty. An election will not take place. Anyone who makes calls for elections should know: We will kill him," said General Mariano Nhongo, chief of the armed wing of RENAMO, in a telephone interview with DW.

Nhongo says he is the legitimate leader of RENAMO (National Resistance of Mozambique), whose official party leader, Ossufo Momade, signed a peace treaty with the government on August 1. Nhongo told DW that Momade had no legitimacy to sign any agreements on behalf of RENAMO.

Who speaks on behalf of RENAMO?

At a party congress in January, Ossufo Momade was elected chairman to succeed the late ex-leader Afonso Dhlakama. In the DW interview, Nhongo made serious allegations against Momade, claiming he was a ploy for the ruling FRELIMO party and its President Filipe Nyusi.

General Nhongo claims he commands more than 500 armed men, dispersed at eleven different bases throughout the country. He will never accept the authority of Momade, he says on the telephone from his base in the remote Gorongosa Mountains in the province of Sofala.

"The government must not negotiate with Momade, but speak directly with us, the RENAMO military junta, otherwise there will be war," Nhongo said.

The problem for Nhongo's section is the August peace treaty signed between President Nyusi and Momade, which included a pompous ceremony with several international guests. In the agreement, both parties are required to refrain from hostilities or military actions. RENAMO committed itself to disarmament and demilitarization. In return, its rebel fighters are to be gradually integrated into the Mozambican police and the military structures.

At the signing ceremony, RENAMO chairman Momade announced this was achievable. "We are finally saying goodbye to violence and war," he said.

He said that the peace treaty was the foundation for lasting peace in Mozambique. Detlev Wolter, Germany's ambassador, who was also present at the ceremony, said it was a "historic day" that will finally bring Mozambique "peace and stability."

The long shadow of the Cold War

But a blink into the past urges for greater caution. RENAMO and FRELIMO signed peace deals in the past, but none of them held. The 1992 Rome treaty ended the bitter decades-long Cold War conflict, but in 2013, RENAMO resumed fighting blaming exclusion from FRELIMO. A temporary ceasefire agreement followed in 2014, which was extended indefinitely in 2017, but it did not entirely end the conflict.

After Mozambique's independence in 1975, the former rebel movement repeatedly clashed with the ruling FRELIMO in a bloody war.

The current peace treaty signed in August was intended to settle the conflict for good. But the agreement was built on sand. On the eve of the signing, two people were severely injured in an attack on a truck in Sofala province. Nhongo's "Junta Militar da RENAMO" was blamed for the attack. He, however, rejects any responsibility for the attack, in the DW interview.

RENAMO fighters were supposed to have vacated their military bases on August 21 and surrendered their weapons. But the rebels ignored the deadline.

Peace on the edge

"RENAMO is an officially registered political party and is represented by its chairman Ossufo Momade, who this year was elected by a sizeable majority at a legitimate congress," Manteigas said.

Manteigas thinks the current conflict can only be solved "within the RENAMO family". He admits the implementation of the peace agreement is a complex process, but failure to meet the deadlines would be disappointing. It is all the more important, he argues, that the government provides all the funds earmarked for the disarmament, demobilization and reintegration of RENAMO fighters.

But time is running out. Mozambique's presidential and parliamentary elections are due to be held on October 15. The election campaign is scheduled for the beginning of September. The internal squabble within RENAMO is causing insecurity and fear. Will elections take place?

There is growing skepticisms, especially among young Mozambicans below 25 years, who form about 65 percent of the population. In the capital, Maputo, teenagers protested on the weekend through urban street art against a resurgence of violence. One of the demonstrators told DW that he felt he had been taken as a hostage by the old parties.

In parliament, there is also growing resistance the two arch rivaling parties. The MP of the MDM (Democratic Movement of Mozambique), José Manuel de Sousa, cautioned in parliament that the elections could lead to violence: "The conditions for peaceful elections are currently not available."

RENAMO and FRELIMO would again prove their inability to create the conditions for true peace, de Sousa said.

Amós Zacarias in Maputo contributed to this report.

Cracks Form in Mozambique's Latest Push for Peace
Tagged:
Copyright © 2019 Deutsche Welle. All rights reserved. Distributed by AllAfrica Global Media (allAfrica.com). To contact the copyright holder directly for corrections — or for permission to republish or make other authorized use of this material, click here.