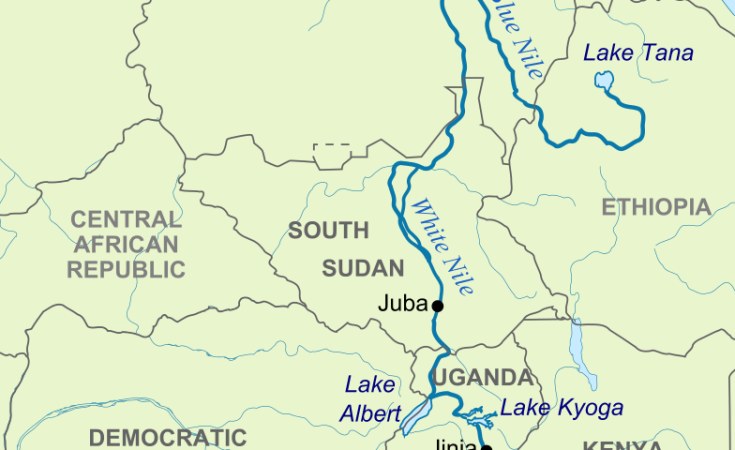 Wikimedia Commons
Map showing the White Nile and the Blue Nile before they join to form the Nile River.
Thomson Reuters Foundation (London)
By Laurie Goering

London — Rapid population growth, combined with a hike in hot and dry years, is likely to dramatically increase the number of people suffering water scarcity on the upper River Nile, climate change scientists said on Wednesday.

By 2030, demand for Nile water will exceed supply, and by 2080, almost two-thirds of people living in the upper Nile basin could face water shortages in particularly hot and dry years, researchers from U.S.-based Dartmouth University predicted.

That could affect close to 250 million in the upper basin by 2080, researchers said.

A shortfall looms despite overall rainfall to the region growing as a result of global warming, they said in a study published in the journal Earth's Future.

"The Nile basin is one of several fast-growing, predominately agricultural regions that is really on the brink of severe water scarcity," said the lead author, Ethan Coffel.

"Climate change, coupled with population growth, will make it much harder to provide food and water for everyone in these areas. These environmental stresses could easily contribute to migration and even conflict," he said.

The study looked at existing water access, and likely changes, in western Ethiopia, South Sudan and Uganda, countries along the upper reaches of the Nile River.

In that area, population is expected to nearly double by 2080, from a current 200 million, as sub-Saharan Africa overall sees the highest rates of population growth in the world.

At the same time, the frequency of hot and dry years is expected to grow as much as three-fold in the upper Nile basin, even if global warming is held to an agreed international goal of 2 degrees Celsius (3.6F), the study noted.

Global emissions are currently on a path to push the world's average temperature 3 or more degrees Celsius above pre-industrial levels, elevating the risk, scientists say.

The Dartmouth study said that as population rises in the upper Nile basin, a region already on the brink of water scarcity would likely tip into it within the next decade or two.

He said one of the biggest surprises from the research was "the magnitude of the water scarcity challenge" in the region.

That is particularly worrisome given poor yields of its major crops - such as maize, millet, barley and wheat - already coincide almost precisely with hot and dry years, he said.

Crop yields have risen dramatically in the past two decades, but ever more climate extremes put that at risk, Coffel said.

Worsening water scarcity is also likely to boost tensions over controversial projects such as Ethiopia's hydropower dam - Africa's biggest - under construction on a branch of the Nile, he said.

Nor is the threat contained locally, the scientist said.

"There are lots of regions facing similar problems due to greater water scarcity and population growth," he said.

Why Ethiopia Is in the Eyes of Most for Investment

Russia to Mediate Ethiopia, Egypt Dam Debacle
Tagged:
Copyright © 2019 Thomson Reuters Foundation. All rights reserved. Distributed by AllAfrica Global Media (allAfrica.com). To contact the copyright holder directly for corrections — or for permission to republish or make other authorized use of this material, click here.