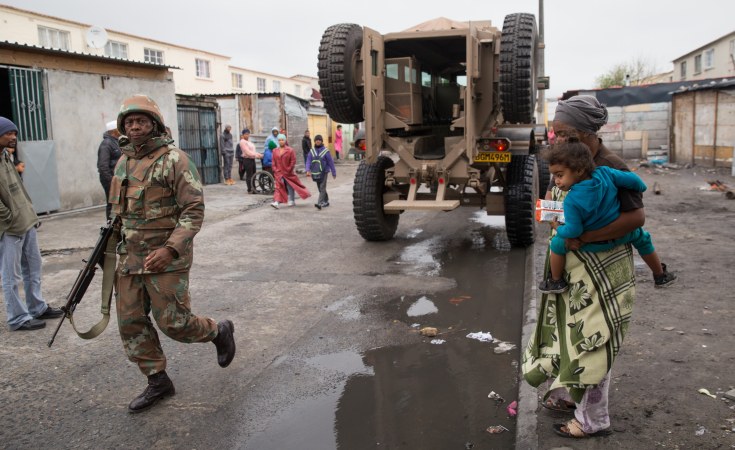 With only weeks remaining of the SANDF's deployment to the Cape Flats, it's hard to assess the impact of the troops' presence. But on Wednesday, one point raised by cops, a colonel and community members was consistent: the military deployment should be extended.

Makasi's sentiment was echoed by other community safety representatives at a briefing intended to help MPs assess the impact of the deployment of the SANDF to gang hot spots on the Cape Flats.

"We appreciate the presence of the army," veteran Elsies River activist Imran Mukkadam said. "In our community, it has sent a new message of hope."

From the SANDF's side, too, the conviction was expressed that the army deployment, code-named Operation Prosper, is having a positive impact.

Colonel Keith Aarons sketched the context of the troops' arrival on the Cape Flats on the weekend of 19 July.

"Using deception and surprise, we deployed in Manenberg," he said. "It is my humble opinion that that weekend, we saved some lives in Manenberg."

Previous Story
Lack of Education, Jobs and How It Affects Peace on Cape Flats
Next Story
Gangsters, The National Defence Force is Coming to a Township Near You!

Lack of Education, Jobs and How It Affects Peace on Cape Flats

Gangsters, The National Defence Force is Coming to a Township Near You!

Over 2,000 Murders in 6 Months - Who Will Head Police in Cape?
Tagged:
Copyright © 2019 Daily Maverick. All rights reserved. Distributed by AllAfrica Global Media (allAfrica.com). To contact the copyright holder directly for corrections — or for permission to republish or make other authorized use of this material, click here.