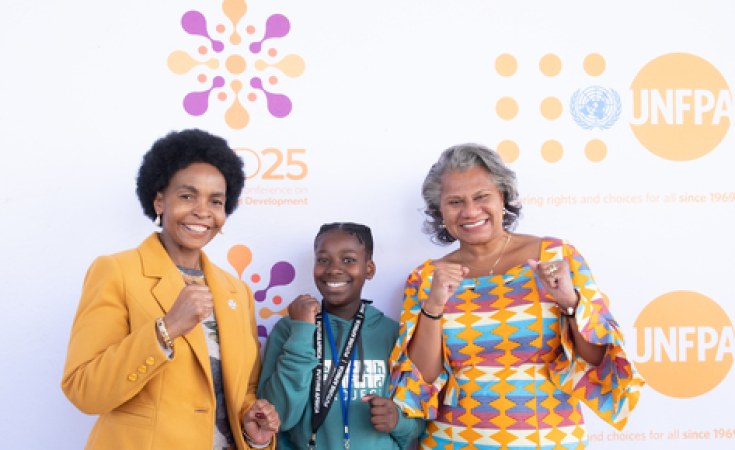 "Women bear the brunt of extreme weather events because they lack economic, political and legal power." Action needs to be escalated regarding climate change to create a sustainable green future, said Maite Nkoana-Mashabane, Minister in the Presidency for Women, Youth and Persons with Disabilities, South Africa.

"It is essential that we understand the relationship between the effects of climate change and the persistence of violence against women," she said.

Unless recurrent climate-related threats such as drought, flooding, disease outbreaks and gender-based violence are well mitigated through policy and programme mainstreaming, the vulnerability of those most affected, especially women and girls, cannot be effectively addressed, she added.

She was addressing a symposium on Sexual and Reproductive Health and Rights, Gender and Climate Change Resilience organized by UNFPA, the United Nations Population Fund in Pretoria, South Africa. The event was held at the University of Pretoria's Future Africa campus from 26-29 August.

She discussed how global climate change has disproportionately affected women and young girls, especially those living in the global South.

"In the deep south of Madagascar, I met young girls who were surviving by eating cacti because of the severe drought that had impacted on their food security. Cacti, as a food source, provide insufficient nutrients to prepare women for reproduction," she said.

During Cyclone Idai, which ravaged Malawi, Mozambique and Zimbabwe earlier this year, pregnant women found themselves giving birth in the most adverse of conditions, Dr. Julitta said.

The event attracted participants from across Africa. It sought to generate game-changing fast-track actions for building climate change resilience. The symposium also provided a platform for cultivating strategic direction on programmatic, partnership and financing opportunities, with linkages to the International Conference on Population and Development (ICPD), sexual and reproductive health and rights, gender and climate change resilience for the region.

The ICPD Programme of Action in 1994 recognized that ecological problems, such as global climate change, largely driven by unsustainable patterns of production and consumption, add to the threats to the well-being of future generations.

These threats impact many people, especially those in poor communities. Extreme climate-related hazards now occur regularly in Africa - such as drought in the Sahel region, severe water scarcity, more frequent and extreme El Niño events, and severe storms such as cyclones Idai and Kenneth.

These exacerbate the vulnerability of a large proportion of people, especially women of reproductive age, adolescents and other marginalized groups. Climate-induced natural disasters limit their access to sexual and reproductive health services, safe water and improved sanitation, food security, and education.

When a natural disaster strikes, the number of people in need of emergency reproductive health services or protection from gender-based violence escalates.

A key speaker at the symposium was 12-year-old 'eco-warrior' Yola Mgogwana from Khayelitsha, South Africa, who highlighted climate-induced threats that form part of her daily reality. She described the effects of the severe drought that plagued the Western Cape, South Africa in 2017. With dams at only 11 per cent full at one stage, panic ensued among residents that 'Day Zero', when taps ran dry, would become a reality. To date that day had not been reached.

She said that young people felt more passionately about climate change "because it will affect us most deeply. I will probably still be alive long after many of you [have passed on], so the planet's future is my future," she said.

"As youth, we care. We have barely spent a decade on this planet, but we care. What about the rest of you?" she asked in a call to resounding action.

The symposium produced a Call to Action that outlined the connections and concrete commitments for ICPD contribution to climate change adaptation and resilience. These include the following:

Tagged:
Copyright © 2019 UNFPA East and Southern Africa. All rights reserved. Distributed by AllAfrica Global Media (allAfrica.com). To contact the copyright holder directly for corrections — or for permission to republish or make other authorized use of this material, click here.