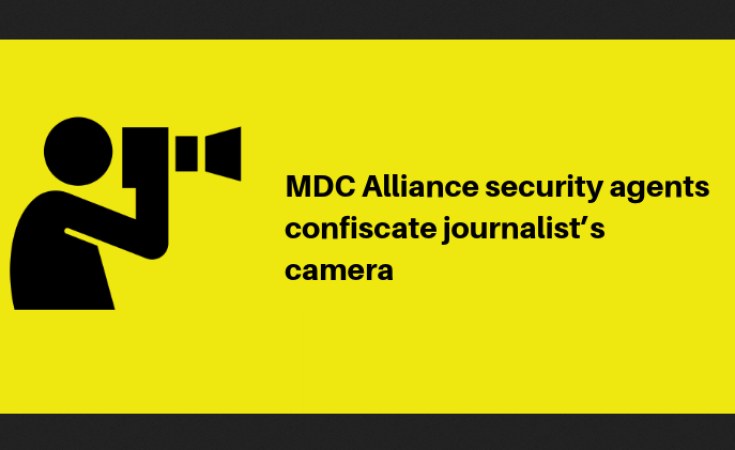 Goldstein is the founding journalist of online publication, State of the Nation.

According to Goldstein, unidentified members of the MDC Alliance security team harassed him during his coverage of the rally. He told MISA Zimbabwe that the harassment was initially to deter him from taking any pictures of the rally proceedings.

He then decided to leave the venue to avoid further harassment. However, on his way to his vehicle,  a group of about nine men he believes were part of MDC Alliance leader Nelson Chamisa’s security details, accosted him and took his Canon 6D camera.

MDC Alliance secretary-general Charlton Hwende condemned the harassment of journalists at the party’s events. He invited Goldstein to contact the party so that the matter can be fully investigated.

MISA Zimbabwe is assisting Goldstein with the legal services necessary to recover his camera.

MISA Zimbabwe condemns this violation of Goldstein’s media freedoms, in particular, the confiscation of his camera.

MISA Zimbabwe has in the past engaged political parties across the political divide to ensure that their respective members and supporters do not interfere with the lawful work of journalists.

MISA Zimbabwe calls upon the MDC Alliance to ensure that the confiscated camera is recovered and returned to the journalist.

The Media Institute of Southern Africa (MISA) Zimbabwe was founded in 1996. Its work focuses on promoting, and advocating for, the unhindered enjoyment of freedom of expression, access to information and a free, independent, diverse and pluralistic media.

Read the original article on MISA.

Here's What Zimbabwe Opposition Leader Chamisa Is Up To
Tagged:
Copyright © 2019 Media Institute of Southern Africa. All rights reserved. Distributed by AllAfrica Global Media (allAfrica.com). To contact the copyright holder directly for corrections — or for permission to republish or make other authorized use of this material, click here.