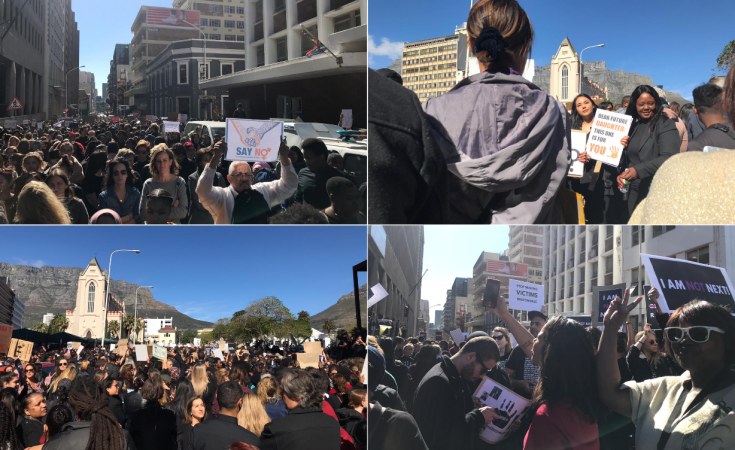 allafrica.com
#AmINext protesters wearing black in support of the fight against gender-based violence took their demonstrations to the gates of Parliament and the Cape Town CBD.
News24Wire (Cape Town)
By Jenni Evans

The fear and horror over the rape and murder of women was brought to the attention of delegates attending the World Economic Forum in Cape Town on Wednesday with the refrain "Where is Cyril? Where is Cyril" being chanted by protesters outside the Cape Town International Convention Centre (CTICC).

The echo of stun grenades being fired at protesters reverberated around the CBD, while a water cannon sprayed others sitting at a highway off-ramp and police vehicles scuppered their plan to occupy the highway until President Cyril Ramaphosa spoke to them.

Posters bore the names of murdered UCT student Uyinene Mrwetyana, Meghan Cremer whose body was found in Philippi and Lynette Volschenk who was dismembered in her own home, while slogans saying "Fuck your agenda, we are sore" were written on pieces of cardboard in bold, black markers.

Gaby du Toit and her friend, Neo Mbabama, from UCT said they were there in solidarity with women."We are tired, we are always hurting, and this is our breaking point," said Mbabama.

"It's not your vagina," chanted a group of women as they squeezed between concrete and wire barriers to try and get closer to the CTICC.

Dr Olive Shisana, the chairperson of the interim committee on gender-based violence and femicide, had earlier arrived to speak to a group of people holding an eerily silent protest close to the CTICC.

They had thick tape over their mouths and did not say a word until Shisana arrived and tried to address them.

They tore the tape off their mouths in anger when Shisana told them she was not a government minister.

"You are failing us," they shouted at her as she tried to keep talking, with some chanting: "State of emergency now" and "We want Cyril".

"As women in leadership in this country, what are you doing?" shouted a woman as people behind her chanted: "How many more?"

Eventually, Shisana opted to step aside and abandon the attempted address.

Speaking on the sidelines, she said the protesters' demand for a state of emergency over the killing and rape of women was not something that could be "made on the fly".

Shisana added a summit was held to discuss femicide and it was acknowledged there that interventions to prevent violence had not worked before.

"What we have realised is that a lot of what we are doing has had absolutely no impact. It doesn't have to simply deal with a response to women who become victims, but it must be at the level of prevention," she said.

Two more provinces were being consulted over a proposed strategy to prevent violence, and costing was being done, she added. "Everybody is working around the clock to the deal with this scourge."

Hours later, Cape Town's streets were a blare of sirens as protesters made their way from the CTICC to the freeway adjacent to it.

Eventually, they sat at an intersection and a water cannon was unleashed on them.Some people were seen being detained by the police but further information on their situation was not immediately available.

Previous Story
Call for Action from Leaders and Business on Violence against Women
Next Story
Women Protest Against Rape and Femicide - SAPS Arrest Marchers, Use Stun Grenades and Turn Water Cannon On Crowd

Call for Action from Leaders and Business on Violence against Women

Miss South Africa Asks Men to Write Love Letters Against Violence
Tagged:
Copyright © 2019 News24Wire. All rights reserved. Distributed by AllAfrica Global Media (allAfrica.com). To contact the copyright holder directly for corrections — or for permission to republish or make other authorized use of this material, click here.