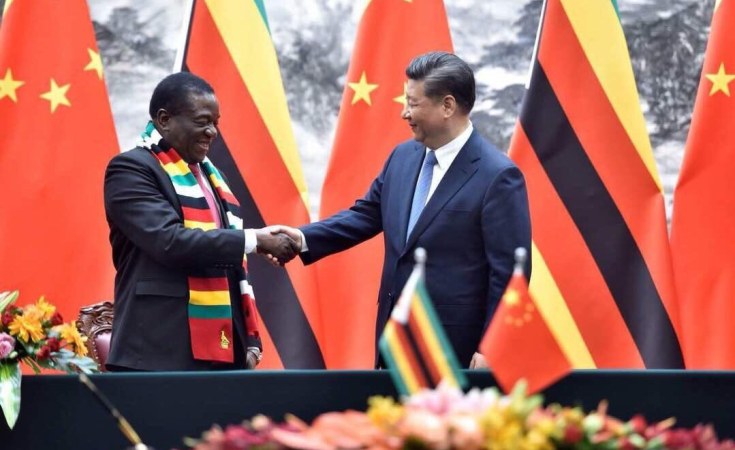 Cape Town — PRESIDENT Mnangagwa said yesterday he was happy with the pace of ongoing dialogue with United States President Donald Trump, which is aimed at bringing an end to illegal and ruinous economic sanctions imposed on Zimbabwe.

He said this in an interview with Bloomberg TV at the World Economic Forum (WEF) on Africa here yesterday.

The President said relations between Zimbabwe and the US, were cordial in nearly two decades, adding that while the country worked on its reform agenda, it had also focused on rejoining the family of nations and normalising relations with the US.

"We have rejoined the family of nations," said President Mnangagwa.

"I am happy that dialogue with Trump is ongoing. I am happy with the progress we are so far making, which had never happened in 20 years."

The US imposed sanctions on Zimbabwe in 2001 which were not approved by the United Nations (UN).

The sanctions have been partly blamed for constricting the economy by blocking access to international concessional funding and restricting free trade with all global economic actors.

While Zimbabwe is in arrears, which partly explains its failure to access credit from the International Monetary Fund (IMF), World Bank (WB) and African Development Bank (AfDB), the US sanctions have a clause that blocks support to Harare.

This makes it difficult for Zimbabwe to secure cheaper lines of credit.

Since November 24, 2017, President Mnangagwa has been working around the clock on a raft of reforms, without external funding as is ideal, in order to reboot the economy.

This was after the economy lost an estimated 50 percent of its Gross Domestic Product (GDP) over the decade to 2008, characterised by hyperinflation.

Results of on-going reforms under the Transitional Stabilisation Programme (TSP), have started to yield results as demonstrated by primary budget deficit recorded since November last year, through to the first half of 2019.

But in the absence of resources to support the reforms, President Mnangagwa said the country needed to rely on resources at its disposal.

"There are resources at our disposal," he said, adding that "the resources we have must be exploited, we must create a situation, an environment to attract global capital".

Government has set a target to grow the mining sector to a US$12 billion industry by 2023 from US$4 billion as of 2018, as it targets an Upper Middle Income status under Vision 2030.

Zimbabwe is looking to borrow US$1,9 billion from the Group of Seven wealthy nations to settle its arrears with the World Bank and the African Development Bank (AfDB).

Harare repaid arrears to the IMF in 2015, but under the pari-passu rule, remains ineligible for fresh credit, as it has to pay all creditors.

Hopes are high that once Zimbabwe gets support from the G7, including Britain, Germany, France, Japan and the United Starts, it would be able to repay the World Bank and the AfDB, then borrow again from the Bretton Woods to repay the G7.

This essentially means the country would have restored its debt, borrowing to normalise its default position and then remaining with fresh credit and books that are in good order.

But before doing so, the country must complete a credibility test in the form of a staff monitored programme to restore key economic fundamentals.

Zimbabwe is due for a review on this in March next year.

Govt Plans Law Against Zimbabweans Calling for Sanctions
Tagged:
Copyright © 2019 The Herald. All rights reserved. Distributed by AllAfrica Global Media (allAfrica.com). To contact the copyright holder directly for corrections — or for permission to republish or make other authorized use of this material, click here.

Djibouti Looks to Ethiopia to Gauge Its Economic Future
Environment