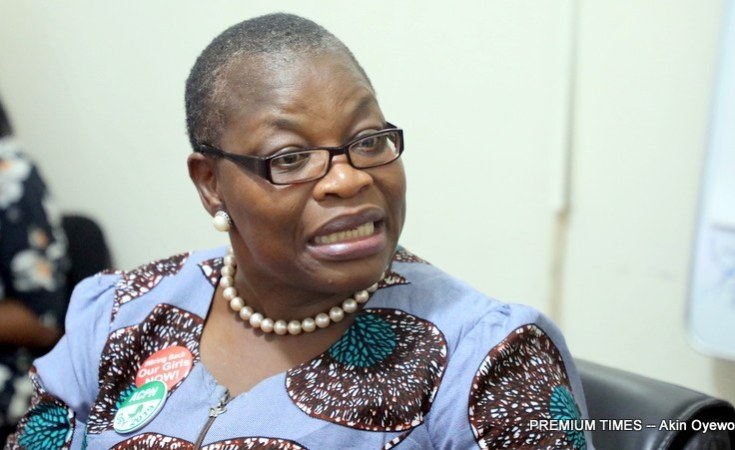 Mrs Ezekwesili, a social critic and former presidential candidate, was criticised by some Nigerians on Twitter for attending the forum amidst diplomatic rows between Nigeria and South Africa.

There has been a flurry of diplomatic activities between the two countries since tension over xenophobic attacks on Nigerians and other Africans in South Africa escalated following the report of fresh attacks on Saturday.

The presidency also announced on Tuesday that President Muhammadu Buhari would be sending an envoy to South Africa on the issue.

PREMIUM TIMES earlier reported how Shoprite malls were attacked in Lagos and Ibadan on Tuesday.

Also, some protesters on Wednesday morning stormed a Shoprite mall in Abuja to protest the attack on Nigerians in South Africa.

Shoprite is one of the South-African linked businesses attacked in some Nigerian cities on Tuesday. The others include telecoms giant, MTN, and clothing store, PEP.

"Madam Oby is the last person I expect would go to a WEF in South Africa that everybody has concluded Nigeria should stay away from," wrote a Twitter user, Henry Okelue. "I am really surprised that she of all people would do something she would have spoken very strongly against if somebody else did it."

Another handle tagged PDP Vanguard tweeted: "Obviously, Madam Oby can sell her destiny for Cameras and dollar! There's no justification whatsoever for her to accept the invitation if as clueless as @MBuhari can do the needful by boycotting the kangaroo WEF. Shame!!!"

Wale Adetona, tweeting via the handle @islimfit, described the former presidential candidate's conduct as 'hypocrisy'. He wrote: "This is hypocrisy of the highest order. Imagine if the government had not taken the decision to boycott WEF, the likes of Madam Oby and co would have done thread enough to sew agbada."

Another user tweeting via the handle @7even10en said Mrs Ezekwesili does not represent Nigeria at the forum. "Madam oby, you're there on your own and not as a Nigerian. #WEF #StopXenophobicAttacks #Xenophobia," the user tweeted.

In a slew of reactions, Mrs Ezekwesili argued that she was at the forum to ensure that the South African government takes decisive steps in putting an end to the attacks against Nigerians and other Africans in the country.

She tweeted: "Those who have genuine concerns about my being at @wef in South Africa, should please know that my decision to be here was thoroughly considered. I am in South Africa leveraging my (sic) ensure that @GovernmentZA never again looks away while our citizens are attacked, maimed & killed.

"My Life Vision is to always stand for the weaker. This is a role I play within & without Nigeria. For me, the next three days in South Africa are programmed to achieve a set of specific action by the @GovernmentZA. Our Citizens' preservation is what matters to me not the noise.

"Those of you who take delight in making 'Politics' of our Citizens' Lives can carry on with your usual trade. I stand strong on doing the things one can do to safeguard lives. Citizens' Lives are too sacred & important for me to be drawn into your latest 'playground'. Never."

The World Economic Forum is the International Organization for Public-Private Cooperation. The forum engages the foremost political, business and other leaders of society to shape global, regional and industry agendas.

It was established in 1971 as a not-for-profit foundation and is headquartered in Geneva, Switzerland. Details on its website says it is independent, impartial and not tied to any special interests.

The 2019 event is taking place in Cape Town, South Africa.

The theme of this year's meeting, holding between September 4th and 6th, is 'Shaping Inclusive Growth and Shared Futures in the Fourth Industrial Revolution'.

Details of the event, available on the website of the forum, show that Mr Ovia is one of the co-chairs of the forum.

Nigeria 'Draws Red Line' Over Xenophobic Attacks in South Africa
Tagged:
Copyright © 2019 Premium Times. All rights reserved. Distributed by AllAfrica Global Media (allAfrica.com). To contact the copyright holder directly for corrections — or for permission to republish or make other authorized use of this material, click here.

Gold Theft in Zimbabwe - a Huge Problem But Is It Getting Worse?
Business