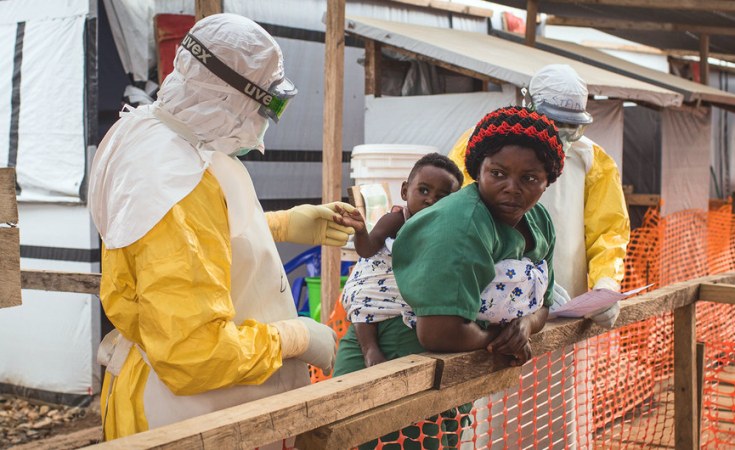 Vincent Tremeau/UNICEF
A health worker checks a child potentially infected with Ebola being carried on the back of a caregiver at the Ebola Treatment Centre of Beni, North-Kivu province, Democratic Republic of Congo in March 2019.
World Health Organization (Geneva)

A wooden boat sways idyllically in a marsh of the Malagarasi River where it begins from an eastern mouth of the great Lake Tanganyika, Africa's deepest lake and the world's longest lake. Along the river, muscled men pull loaded bicycles under the scorching sun. This port in Ilagala village in Kigoma Region idles in daytime and bustles with activity at night.

It is one of the unofficial points of entry into the United Republic of Tanzania from the Democratic Republic of the Congo (DRC).

"Local traders export to DRC, and we also have arrivals from the DRC," says Asina Malinde, a Village Executive in Ilagala. From the DRC, boats come loaded with cargo. Malinde now worries that these boats can import the Ebola virus disease because of the ongoing outbreak in their departure vicinity.

Ilagala village is one among many communities in Kigoma Region facing the threat of Ebola importation due to the informal cross-border movements of people for social and economic activities. Within 12 hours of crossing Lake Tanganyika, which borders four countries, Tanzanian traders dock in DRC.

"Our people sail to the DRC and Congolese come here to bring business, and some stay briefly. Because there is an Ebola outbreak in the DRC, we know our village is at risk," Malinde says.

No Ebola case has been recorded in Tanzania. But considering the huge threat of possible importation, the Government is stepping up its preparedness efforts in the high-risk border regions, in line with the World Health Organization's regional road map for Ebola response.

For two weeks, the Ministry of Health, Community Development, Gender, Elderly and Children, with support from WHO and partners, organized table-top exercises and field drills in the Kagera and Kigoma Regions.

"We have included Ebola as a permanent agenda on our village meetings to inform our people to notify village leadership whenever they receive visitors or patients referred from the DRC regions that are affected by Ebola," says Malinde. "We are very grateful for the Government and development partners for designating a facility in our village to provide Ebola treatment services."

The current Ebola outbreak in the DRC remains precarious, with infection transmissions continuing to occur in communities and health facilities. As of 30 August, a total of 3 004 cases and 2 006 deaths had been recorded.

The simulation exercises reflect real-life challenges of managing an Ebola outbreak. In Ilagala village, for example, actors arrived with Ebola symptoms at the health facility, seeking medical attention. In total, 15 drills took place at various health facilities and four official point of entry in Kagera and Kigoma regions. During the simulation drills, emergency response teams at designated health facilities and border points of entry responded to dummy Ebola cases. The exercise management team noted strengths and weaknesses. Subsequent debriefing sessions were used to give feedback and propose remedial where needed.

The exercises tested the level of preparedness and response to assess the operational capabilities at the regional and district levels, including the ability to apply preparedness and response frameworks for Ebola virus disease and front-line workers' knowledge and skills in disease detection and case management, in line with national and international clinical guidelines and protocols.

WHO, as the lead technical agency responsible for the design and implementation of such preparedness exercises, ensured that a One Health approach was used - that all relevant sectors from the regional, district and health facility levels were involved to ensure a well-coordinated response. This, then, included epidemiologists, clinicians, laboratory experts, communication officers, social mobilization experts, refugee experts, logisticians, point of entry focal points and infection prevention and control experts.

These exercises were made possible with financial support from USAID, through the HRH2030 Programme of Chemonics International.

What the drills revealed

"This exercise has been useful to point out gaps we had. The feedback informed us of areas for improvement. We are going to work on these gaps to make sure our response framework at all levels can properly manage an [Ebola] case," says Peter Nsanya, Kigoma District Medical Officer.

Among the positive points the drill underscored, all involved districts had a designated Ebola treatment centre. The adequacy of some of them came up short as treatment centres but sufficient as holding units. The drills indicated an urgent need for a review and reclassification of the standards for each facility, its function in the first 24-72 hours after a suspected Ebola case is identified and the minimum equipment and supplies that must be on hand for each facility.

Other strong points included the multi-sector collaboration at the border points of entry, community engagement, staff trained in Ebola case management and access to courier services to transport samples.

"We also found areas that needed improvements at the [Ebola treatment centres], temporary holding facilities and the overall emergency response framework at the district level and the facility level. We have worked with facilities, district and regional level to rectify or escalate preparedness where necessary," says Dr Faraja Msemwa, Public Health and Disaster Management Specialist in the Ministry of Health, Community Development, Gender, Elderly and Children.

DR Congo, Rwanda Ministers Optimistic About Joint Ebola Fight
Tagged:
Copyright © 2019 World Health Organization. All rights reserved. Distributed by AllAfrica Global Media (allAfrica.com). To contact the copyright holder directly for corrections — or for permission to republish or make other authorized use of this material, click here.