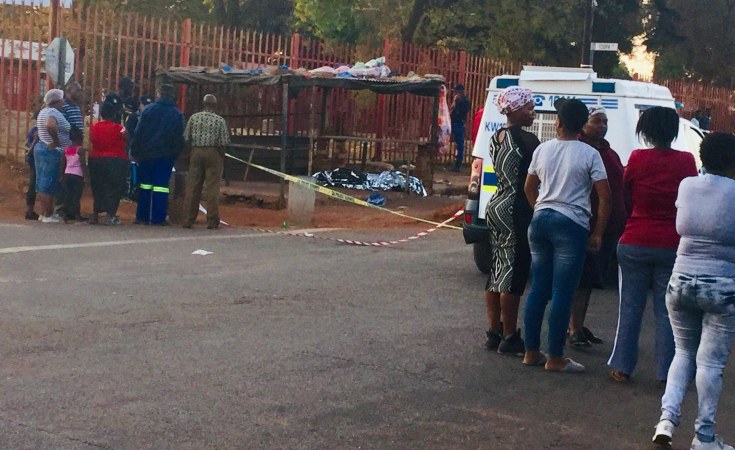 Kimberly Mutandiro/GroundUp
Crime scene in White City Section of Kwathema township. “It is alleged that a group of people wanted to attack a shop owned by a foreign national. The landlord came out to rescue the shop owner. He warned and threatened the group of people that were outside his yard. A fight ensued when he saw that he was overpowered he took out his licensed firearm and started shooting randomly. The 35-year-old suspect was traced, arrested and detained at Kwathema SAPS,” said a police statement.
Daily Maverick (Johannesburg)
analysis By Aisha Abdool Karim, Bheki Simelane and Chanel Retief

A total of 289 people have been arrested and five people have died after three days of violence across Gauteng. Even as those arrested began making their first appearance in court and police presence increased at hot spots, the looting continued for the fourth day.

On the evening of Tuesday 3 September, 100 people were arrested in Ekurhuleni for public violence and looting. These were the latest arrests related to the outbreak of xenophobic violence in Gauteng over the past three days, with a total of 289 people arrested from 1 to 3 September.

In a statement on Tuesday, the police said people had been arrested for "criminal acts including public violence, malicious damage to property and theft".

The statement also said "the situation has been stabilised in parts of Tshwane, Ekurhuleni, Johannesburg Central, Jeppe and Cleveland policing areas".

Five people have died in the violence. The names of the dead have not yet been released, as they were yet to be identified by family members, the police said. Of these,...

Previous Story
Gauteng Xenophobia Attacks Akin to 2008 Crisis - Institute of Race Relations
Next Story
Violence Against Non-Nationals and Women Affects All of Us, Whoever We Are

Tension Between Refugees, South African Police Amid Removals
Tagged:
Copyright © 2019 Daily Maverick. All rights reserved. Distributed by AllAfrica Global Media (allAfrica.com). To contact the copyright holder directly for corrections — or for permission to republish or make other authorized use of this material, click here.