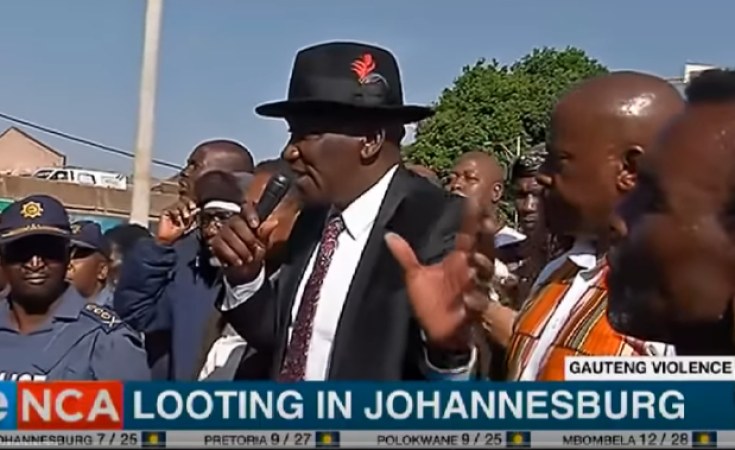 The photos and videos of widespread looting and burning of stores and businesses owned by foreign nationals in South Africa look like scenes out of an apocalyptic film.

At least seven people have been killed in this latest mayhem, while hundreds have been arrested in connection with the violence.

All the while, we South Africans hang our heads in shame, with #SayNoToXenophobia and other related hashtags trending in the country in the past days.

South Africa no stranger to xenophobia

In 2008, the world watched in horror as more than 60 people were killed in an outburst of attacks against foreigners in South Africa. It has proved not to be an isolated incident: Xenophobia has lurked in the country over the past decade, rearing its ugly head every couple of years.

The most recent spate of violence occurred just this week. It began on Sunday evening in Jeppestown, a suburb in Johannesburg. Reports say the violence sparked in reaction to the deaths of at least two people killed in a building fire.

The attacks then spread to other parts of Johannesburg, including its central business district, Malvern, Tembisa, Katlehong and Alexandra -- all typically working class areas that house and employ foreign nationals.

Whereas President Cyril Ramaphosa has been criticized for dragging his feet in responding to previous instances of violence, he condemned it relatively quickly this time.

"There can be no justification for any South African to attack people from other countries," he said in a video posted to Twitter on Tuesday. Ramaphosa said the attacks on businesses owned by "foreign nationals is something totally unacceptable, something that we cannot allow to happen in South Africa."

"I want it to stop immediately," he added.

This wasn't good enough for the Uber driver giving me a lift home of Wednesday, though.

"If this had happened while Zuma was a president," he said, referring to former South African and ANC politician Jacob Zuma, "he would have spoken to us in person, or at least on national TV."

South African businesses have been shut down in Zambia and Nigeria. Nigerian Airlines is offering free flights back home to Nigerian nationals living in South Africa.

The shame of being South African

It's an embarrassing, shameful situation for us South Africans to find ourselves in.

The national conversation is somber. News about the xenophobia is inescapable. It's in the papers, on TV, on social media and in water-cooler conversations at work and schools.

Lauded the world over for our peaceful defeat of apartheid and progressive constitution, we are not nearly as beloved on the African continent itself.

The way we treat African foreign nationals is our own fault, starting with the government and ending with ordinary citizens.

From mayors to opposition party leaders, department officials, and even the Zulu king, South African politicians have been known to spout xenophobic rhetoric.

We South Africans are still waiting for strong condemnations of the xenophobic violence from leaders who either don't seem to understand how powerful their words are in influencing public opinion, or don't care enough about the state of the nation.

Foreign nationals are often used as a scapegoat for the South African government's failings. The country is gripped by a harsh economic climate marked by slow economic growth, high unemployment and an ever-increasing chasm between the haves and have-nots.

The rhetoric filters down into the mouths of ordinary South Africans, who, 25 years after apartheid ended, are still struggling to put food in the bellies of their families.

"They steal our jobs and our women" is the common narrative painted by South Africans as the reason for xenophobia. Foreign nationals are often accused of being criminals and drug dealers, undercutting South Africans for work, burdening what are already limited social services, and wooing South African women.

Ndebele, whose name has been changed because she fears for her safety, works for a South African family as domestic help.

A 2015 study found that around a third of foreign nationals in South Africa are employed in the informal sector as traders, domestic workers or car guards.

These workers don't own land, have access to the means of production and capital, or places in our higher education institutes. Often, they are just as desperate as the people attacking them.

In a country where 29% of the employable population doesn't have a job, the xenophobic attacks are evidence that desperation among poor South Africans is mounting.

We South Africans have to face some harsh truths. And the truth is that when the violence subsides, we'll be left with the bare bones of reality: a failing government with a leadership vacuum and non-existent jobs in a motionless economy.

Shaazia Ebrahim is a South-African based journalist who reports mainly on gender, health and politics.

Trolling, Threats As Nigeria Celebs React to South Africa Attacks
Tagged:
Copyright © 2019 Deutsche Welle. All rights reserved. Distributed by AllAfrica Global Media (allAfrica.com). To contact the copyright holder directly for corrections — or for permission to republish or make other authorized use of this material, click here.