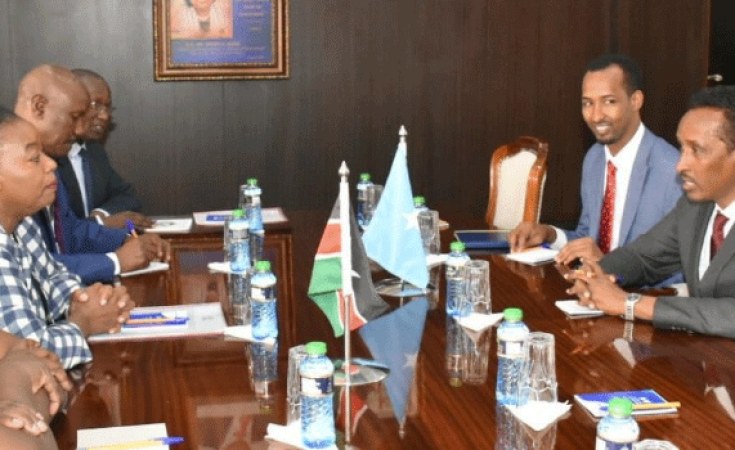 Nairobi — The African Union Peace and Security Council (AU-PSC) on Thursday tasked the AU Commission Chairperson Moussa Faki to reactivate engagements between Kenya and Somalia in a bid to resolve the maritime boundary dispute between the two nations.

The resolution was made at the end of the 873rd Council meeting in Addis Ababa where Kenya's Permanent Representative to the AU, Amb Catherine Mwangi, and Somali's State Minister of Foreign Affairs and International Cooperation, Abdulkadir Ahmed-Kheir Abdi, made presentations on the dispute that has threatened diplomatic relations between the two countries.

"The AU-PSC requests the Chairperson of the AU Commission to urgently make use of his good offices, either personally or through the appointment of a special envoy to engage with the parties towards finding an amicable and sustainable settlement, in consultation and collaboration with the relevant regional mechanisms," a communique issued at the end of the Council meeting read in part.

The Council also urged Kenya and Somalia to refrain from any actions that may lead to the escalation of tension.

"AU-PSC Strongly calls on the Federal Republic of Somalia and the Republic of Kenya to pursue and intensify their engagements with a view to finding an amicable and sustainable solution to their maritime boundary dispute; in this regard, calls upon the parties to refrain from any action that may threaten the existing good neighbourliness between the two countries," the six-point document outlined.

The decision of the 15-member organ to which Kenya was re-elected on February 8 for another three-year term came even as the International Court of Justice (ICJ) announced a two-month postponement of scheduled oral submissions that were initially slated for Monday, September 9.

ICJ will now convene on November 4, the court registrar Philippe Gautier wrote in a letter to Attorney General Kihara Kariuki on Thursday.

Kariuki had written to the court on Tuesday seeking for a 12-month postponement to allow him to recruit a defence team.

ICJ had on July 23 published a week-long schedule for the hearing of two rounds of oral submissions, scheduling the first round between September 9 and September 11 with the second round slated to run from September 12 to September 13.

Somalia filed the boundary delimitation dispute on August 28, 2014, staking a claim on an estimated 62,000 square miles oil-rich triangle in the Indian Ocean.

The contested area has four of the 24 oil blocks that have traditionally been under Kenya's Exclusive Economic Zone until Somalia's legal challenge in 2014.

Mogadishu's case is premised on Article 15 of the Convention of the Law of Sea adopted in 1982, Kenya saying the disputed area was in fact under its jurisdiction before the convention was enacted.

Somalia country wants the sea boarder extended along the land boarder; a plea which if granted could limit Kenya's access to high seas on its Indian Ocean shore technically rendering the country landlocked.

Counsel representing Somalia had been given until June 18, 2018 to file their written submissions with Kenya required to file responses by December 18 of the same year.

Kenya's Ministry of Foreign Affairs and International Cooperation has however insisted on a negotiated solution to the dispute, accusing Somalia of acting in bad faith when it filed the suit despite there being an active mediation process.

Kenya had challenged the admissibility of Somalia's case at the ICJ in September 2016 on grounds that the court lacked jurisdiction to entertain the application.

ICJ however dismissed the objection in February 2017 clearing the way submissions by the two parties.

An attempt by Somalia in February to auction four oil blocs in the contested maritime area resulted into a dramatic escalation of tension between Kenya and Somalia with MFA summoning its diplomat in Mogadishu while referring Somalia's envoy back to Mogadishu for "urgent consultations".

The apparent selling of oil blocks in the disputed area at a London-auction in February 7 for prospective exploration angered Nairobi, the Foreign Affairs Principal Secretary Macharia Kamau terming the move "unparalleled affront and illegal grab at the resources of Kenya."

"This outrageous and provocative auction deserves and will be met with a unanimous and resounding rejection by all Kenyans as well as all people of goodwill who believe in the maintenance of international law and order and the peaceful and legal resolution of disputes," he had said adding that Somalia's actions were "tantamount to an act of aggression against the people of Kenya and their resources."

Court of Justice Postpones Maritime Dispute Case for a Year