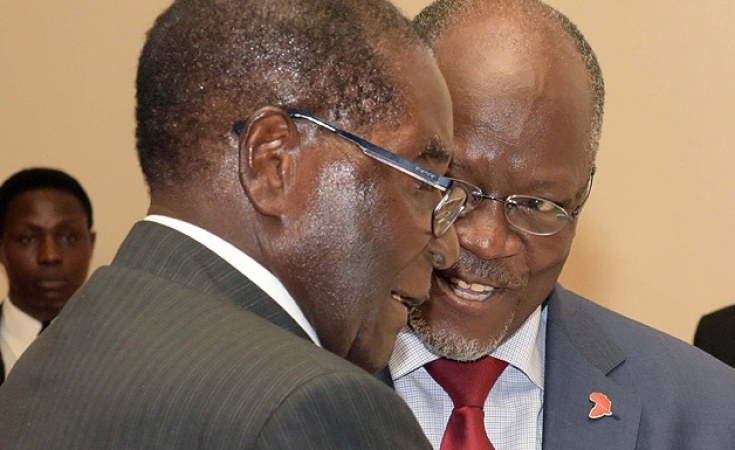 Dar es Salaam — The President of Tanzania John Pombe Magufuli on Friday September 6 reacted to the death of Zimbabwe's founding president Robert Mugabe who passed away at the age of 95 in Singapore where he was receiving treatment.

President Magufuli expressed profound sorrow following the passing of Mugabe, saying Africa has lost one of its brave leaders.

"I have received with sadness the news of the death of Retired President and founding Father of Zimbabwe Robert Mugabe. Africa has lost one of her brave leaders who resisted colonialism with actions. May God rest his soul in eternal peace, Amen," president Magufuli posted on his official Twitter handle.

Magufuli has joined other leaders across the world who have reacted on the death of Robert Mugabe -the man who ruled Zimbabwe for 37 years before being ousted in a military takeover in November 2017.

His death marks the definitive end of an era in the history of the former British colony.

For decades since Zimbabwe gained independence from Britain in 1980, power had been concentrated in Mugabe's hands.

Government will not interfere in cashew nuts buying, says Minister

Before Emmerson Mnangagwa, the current president took over power, an entire generation of Zimbabweans knew no other leader than Mugabe.

After his fall, Mugabe was granted the status of a respected father of the nation and a generous pension by the new government. The move angered his many opponents and upset many of the victims of his regime.

In a statement early on Friday September 6, MrMnangagwa called Mugabe "an icon of liberation, a pan-Africanist who dedicated his life to the emancipation and empowerment of his people. His contribution to the history of our nation and continent will never be forgotten. May his soul rest in eternal peace."

The former political-prisoner-turned-guerrilla leader swept to power in the 1980 elections after a growing insurgency and economic sanctions forced the Rhodesian government to the negotiating table.

In office, he initially won international plaudits for his declared policy of racial reconciliation and for extending improved education and health services to the black majority. But his lustre faded quickly.

Mugabe Spent Final Days Using Uber Rides - Jonathan Moyo
Tagged:
Copyright © 2019 The Citizen. All rights reserved. Distributed by AllAfrica Global Media (allAfrica.com). To contact the copyright holder directly for corrections — or for permission to republish or make other authorized use of this material, click here.