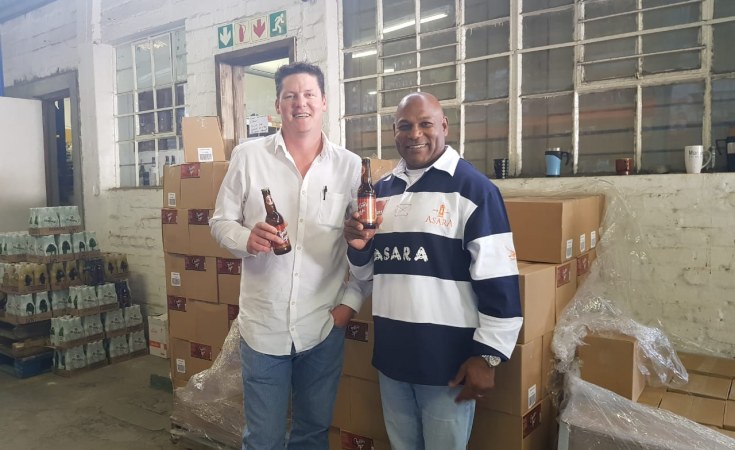 Photo: Twitter
Chester Williams, part of the South African rugby team who won the World Cup in 1995, has died. The day before his fatal heart attack, Williams was launching his own beer, Chester's Lager. The tweet which accompanied this photo read: Myself and Ian Director at Norman Goodfellows Distributions, loading Chester's Lager for Tyger Milk Durbanville.
News24Wire (Cape Town)
By Lynn Butler and Lloyd Burnard

The 49-year-old died from a sudden heart attack.

Sport24 understands that Williams had complained about a pain in his chest on Friday afternoon after returning to his home in Cape Town after a gym session.

He was rushed to hospital, but passed away on arrival.

Since retiring he has been active on the coaching circuit including stints with the Springbok Sevens team, Super Rugby's Cats and the Pumas.

Williams was the head rugby coach for the University of Western Cape (UWC). The university's media manager tweeted that he was in contact with Williams on Friday morning.

Less than two months ago, Williams' Springbok wing partner James Small died at the age of 50, also from a heart attack.

South African rugby lovers and friends and former team-mates of Williams were taking to Twitter on Friday evening to pay their respects to a man who is one of the most iconic Springboks ever to have played the game.

Just last week, Williams invited Cape Town media and members of the rugby community to the launch of a new business venture that saw him create his own brand of beer called Chester's Lager and IPA.

The product is due to be sold in Japan during the 2019 Rugby World Cup.

I'm reeling. I gave Chester a lift to the UWC Admin block yesterday. We were chatting on whatsapp just morning. The guy was fine. ??????-- Gasant Abarder (@GasantAbarder) September 6, 2019