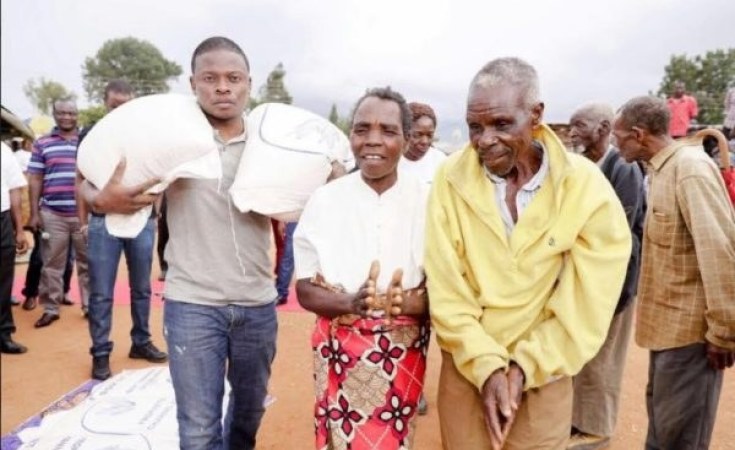 South Africa-based Prophet Shepherd Bushiri has announced resumption of free maize distribution exercise in Malawi with a stern warning to politicians against blocking it.

Bushiri made the announcement in his church on Sunday in response to a recently released report by Southern African Development Community (Sadc) Regional Vulnerability Assessment and Analysis Programme (Rvaa).

The report has revealed that over 1.1 million Malawians will face hunger between October 2019 and March 2020 with 676 000 already affected by food shortage.

"I have been disturbed reading in the news that over 1.1 million people in Malawi will be going hungry between October this year and March next year.

"Just as how I have responded to problems of food shortages in Zambia, South Africa, Mozambique, Zimbabwe and Nicaragua, I am announcing that in December I will be supporting every hungry person in Malawi with free maize distribution," he said.

However, Bushiri warned some politicians against tendencies of blocking him, saying he has been meeting and talking with several politicians, traditional authorities and religious leaders in Malawi on the issue and he has seen the need to come in and help.

"I can confirm that Prophet Bushiri, through his Shepherd Bushiri Foundation (SBF), will resume the nationwide relief maize distribution exercise in December," said Nyondo.

Asked why Bushiri is calling for political support, Nyondo said the history of his maize distribution exercise in Malawi has, somehow, been a history of conflict.

"We all know how he was, in some instances, blocked from helping the people. He doesn't want that anymore. He wants a smooth process and he is sure that no sane leader would stand in the way of helping the people," said Nyondo.

Nyondo was also quizzed as to why Bushiri will resume the exercise in December when the report says people will go hungry beginning October. In response, Nyondo said: "What we have, of now, is a report from SADC--which is a regional block; we have not yet heard from government. Government has said they will release their report too. So, we are waiting for the government report to provide us with a clear picture of where to focus. However, we have already started our loose planning," he said.

Government spokesperson Mark Botomani said he could not immediately comment on the matter because he had not heard the announcement by Bushiri.

Bushiri previously supported the country's disaster management programmes having supported local communities through provision of free maize for the past five years,

He also supported Salima District Council to construct dykes in most flood prone areas as part of disaster preparedness.

Just recently, the famous preacher through his Shephered Bushiri Foundation, handed a modern secondary school over to government. The school, Zolokere Community Day Secondary School - CDSS, in Rumphi which he constructed.

Bushiri has also in the past been supportive of the national football team, te Flames and promoted a lot of Malawian artists.

Over 41 Million People in Southern Africa are Food Insecure

Prophet Bushiri's Profits Face Scrutiny in South African Court
Tagged:
Copyright © 2019 Nyasa Times. All rights reserved. Distributed by AllAfrica Global Media (allAfrica.com). To contact the copyright holder directly for corrections — or for permission to republish or make other authorized use of this material, click here.