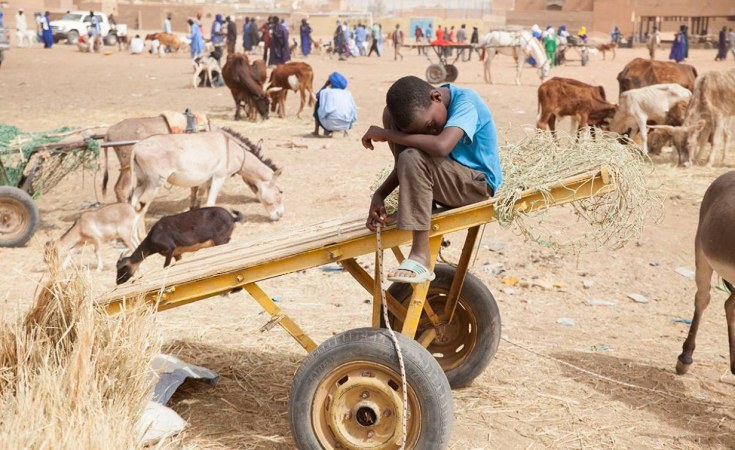 London — Vast swathes of land, from Africa to the Middle East, are being left useless by climate shifts and human pressures such as deforestation, mining and farming, threatening to hike migration and conflict, a senior U.N. environmental official warned.

The accelerating damage could cost the global economy a staggering $23 trillion by 2050 - and rich countries as well as poor will pay the price, said Ibrahim Thiaw, executive secretary of the U.N. Convention to Combat Desertification.

In poor communities, ailing land "fragments families" and causes young people to leave home, he told the Thomson Reuters Foundation in an interview.

"It creates friction and conflicts over access to land and water," he said by telephone during U.N. talks on the issue in New Delhi this week.

Even in richer places, land degradation around the world may mean some foods and other imported products people rely on will become more scarce, and migrant flows will increase, he said.

"When young people from one part of the world cannot produce enough for their families, they will have to move to another place. And we cannot stop them from migrating," Thiaw said.

"I don't think the world will watch and feel they are not affected," said the forestry expert, whose own family in Mauritania, on the edge of the Sahara, was hit hard by severe drought in the 1970s, losing many animals.

Efforts to cut the loss of productive land and restore damaged areas are underway, said Thiaw, formerly a Mauritanian official and deputy chief of the U.N. Environment Programme.

"The knowledge is there, the technology is there - it can be done. But the scale at which it's being done at the moment is not enough to change the curve," he said.

"We are still losing a lot of land," he added.

In Mauritania, a traditional livestock-herding nation, there is no forest left, he noted.

"It's all degraded land. You have the population growing on the one hand and resources shrinking on the other," Thiaw said.

In neighbouring conflict-hit Mali, he said, Dogon farmers and Fulani herders are fighting over resources as land suffers from growing heat and climate shifts, among other things.

"I know that area well and they do not hate each other. They are simply competing over land and water," Thiaw said.

One barrier to preventing such conflicts is that government and charitable funding to restore degraded land falls far short of what is needed, Thiaw said.

Private money is required to fill the gap, he added.

In Africa, that could be investment in turning land unsuitable for farming into wildlife reserves to attract tourists, or rethinking old mines as recreational lakes, he said.

Land that can no longer support crops might - with the advent of solar refrigeration - be used to produce organic or halal meat for international markets, supporting traditional herding cultures, he said.

In parts of China, degraded communal land has been leased long term to investors, who pay annual rent and offer jobs to local people at vegetable farms or other facilities they have opened after restoring the land, Thiaw said.

In places like Africa's Sahel region, on the southern edge of the Sahara desert, for instance, droughts are not a new phenomenon, as they used to happen seven to 10 years.

"Now they are every other year," Thiaw said.

Without swift action to keep more land viable and rehabilitate land that is no longer usable, threats ranging from hunger to forced migration and conflict could grow, he said.

"Land is really the economy. It's peace and security," he said.

Food Security Crisis Looms, Experts Warn at Kigali Summit
Tagged:
Copyright © 2019 Thomson Reuters Foundation. All rights reserved. Distributed by AllAfrica Global Media (allAfrica.com). To contact the copyright holder directly for corrections — or for permission to republish or make other authorized use of this material, click here.