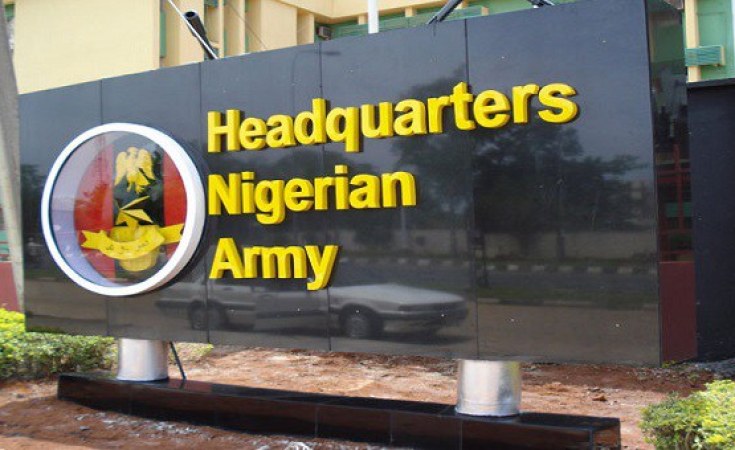 The Defence Headquarters has disclosed that children were not held as terrorism suspects in any military detention facility in the northeastern part of Nigeria.

The Acting Director of Defence Information, Col. Onyema Nwachukwu, disclosed this in a statement on Monday.

Nwachukwu disclosed that a group known as Human Rights Watch (HRW) was set to release a report accusing the Armed Forces of arbitrarily detaining children in its detention facilities in the North East.

He said that such report was not only false but capable of undermining the joint efforts of the military and other security agencies to restore peace in the region.

According to him, it is an established fact that Boko Haram Terrorists (BHTs) indoctrinate women and children who they use as suicide bombers in the theatre of operations.

"In the conduct of their operations troops arrest these children while attempting to detonate explosives and provide tacit support to insurgents such as intelligence on troops movement and deployments.

"Contrary to HRW claims however, the military manages children in the North East theatre as victims of war and not as suspects.

"Apprehended children are kept in secured places, where they are adequately fed, profiled and de-radicalized before their release.

"This was evidently captured in the HRW Report, where it stated that since January 2013, Nigerian Authorities have released at least 2,200 children from detention nearly all without charge.

"This statement further attests to the fact that the children are released to appropriate authorities after de-radicalization efforts by appropriate government agencies and NGOs," he said.

Defence spokesperson said that only profiled Boko Haram and ISWAP terrorists are held in detention pending their prosecution by appropriate prosecuting agencies, adding that the military was not vested with the power of prosecution.

He further clarified that aside the set of children involved in acts of terrorism, some adult female Boko Haram terrorists arrested in terrorists' enclaves during combat had also been found to be with children.

Nwachukwu added that during the process of profiling and investigations, the women opted to keep their children rather than hand them over to relations.

He explained that while the female terrorists were kept in the detention facility, their children were given protected care in a welfare holding facility where they could be accessed by their mothers under supervision by female personnel.

According to him, the children are provided with regular feeding, clothing, requisite medical attention, in-house spiritual and educational tutoring and other welfare needs.

"The DHQ therefore wishes to state that no children are kept and tortured in any detention facility.

"The children caught in the act of terrorism are moved to safe facilities such as the Borno State Rehabilitation Centre in Bulunkutu, Maiduguri, and Operation Safe Corridor, where they are de-radicalized, rehabilitated and reintegrated into the society.

"Those whose families could not be traced are handed over to IDP Camps officials for administration.

"It must also be noted that several attempts have been made by these sponsored Rights groups to lay allegations of arbitrary arrests and extra judicial killings at the doorstep of the AFN.

"This is an effort to undermine the successes so far recorded in the ongoing Nigeria's Counter terrorism and Counter insurgency operations against Boko Haram and ISWAP in the North East," he said.

The spokesperson also dismissed the insinuation that the armed forces were engage in arbitrary arrests since its operations, adding that its operations were intelligence driven.

He said that arresting and detaining members of the terrorists groups to face trial and obtain justice for innocent citizens and foreigners they killed could not be described as arbitrary or unlawful.

He added that their arrest and detention were professionally handled within legitimacy of the mandate of the counter terrorism and counter insurgency operations in the northeast.

According to Nwachukwu, terrorists and insurgents neutralized in combat with troops does not translate to extra judicial killing as portrayed.

"The military does not condone extra judicial killing and erring personnel are sanctioned according to the dictates of the military justice system and the constitution of the Federal Republic of Nigeria.

"The DHQ is using this medium to remind the general public that it works in conjunction with other relevant government agencies and NGOs in handling children in the various safe facilities provided by both federal and state governments.

"It is pertinent to state that over the years the military had periodically taken NGOs and other Civil Society Organizations (CSO) on guided tours of our operational areas to ensure transparency and openness.

"All NGOs and CSOs operating in the northeast and other parts of the country are enjoined to desist from publishing poorly researched and shallow reports on the activities of armed forces, as this is capable of undermining national security efforts to restore peace in the region," he said.

22,000 Nigerians Missing in North-East, Says Red Cross
Tagged:
Copyright © 2019 Vanguard. All rights reserved. Distributed by AllAfrica Global Media (allAfrica.com). To contact the copyright holder directly for corrections — or for permission to republish or make other authorized use of this material, click here.