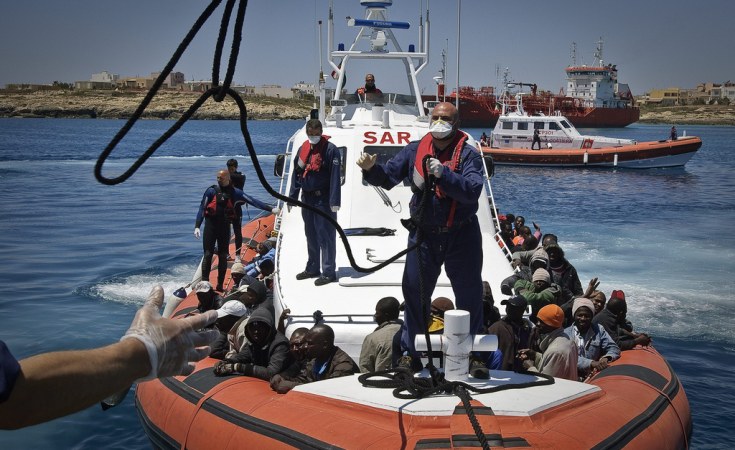 UNHCR / F.NOY
A boat of Italian Cost Guards is approaching Lampedusa to disembark 142 migrants, including 30 women and 3 children, coming from Tripoli (file photo).
The New Times (Kigali)
By Collins Mwai

The deal will be signed in Addis Ababa between the Government of Rwanda, the African Union and the United Nations High Commissioner for Refugees.

The Rwandan government will today sign an agreement to host 500 refugees from Libya.

The deal will be signed in Addis Ababa, Ethiopia between the Government, the African Union and the United Nations High Commissioner for Refugees, according to the Ministry of Emergency Management.

This follows a commitment by the Government in 2017 to host African refugees trapped in Libya, as European nations stepped up migrant controls.

The Memorandum of Understanding will, among other objectives, establish the working terms and conditions for an Emergency Transit Mechanism (ETM) in Rwanda.

The mechanism will serve as a safe pathway for refugees, asylum-seekers and other persons in need of protection who are currently trapped in Libya or face serious protection risks.

According to details of the draft MoU seen by The New Times, the mechanism allows up to 500 refugees at any given time and the first batch will be in Rwanda in the "coming weeks".

On arrival, the refugees will be accommodated in Gashora Reception Centre in Bugesera District.

The Centre will be managed by the Ministry in charge of Emergency Management in coordination with UNHCR which will fully fund the operations of the ETM.

According to the tentative agreement, the mechanism is established to temporarily host evacuees for their stay in Rwanda, while durable solutions, including repatriation and resettlement, are being identified.

The length of stay of evacuees will be subject to on-going discussions between the Government and UNHCR.

Other aspects of the draft MoU include the rights of the refugees such as access to medical care, school and work.

The refugees will also benefit from projects equipping them with income-generating skills.

Today's signing follows a months' long process after the Government's commitment in November 2017.

Earlier this year in April, a delegation from the African Union and UNHCR held a meeting in Kigali with the Government, European Union and International Organization for Migration.

At the meeting, it emerged that evacuating refugees from Libya was an urgent task and there was a need to set up an Emergency Transit Mechanism like the one in Niger or Romania.

The following month, in May, the Government confirmed readiness to welcome the refugees.

In July, the Government and its partners in the task undertook a joint mission to visit a similar mechanism in Niger to understand how it handled refugees transferred from Libya, their management in the camps, and resettlement to western countries.

Reports indicated that the refugees, most of them from West African countries, were openly being sold in modern-day slave markets in Libya.

The United Nations estimates that almost 5,000 refugees are in detention in Libya, about 70 per cent of whom are refugees and asylum seekers, with most of them having been subjected to different forms of abuse.

This is against the backdrop of accusations levelled against the EU over the plight of migrants.

Rwanda is home to hundreds of thousands of refugees mainly from DR Congo and Burundi.