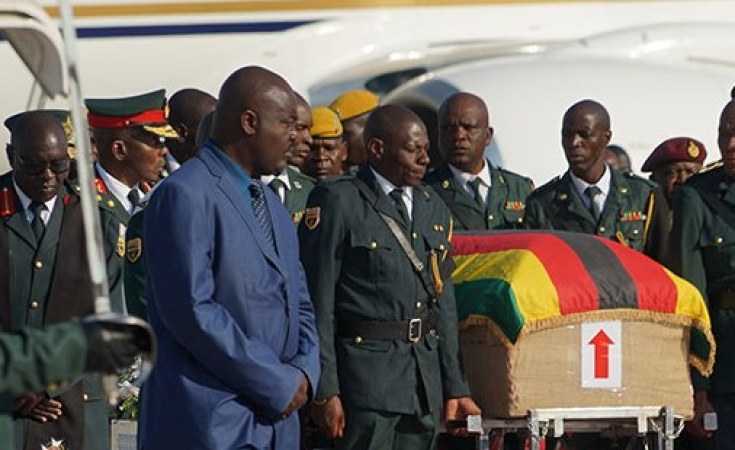 The body of Zimbabwe founding leader Robert Mugabe has arrived back in the country, to be welcomed with a guard of honor. However, discord prevails over both the former strongman's legacy and his proposed burial site.

Mugabe's body arrived Zimbabwe's main airport on Wednesday, amid controversy over where he would be buried and his overall legacy.

The former leader's body arrived in the capital, Harare, for a welcome at the Robert Gabriel Mugabe International Airport which still bears his name. A military guard of honor stood to attention as the casket, draped in the national flag, was removed from the aircraft.

Mugabe died in a Singapore hospital last week less than two years after he was ousted by his own military.

"The light which led to independence is no more, but his works, his ideology will continue to guide this nation," President Emmerson Mnangagwa told those present at the airport ceremony.

Mugabe's wife Grace was present alongside Mnangagwa, Mugabe's long-time ally who eventually took his place. Before Mugabe was toppled, opponents claimed Grace was being positioned to take over from her husband.

The body was subsequently taken to the Mugabes' Harare villa, where his family had gathered to mourn.

On Thursday and Friday, the body was set to lie in state at Harare's Rufaro Stadium for the public to pay respects. The stadium is where Mugabe took his oath of office in 1980, taking the reins of power from colonial Rhodesian Prime Minister Ian Smith after a protracted guerilla war.

Mugabe's body will be buried at an as-yet-unannounced site, amid friction between the ex-leader's family and Mnangagwa's government about the location.

While the administration has said Mugabe is to be buried at the Heroes' Acre state monument -- a place reserved for leading officials of Zimbabwe's ruling ZANU-PF party -- some family members say he should be buried according to Zimbabwean tradition, at his birthplace.

Among those expected to attend a state funeral on Saturday were Chinese President Xi Jinping, former Cuban leader Raul Castro and a dozen African presidents, including South Africa's Cyril Ramaphosa.

A nation in mourning?

After Mugabe's death, Mnangagwa declared him a "national hero", with flags flying at half-mast across Harare.

But the legacy of Mugabe's 37-year rule among ordinary Zimbabweans is disputed, with the former leader having been ousted by the military as public opposition grew over his stewardship of the country.

Mugabe was seen as a country's liberator from white minority rule and lauded for broadening people's access to education and land.

However, he left behind an economy wrecked by hyperinflation and entrenched corruption and was criticized for his brutal crackdowns on political opponents.

Mugabe's Family Agrees to His Burial at National Heroes Acre
Tagged:
Copyright © 2019 Deutsche Welle. All rights reserved. Distributed by AllAfrica Global Media (allAfrica.com). To contact the copyright holder directly for corrections — or for permission to republish or make other authorized use of this material, click here.