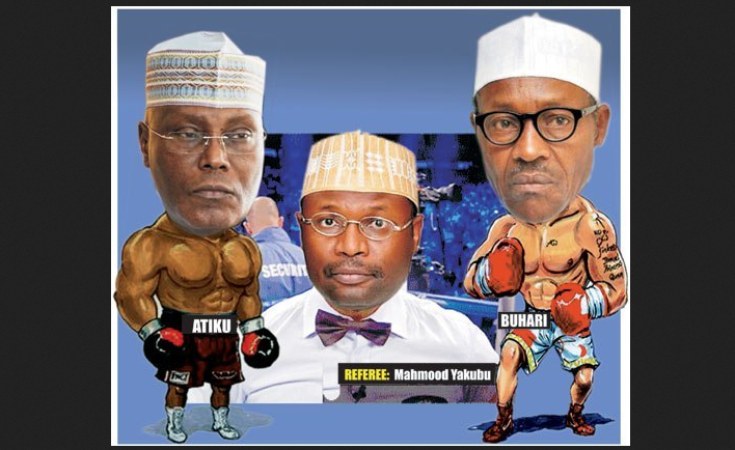 The presidential election petition tribunal has given its verdict in the petition brought by the Peoples Democratic Party (PDP) and Atiku Abubakar challenging the February 23 election won by President Muhammadu Buhari.

Mr Buhari also won the election in most of Nigeria's States as well as met the constitutional requirement of at least 25 per cent of votes in 24 states.

The PDP, which had ruled Nigeria for 16 years before 2015, challenged the election results on many grounds.

The PDP and its presidential candidate, Atiku Abubakar, had argued that the ruling APC connived with government institutions like the electoral umpire, INEC, and security officers to rig the election in favour of Mr Buhari.

The PDP also alleged that INEC manipulated the results and that original results sent to an INEC 'server' electronically by electoral officials showed a PDP victory. The PDP and Mr Abubakar sought access to the server.

The party also alleged massive non-compliance with election guidelines in a majority of the polling units.

The PDP further challenged the emergence of Mr Buhari as a candidate for the elections on the grounds that he failed to meet educational qualifications to contest the election.

According to section of the electoral act, a petition of this nature must be determined before the expiration of 180 days.

Although the petition was filed on March 18, hearing into the main issues did not commence till July 3.

The PDP cited the active membership of Mrs Bulkachuwa's husband, Mohammed Bulkachuwa, and son, in the APC, as reasons for their objection.

The petitioners also alleged that a statement made by Mrs Bulkachuwa at the opening session of the tribunal suggested that "she had taken a stand in favour of the APC when she submitted that elections were bound to result in a dispute no matter how properly conducted."

Following that objection by the petitioners, Mrs Bulkachuwa recused herself. This resulted in the emergence of Garba Mohammed as the chairman of the tribunal.

Subsequently, on July 3, the PDP began its hearing and presented 62 witnesses to support its claim.

Among the witnesses presented by the PDP was the media adviser and spokesperson for Mr Abubakar, Segun Showunmi; a former ally of President Buhari, Buba Gamadima and a former aviation minister, Osita Chidoka who appeared as the last witness among others.

The PDP also showed a video clip where an INEC resident electoral commissioner from Bayelsa State, Mike Igini, made comments related to the central server which the petitioners believed was in support of their claim.

According to the video, Mr Igini submitted the election results would be transmitted through a central server, a point alluded by the petitioners in their request.

The APC reacted to the deposition of the video evidence by producing a similar video clip where the INEC Chairman, Mahmood Yakubu, debunked claims regarding the server.

The PDP had named INEC, Mr Buhari and the APC as respondents in the suit.

Consequently, the respondents made several applications also challenging the petition by the PDP.

The first respondent, namely INEC, questioned the validity of the PDP petition "because it did not include Vice President Yemi Osinbajo whom INEC described as a necessary party to the matter".

But in a ruling on the issues, the tribunal said section 137 (2) of the constitution does not imply that Mr Osinbajo is a necessary party to the suit.

According to the court, the section mentioned above was specific in its mention of those to be categorised as parties to a petition.

"It is the conclusion in the judgement that running mates to an election are not a necessary party," the court ruled.

The tribunal then dismissed the application filed by INEC.

The court also dismissed an application by INEC suggesting that the PDP petition was not properly attested to, by the lead counsel, Levi Uzoukwu.

The five-member panel then decided against a submission by the APC that the claims concerning President Buhari's certificate were pre-election in nature and should not have been raised as part of the PDP's petition.

According to the court, section 138 which focused on the educational requirements for contesting "did not refer to the issues raised in the section as pre-election in nature".

Regarding the allegation that Mr Buhari was not qualified to contest in the first place, the court ruled that there was sufficient evidence before it to conclude that President Buhari "was not only qualified but that he was eminently qualified to have contested the election".

The PDP challenged Mr Buhari's results on the grounds that the Cambridge University and the West African Examination Council copies of the result contained a number of discrepancies including the spellings of Mr Buhari's name.

"There is no doubt the second respondent is not only qualified but is also eminently qualified."

The court also said Mr Buhari "is not the maker of his certificate, and there is nothing to show that the errors in the names of Buhari as indicated on the certificates from Cambridge and WAEC implied that the certificate did not belong to Mr Buhari".

"I am of the opinion that whether it is Muhammadu Buhari with a U and Mohammed Buhari with an O, they relate to the same person," the court ruled

In another application by INEC challenging the PDP's failure to name the security operatives as parties to the election, the court ruled that INEC was right in submitting that the PDP ought to have included the security officers mentioned in the petition.

The PDP had argued that the government rigged the election by deploying security operatives to disrupt the proper conduct of the elections.

Reading through the section of the petition regarding the controversies surrounding the alleged use of a central server, the court noted that the PDP had said that Section 9 of the Electoral Act was amended in 2015.

"The issue is: Can it truly be said that the section amended actually empowered INEC to transmit election results electronically?

"The court only has a duty to interpret the law. The court has no power to amend the law."

The court read out the import of the provision. It stated that Section 22 (a) does not provide for electronic transmission of results.

The court then read through other sections of the law.

"It is undeniable that the transmission of election result is manual at different and all levels of the elections at different stages from the states to the national level.

"I'm not aware that the card reader machine has replaced the voters' register," the court ruled.

Regarding the allegation that the election was marred with widespread irregularities, the court said the petitioners pleaded "that so many of their agents were situated in various polling units and that members of the first respondents connived with security agents to conduct massive rigging".

"They also alleged that no real voting took place in Dekina Local Government Area, among others," the judge said.

The judge, however, added that the "PDP failed to call the polling unit agents who would have testified that they were arrested harassed or affected by the violence pictured by the petitioners."

"There is no admissible evidence on record to support the petitioner's allegations," the court ruled.

Subsequently, the court decided that the PDP had failed to satisfactorily prove its allegation and dismissed the petition in its entirety.

All the panel members agreed with the lead judgement.

For Mr Abubakar and his party, the next option will now be to head to the Supreme Court for legal redress.

Atiku, Ambition and the Endgame

It's Time to Move On, Buhari Says After Court Victory Over Atiku

Buhari Won't Seek Third Term - Nigerian Presidency
Tagged:
Copyright © 2019 Premium Times. All rights reserved. Distributed by AllAfrica Global Media (allAfrica.com). To contact the copyright holder directly for corrections — or for permission to republish or make other authorized use of this material, click here.