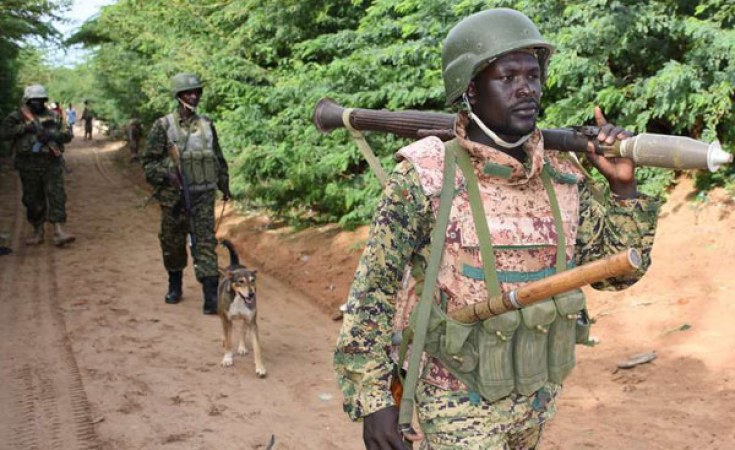 The overall death toll for the African Union Mission in Somalia (Amisom) is probably in the range of 1,800 troops, says a new report by a US expert on the war against Al-Shabaab.

The findings by scholar Paul Williams are based, he states, on five sources. The most comprehensive data comes from African Union (AU) financial compensation records on sums paid to families who lost loved ones in the years since Amisom's deployment in 2007.

Prof Williams, author of the 2015 book 'Fighting for Peace in Somalia,' also cites a new data set listing attacks on Amisom soldiers and a "Memorial Wall of Our Heroes" erected in the AU headquarters building in Ethiopia.

His estimated Amisom death toll, contained in a report released on Tuesday by the New York-based International Peace Institute, does not include calculations of losses suffered specifically by Kenya or the other countries that contribute troops to Amisom.

"A plausible estimate of Amisom's fatalities between March 2007 and December 2018 could be between 1,483 and 1,884," writes Prof Williams, an international affairs scholar at George Washington University. "It is likely that the real number is closer to the higher end of this range than the lower end," he adds.

His computation does not reflect fatalities likely suffered by Amisom during a three-and-a-half-month period for which no data is currently available. The estimate also does not include any of the deaths that have occurred so far this year.

It is impossible to provide a definitive figure for the number of Amisom dead because troop-contributing countries have not released lists of their personnel killed in Somalia, Prof Williams notes.

"All peacekeepers who make the ultimate sacrifice should have their service publicly recognised," the author argues. "Not doing so is not only immoral, but it is likely to have a negative effect on morale." The non-disclosure policy could impede families' efforts to claim financial compensation to which they are entitled, Prof Williams suggests.

In addition, "not releasing full details about peacekeeper deaths in Somalia plays into Al-Shabaab's hands, who are often able to dominate the media terrain in the absence of an authoritative and trusted AU or Amisom voice."

"A mission that doesn't provide the whole truth about its own dead cannot be surprised if Somalis think it lacks credibility when trying to pronounce on other issues," Prof Williams writes.

Newly released AU financial statements for 2014 through 2018 show that the AU paid a total of $74.6 million in death and disability compensation between 2014 and 2018.

Based on the ratio of death and disability payments derived from the AU's earlier report, it is likely that 79 percent of the $74.6 million covered compensation for deaths and 21 percent for disability, Prof Williams surmises.

That calculation produces a figure of 1,179 payments for deceased personnel and 1,567 payments for injured Amisom members.

The 79:21 ratio is plausible, Prof Williams suggests, due to "Amisom's numerous remote forward operating bases, the mission's limited capacity for rapid casualty evacuation (partly owing to a lack of rapid response forces and appropriate helicopters), and the relatively poor state of its medical facilities."

The AU's wall of heroes in its Addis Ababa headquarters lists the names and ranks of peacekeepers who have died in AU-authorised operations in Burundi, the Central African Republic and Sudan as well as Somalia.

Amisom has its own memorial for fallen personnel outside its force headquarters in Mogadishu, he adds. "However, it lists no names or numbers."

Its dedication reads: "In memory of the officers, men and women of the African Union Mission in Somalia (Amisom), and the Somali National Security Forces (SNSF), who lost their lives in pursuit of peace and stability in Somalia."