The rate of murder, sexual offences and assault has risen in South Africa. We summarise data on eight categories of crime from the police's statistics for April 2018 to March 2019.

South Africa's crime statistics for 2018/19 were released by the police in parliament on 12 September 2019. Minister of police Bheki Cele began the briefing by saying the statistics were "not very rosy".

This factsheet presents the latest statistics in three ways: first, the number of reported crimes (21,022 murders, for example), then the average crimes per day (58 murders every day).

A third, important, method is crime rates (36.4 murders per 100,000 people). This provides insight into the extent of crime relative to the population. It's vital for accurately determining whether crime has increased or decreased between years, and showing which areas have a higher risk of crime.

The factsheet summarises eight crimes of public interest. They cover the period 1 April 2018 to 31 March 2019. The Institute for Security Studies has called for more regular crime statistics, saying the "statistics released this week are almost six months out of date and do not reflect the current spate of high-profile violent crimes reported in the media".

Murder is the unlawful and intentional killing of another person. Murder statistics are considered the most reliable, according to the Institute for Security Studies. This is because most murders can be independently verified.

"Over the past seven years murder has risen by 35%," the Institute for Security Studies announced in reaction to the crime statistics. "This reverses the downward trend that was evident between 1995 and 2011 during which time murder decreased by 55%."

Murders of women and children

But the police's rape statistics should not been viewed as an "accurate measure of either the extent or trend of this crime", the Institute for Security Studies warned.

There is no recent, nationally representative estimate of how many women are raped in South Africa each year.

Common assault is defined as the "unlawful and intentional direct and indirect application of force to the body of another person" or the "threat of application of immediate personal violence to another".

Assault with the intent to inflict grievous bodily harm

A robbery is committed when a person unlawfully and intentionally forcefully removes and appropriates property belonging to another person. This is a contact crime where force or violence is used against another person.

Robbery with aggravating circumstances occurs when a person uses a gun or weapon to commit a robbery.

House robberies occur when people are confronted and become victims of theft in their homes.

South Africa's 2017/18 victims of crime survey revealed that only 59% of victims reported the crime to the police.

A house burglary occurs when a person "unlawfully and intentionally breaks into a building" with the intention to take something from the premises. This is a property crime. There is no contact between victim and perpetrator.

It was reported as the most feared crime in South Africa in the 2017/18 victims of crime survey.

South Africa's 2017/18 victims of crime survey revealed that 52.8% of households did not report the crime because they thought the police couldn't do anything about it.

Theft of cars or motorcycles

Previous Story
Murder Rate Increases By 1.4%
Next Story
How Useful Are Police Crime Stats? Here's What We Can Expect From This Year's Figures

How Useful Are Police Crime Stats? Here's What We Can Expect From This Year's Figures 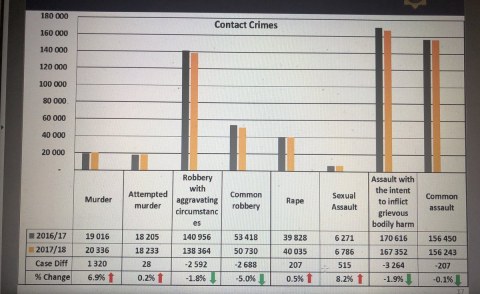 Murder Rate is Up in South Africa - Crime Statistics 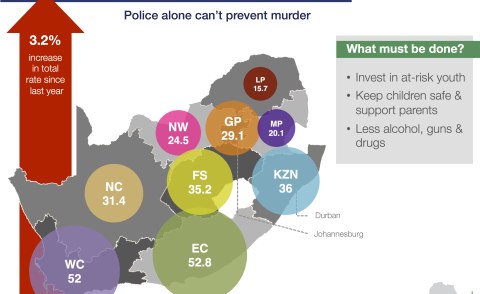 Should South Africa's Sexual Offences Register Be Made Public?
Tagged:
Copyright © 2019 Africa Check. All rights reserved. Distributed by AllAfrica Global Media (allAfrica.com). To contact the copyright holder directly for corrections — or for permission to republish or make other authorized use of this material, click here.