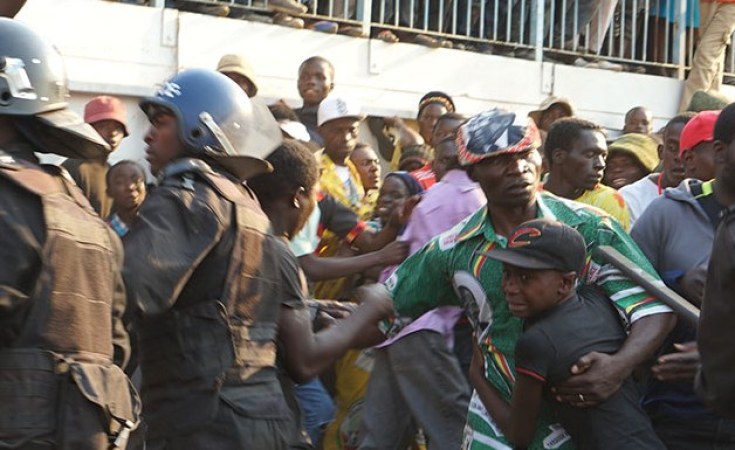 Idah Mhetu/New Zimbabwe
A young boy who was caught up in the melee is assisted by security at the the public viewing of Robert Mugabe's body, September 12, 2019.
Deutsche Welle (Bonn)

Several people have been injured in a crush to see Robert Mugabe's body at a viewing in Harare. The incident comes as uncertainty over his final resting place highlights tensions between his family and the government.

A crowd of mourners eager to get a look at the body of former Zimbabwe President Robert Mugabe have surged past a police cordon, with several people injured in the pushing and shoving.

The incident occurred during the first of several days of public viewing at Rufaro Stadium in the capital, Harare, on Thursday. Mugabe's body, which was brought to the stadium by a military helicopter, was displayed in a partially open casket as thousands of adoring fans filed past.

At one point, mourners knocked down barricades and rushed toward the casket as his wife, Grace Mugabe, seated at a podium near the casket, looked on. Security forces attempted to halt the rush, beating mourners back with truncheons.

Several people were carried off on stretchers and others were treated at the site by Red Cross workers. Mugabe's body, accompanied by his wife, was eventually flown to his nearby Blue Roof residence.

Rest in peace, but where?

There has been a great deal of uncertainty over Mugabe's final resting place since his body was returned on Wednesday from Singapore, where he was seeking medical treatment.

The uncertainty has highlighted tensions between Zimbabwe's current president, Emmerson Mnangagwa -- a former Mugabe ally who led a coup to oust him in November 2017 -- and the former leader's family.

The tensions between the two camps stem from an inner-party conflict between Mugabe loyalists and pro-Mnangagwa factions within the ruling ZANU-PF party.

It was widely thought that Mugabe was grooming his wife to succeed him when he fired Mnangagwa in 2017. Mnangagwa was serving as vice president at the time.

Mnangagwa's government previously announced that Mugabe would be buried at the national Heroes' Acre site in Harare after his state funeral on Saturday. But Mugabe's family has accused the government of attempting to hijack the ceremony, and has insisted on a private burial.

Though Mnangagwa has said he was still in discussions with Grace Mugabe over the burial, Mugabe's nephew, Leo, announced that the deposed leader will not be buried on Sunday as previously planned, and will definitely not be buried at the Heroes' Acre site.

He informed reporters gathered outside Blue Roof: "The family said they are going to have a private burial. We don't want the public to come. They [the family] don't want you to know where he is going to be buried. We are not witnessing a burial on Sunday. No date has been set for the burial."

Mnangagwa also addressed reporters at Blue Roof, saying: "We said we will bury him on Sunday, but how, it will be decided. The family will have the final say."

Zimbabwe is deeply divided over the legacy of Mugabe, who died on September 6 at age 95. He is revered by many as a hero that led his country to independence, freeing it from colonial rule in what was formerly known as Rhodesia. But others revile him as an authoritarian dictator that led the country to ruin.

When Mugabe took the oath of office at Rufaro Stadium on April 18, 1980, he raised the new national flag and lit the independence flame, heralding a new era for the country.

Though he brought access to health care and education to the country's black population, his economic mismanagement and tyrannical rule soon crippled the country. It is estimated that some 20,000 "dissidents" died under his iron fist, and his seizure of white-owned farms obliterated the economy.

Such measures sparked hyperinflation and shortages of food, drugs and fuel, and turned the strongman into an international pariah. Though his legacy as a liberator still rings loud across the continent, Zimbabweans continue to struggle with the disastrous economy that his 37-year rule left behind.

What Happens to Grace Mugabe Now?
Tagged:
Copyright © 2019 Deutsche Welle. All rights reserved. Distributed by AllAfrica Global Media (allAfrica.com). To contact the copyright holder directly for corrections — or for permission to republish or make other authorized use of this material, click here.