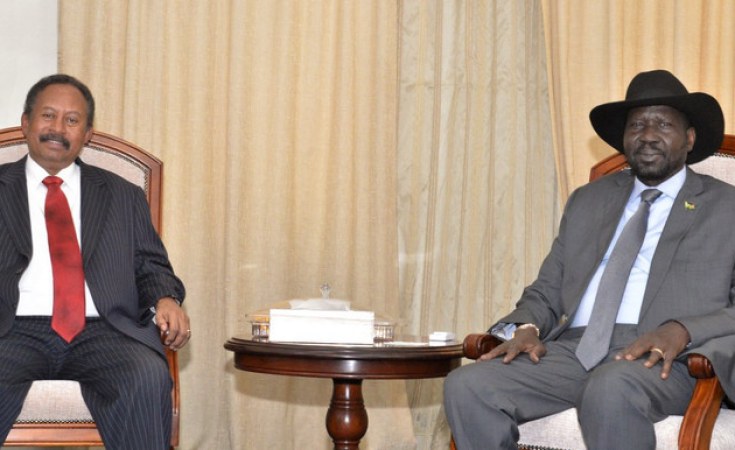 Juba — Sudanese Prime Minister Abdalla Hamdok arrived in the South Sudan capital of Juba today for meetings with the South Sudan President Salva Kiir, and to participate in negotiations (brokered by Kiir) with Sudan's armed movements.

Hamdouk and Kiir discussed bilateral relations between the two countries, as well as the opening of the borders between South Sudan and Sudan for a free trade.

Ahead if his visit, Hamdouk said yesterday that he is optimistic that peace in Sudan can be achieved. In an interview with the BBC Hamdouk said yesterday that he will go to Juba, the capital of South Sudan, on Thursday to negotiate with the leaders of the armed movements. He considers these armed movements as a part of the Forces for Freedom and Change.

The prime minister will be accompanied by the ministers of Foreign Affairs, Interior, Trade and Industry, and Energy and Mining. It will be Hamdouk's first foreign visit since he became prime minister. He will return to Khartoum on Friday.

Hamdouk's visit follows the signing of a Declaration of Principles for a comprehensive peace process, a roadmap that paves the way for the negotiating process between the parties concerned, signed by representatives of the Sudanese government led by Member of Sudan's Sovereign Council and commander of the Rapid Support Forces (RSF) militia, Lt Gen Mohamed Hamdan 'Hemeti' and delegations of the Sudan Revolutionary Front (SRF) coalition of armed movements and the Sudan People's Liberation Movement-North faction led by Abdelaziz El Hilu.

One of the most prominent provisions of the Declaration of Principles is a comprehensive ceasefire between the Sudanese government and armed movements.

The Declaration of Principles paves the way for the creation of measures to open crossings and humanitarian access to war-affected areas. In addition, it provides for the release of prisoners of war and the abolition of death sentences for leaders of armed movements.

The delegations agreed that war issues in Sudan would be resolved in two months of peace talks ending before the end of this year.

Yasir Arman, member of the SRF negotiating delegation, said the talks will start on October 14 and to sign a peace agreement on December 14, "with the finalisation of the peace process within six months specified in the Constitutional Document".

Member of the SRF negotiating delegation, Ahmed Tugud, said that they will hold consultative meetings in the next two weeks in the Egyptian capital Cairo to agree on the venue of talks scheduled with the Sudanese government in October.

Speaking to reporters in Juba, Tugud said that the capital Juba is still one of the options so far to host the peace negotiations, adding that the SRF is looking for other platforms for the talks to ensure the involvement of all regional and international partners.

The decision on the platform for the peace talks will be taken after consultations with regional and international partners, Tugud said.

He said that consultations with the government delegation discussed procedural issues before the talks officially started, noting that they had asked the Sudanese government to create an enabling environment before the negotiations began.

Not Implementing Peace Accord Puts South Sudan at Risk - UN
Tagged:
Copyright © 2019 Radio Dabanga. All rights reserved. Distributed by AllAfrica Global Media (allAfrica.com). To contact the copyright holder directly for corrections — or for permission to republish or make other authorized use of this material, click here.